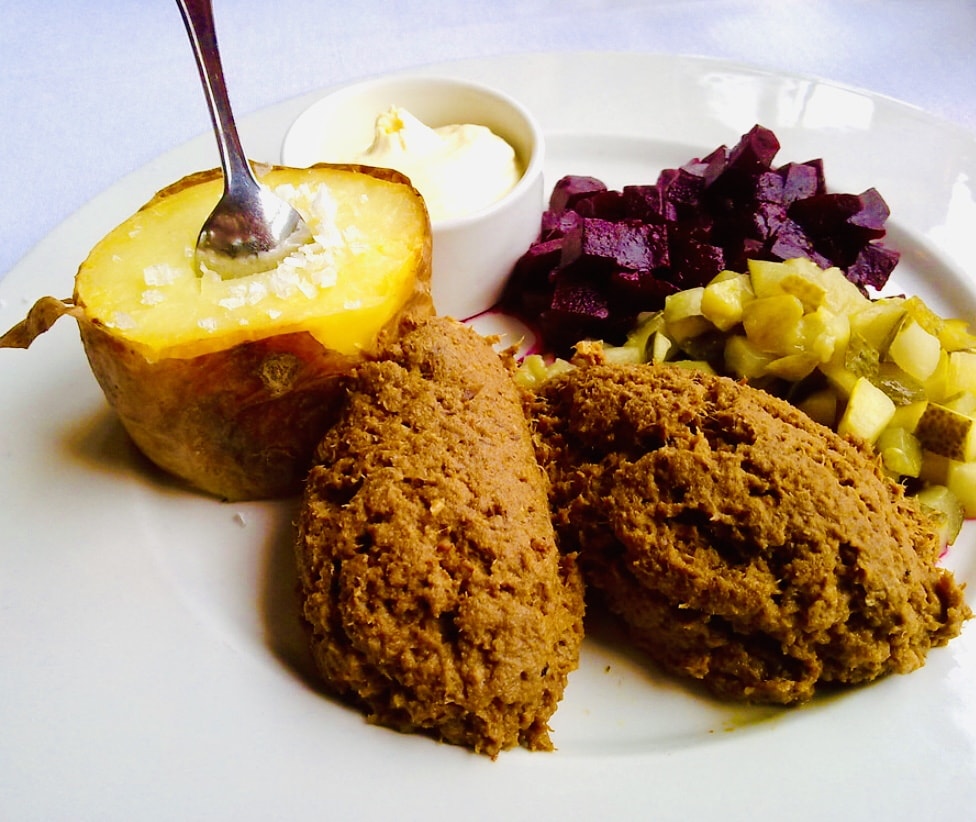 Citizens, it is a decided fact that Finland is a place I consider a second home, as is true for most of the Nordic regions. This dish in many ways reflects the veritable essence of TFD, as it is a fusion of German Jewish, Russian and Finnish recipes and a synthesis of humble and gourmet elements – the very definition of myself in all ways! 😀

Vorschmack or forshmak (Yiddish: פֿאָרשמאַק‎, from archaic German Vorschmack, “foretaste” or “appetizer”) is an originally East European dish made of salty minced fish and/or meat. Different variants of this dish are especially common in Ashkenazi Jewish and Finnish cuisine. Some varieties are also known in Russian and Polish cuisine.

In Jewish cuisine,, according to legendary food historian Gil Marks, the German name points to the possible Germanic origin of this dish. William Pokhlyobkin describes it as an originally East Prussian hot appetizer which was made of fried herring. The dish was adopted and brought eastwards by Ashkenazi Jews which transformed it into a cold appetizer, a pâté made of chopped brined herring. While the name forshmak became common in Ukraine, Polish and Lithuanian Jews usually called it gehakte herring (“chopped herring”).

Traditional recipes include chopped hard-boiled egg, onion and grated fresh apple. Sometimes potatoes are also added. The appetizer is usually served as a salad or as a spread on bread, crackers or kichlach (cookies). It may also be eaten for breakfast or as a main course, usually with boiled potatoes.

Although nowadays vorschmack is mainly associated with Jewish cuisine in Russia, historically different versions of this dish (Russian: форшмак) were known there. These were usually hot zakuski (appetizers) or breakfast dishes. A Gift to Young Housewives, a classical Russian cookbook by Elena Molokhovets, provides three recipes of hot vorschmack in its first edition (1861) and further variants were added in subsequent editions.

In one recipe, meat (veal or beef), herring, white bread and onions are minced, mixed with smetana (sour cream) or cream and baked. Other recipes include only herring (without meat), as well as other ingredients, such as potatoes, eggs and apples. Even more elaborate recipes with further details on cooking techniques are given in another classical Russian cookery textbook,

In Finnish cuisine, vorschmack is usually prepared out of ground meat, anchovies or herring and onions. The dish is usually garnished with potatoes, pickles and smetana (sour cream). Snaps is usually served in combination with eating vorschmack. Some recipes include cognac.

There are several stories regarding the origin of the dish, but it has become a traditional Finnish dish as it was one of the favorite appetizers of the Finnish statesman, war hero and gourmand Marshall Gustaf Mannerheim. Some sources say Mannerheim brought the dish to Finland from Poland or Russia, but there have not been any definite sources for these claims.

It was taken to Finland after 1917 by Marshal Mannerheim, who had served at Russian court as officer of the last Czarina’s Chevalier Guard. The story says that Mannerheim took the recipe first to the Kämp hotel. However, the chef at the Kämp was not interested in vorschmack, and therefore Mannerheim brought the recipe across the Esplanade Park to the Savoy restaurant.

The restaurant Savoy at the top floor of one of the buildings around the Esplanadi in central Helsinki is now famous for its vorschmack. The restaurant used to be frequented by Mannerheim and Mannerheim’s table at the Savoy was always reserved and, out of respect, no one would ever consider demanding to be seated there. Savoy still today keeps a similar style decor and menu as in the days of Mannerheim. , in fact!

My version of this recipe combines elements from the original Jewish recipe with its use of grated sour apple, but is otherwise served in the Finnish style and seasoned to my specific tastes. I recognize this is an unusual recipe with ingredients Americans would normally not think to put together. Trust me, it’s delicious – just think of it as a hybrid between pâté and steak tartare, with an element of umami from the salty fish.