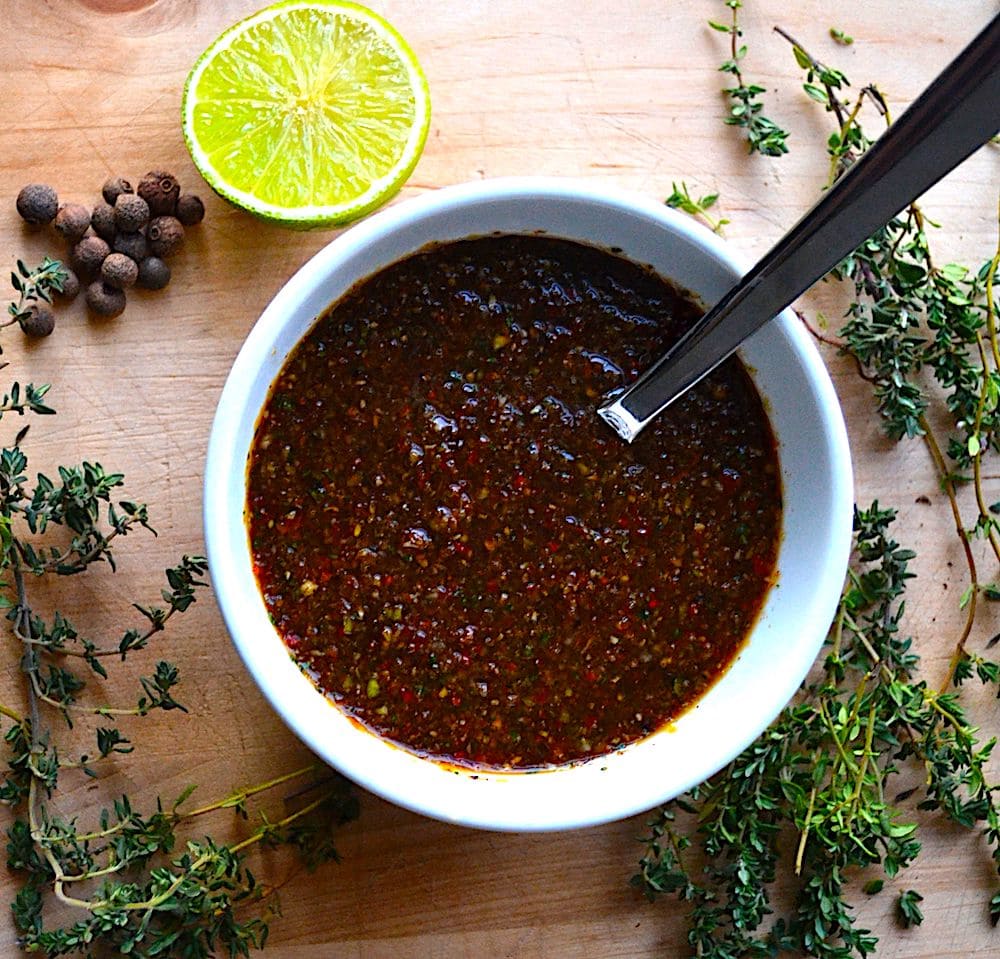 Citizens, we continue our glorious march onwards in the week of sauces to include one most beloved by your glorious Leader – the spicy and herbaceous masterpiece that is Jamaican jerk sauce!

Jerk is a style of cooking native to Jamaica, in which meat is dry-rubbed or wet marinated with a hot spice mixture called Jamaican jerk spice. It was originally developed by African slaves who fled into the wilds of Jamaica when the British invaded the island in 1655.

Adapting to their new surroundings, the slaves made use of the natural food sources available to them, creating the spicy sauce and slowly cooking the meat over a smoking wood fire. Nowadays, the smoky taste of the meat is achieved using various alternative cooking methods, including the use of modern wood burning ovens.

The meat is normally, but not limited to, chicken or pork, and the main ingredients of the spicy jerk marinade sauce are pimento and chili peppers. Jerk cooking is popular in Caribbean/West Indian communities throughout North America and Western Europe.

The term jerk is said to come from the word charqui, a Spanish term of Quechua origin for jerked or dried meat, which eventually became the word jerky in English. Jerk is also derived from the action of jerking, which referred to poking meat with holes so that flavor could more easily be absorbed.

Jamaican jerk sauce developed as an adaptation by escaped enslaved Coromantee Africans in Jamaica. When the British invaded Jamaica in 1655 the Spanish colonists fled, leaving behind a large number of African slaves. Rather than be re-enslaved by the British, they escaped into Jamaica’s mountainous regions where they mixed in with the local Taínos.

Jamaican jerk sauce primarily developed from formerly enslaved Africans, seasoning and slow cooking wild hogs over allspice wood, which was native to Jamaica at the time and is the most important ingredient in the taste; over the centuries it has been modified as various cultures added their influence.

The cooking technique of jerking, as well as the results it produces, has evolved over time from using pit fires to old oil barrel halves as the container of choice.

Around the 1960s, Caribbean entrepreneurs seeking to recreate the smoked pit flavor in an easier, more portable method came up with a solution to cut oil barrels lengthwise and attach hinges, drilling several ventilation holes for the smoke. These barrels are fired with charcoal, which enhances the spicy, smoky taste.

Alternatively, when these Jamaican-style cooking methods are unavailable, other methods of meat smoking, including wood burning ovens, can be used to jerk meat. However, oil barrels are arguably one of the most popular cooking methods for making jerk in Jamaica. Most jerk in Jamaica is no longer cooked in the traditional method and is grilled over hardwood charcoal in a steel drum jerk pan.

Citizens, my version of the classic Jamaican sauce/marinade will set your tongues tingling – do give it a try! 😀