Citizens – everyone loves hummus – but no one pronounces it correctly outside the Middle East! Americans pronounce it “hum-mus” but the correct way in Hebrew and Arabic is “choo-moose”, where “ch” is a guttural
sound we don’t have in English.

With that out of the way: hummus is a dip or spread made from cooked, mashed chickpeas (or other beans), blended with tahini, olive oil, lemon juice, salt and garlic.

Today, it is popular throughout the Middle East (including Turkey), North Africa (including Morocco), and in Middle Eastern cuisine served around the globe.

Hummus is an Arabic word (حمّص ḥummuṣ) meaning “chickpeas,” and the complete name of the prepared spread in Arabic is حمّص بطحينة ḥummuṣ bi ṭaḥīna, which means “chickpeas with tahini”.

Israelis love this dish and some of the finest versions of the recipe I’ve eaten have been in the Jewish, Arab and Christian quarters of Jerusalem! There is *great* rivalry in the Middle East as to which country has the ultimate recipe and therefore “owns it”, but TFD supports all sides in their love of this felicitous dish!

That said, there is some history that supports Egypt as the origin point. The earliest known recipes for a dish similar to hummus bi tahina are recorded in cookbooks published in Cairo in the 13th century.

A cold purée of chickpeas with vinegar and pickled lemons with herbs, spices, and oil, but no tahini or garlic, appears in the Kitāb al-Wusla ilā l-habīb fī wasf al-tayyibāt wa-l-tīb; and a purée of chickpeas and tahini called hummus kasa appears in the Kitab Wasf al-Atima al-Mutada: it is based on puréed chickpeas and tahini, and acidulated with vinegar (though not lemon), but it also contains many spices, herbs, and nuts, and no garlic. It is also served by rolling it out and letting it sit overnight, which presumably gives it a very different texture from the classic hummus bi tahina.

My version does include some eccentric but delicious touches – the use of a bit of white Japanese Miso to add an undefinable “umami” taste, plus some roasted garlic and a touch of smoked salt. Please note all of these are OPTIONAL – you can leave them out for a still off-the-charts-level excellent traditional hummus!

I have respectfully cribbed the instructions on how to soak the chickpeas from the famous recipe by Chef Ottolenghi. His directions are simply impeccable!

So why on Earth do I name my recipe after the famous modern artist – because immediately before serving, you get to go “Jackson Pollock” on the recipe!

For those unfamiliar with his art, it looks like this: 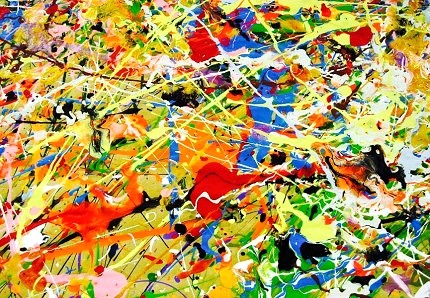 TFD currently has a total of 1,343 posts and 1,093,854 words written since December of 2015! Add your voice to My 50,000+ dedicated readers, comment on My recipes and thus become an active member of TFD Nation! Looking for a particular recipe? Search for it in the box above or via the category tags below - there are THOUSANDS of the finest in world and historic recipes here!

✔ Be In The Know, Citizens!