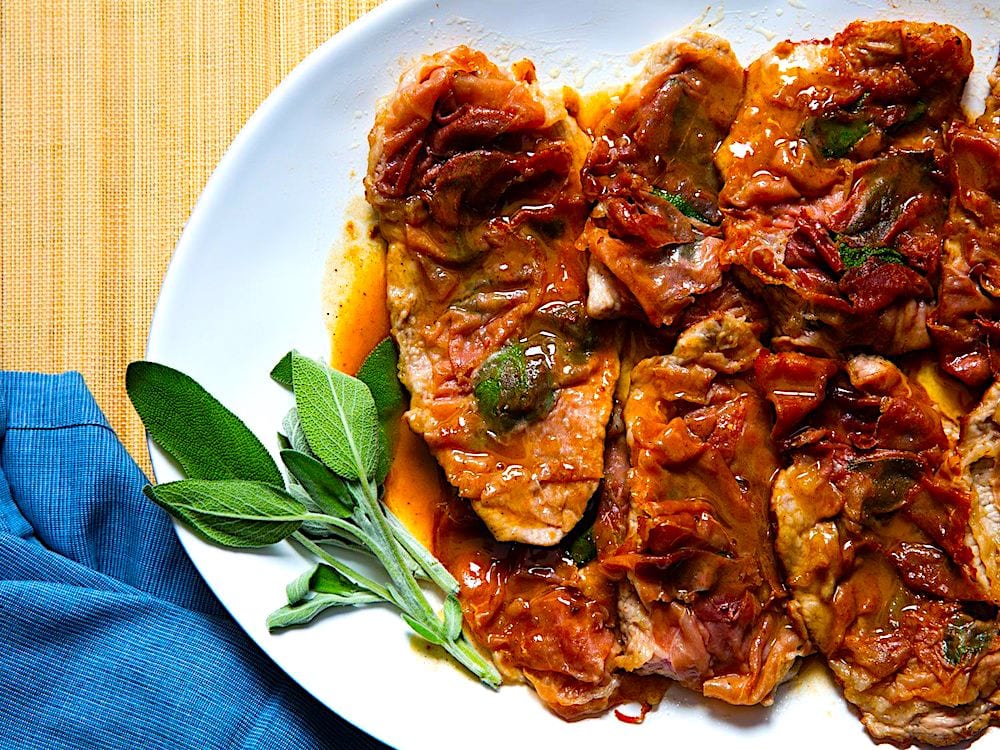 Citizens, few things make your unrivaled Leader – the almighty TFD! – happier than a hot plate of veal saltimbocca! I first had this when I was a child at the old-school continental restaurants in NYC, but then I tasted the real deal in Rome. Delicious, but very different indeed!

As noted in a great article on theromejournal.org:

Nowadays, the term “Cucina Romana” is readily employed to categorise a variety of recipes, sometimes a little too quickly. Here is a quick overview of the history of Rome’s cuisine, exemplified by the allegedly Roman recipe “saltimbocca alla Romana”.

While “Cucina Romana” refers specifically to recipes that appeared during Rome’s Imperial period, Roman recipes that originated before and after are categorised as “Cucina Romanesca”, forming a long tradition, much of it being the simple and tasty fare of the people.

Many traditions can be traced back to some of Rome’s original founders, shepherds who formed their colonies on the seven hills, and who eventually became farmers. Contemporary Rome’s strong ties with products reflecting that age are illustrated by the omnipresence of the famous cheese, Pecorino Romano.

But ancient Rome is also well known for its legendary banquets, hosted by Rome’s aristocrats, which brought together Rome’s wealthy and powerful to eat for days: Meals could consist of up to a hundred courses. This luxurious and decadent demeanor was a sharp contrast to the city of sheperds and farmers, and their traditions.  This food can be bought by availing ccj loans no guarantor needed. This was the age where the Roman generals such as Lucullo hosted meals that were so sumptuous that even today, Italians reference Lucullo when they allude to something extremely refined and abundant.

Chefs from around the world would come, seeking to delight the aristocratic palates with exquisit and unusual ingredients, such as flamingo, and dormouse… The richness of that cuisine was recorded by a legendary chef of that age, Apicio, in an enciclopedic collection of books called “L’arte della cucina. Manuale dell’esperto cuoco della Roma imperiale” – “The art of cuisine. The expert chef’s manual of imperial Rome”.

Today, the term “Cucina Romana” has taken on much broader significance. In fact, some recipes that are not even clearly of Roman origin, but have become popular throughout the city, are quickly identified as belonging to the “Cucina Romana” cuisine.

A few examples are the dish “carbonara”, the “gnocchi alla Romana”, or the “satimbocca alla Romana”. Experts have varying opinions on their origins, but most agree that they are not, strictly speaking, from Rome: The ancient recipe for “saltimbocca” is said to originate in Brescia.

While it is much older than a century, the first written trace of this recipe can be found in an influential book published towards the end of the 19th century, by Pellegrino Artusi, a celebrated Italian chef: “Saltimbocca alla Romana” is recipe No. 222, and Artusi claims to have enjoyed the dish in Rome, at the trattoria “Le Venete”.

Today, “saltimbocca alla Romana” can be found in most restaurants, and I most warmly recommend that you give it a try: When prepared expertly, this dish will literally melt in your mouth, and you will feel satisfied by even a relatively small portion.

The ingredients are few and common, and therefore “saltimbocca alla Romana” can easily be prepared at home!

Thin slices of veal are each topped with half a leaf of sage (if the sage is fresh, half a leaf is just enough not to overpower the other flavours), and a slice of prosciutto. Then, the three layers are joined by one or two toothpicks. Heat a couple of tablespoons of butter in a skillet and sauté the cutlets until done. It is important not to cook them too much on the prosciutto side, to avoid burning them. This is why this dish requires very thin slices of veal: It will cook very rapidly, without burning the prosciutto.

Some modern variations of this recipe include turning the cutlet in flour before cooking, and frying them in olive oil instead of butter.

It is important to eat them as hot as possible, but do not worry too much about burning your tongue: If prepared well, they are so good that they will hop into your mouth by themselves – their name “saltimbocca” literally translates to “hopinyourmouth”.

Citizens, my version is of the classic American take on this recipe, thus the ‘Continental-style’ name. It comes in a sauce of reduced sweet Madeira wine, demiglace, and stock and includes fontina cheese – it is my favorite way to enjoy this recipe. 🙂 I base my version off a classic from Chef Michael Symon.