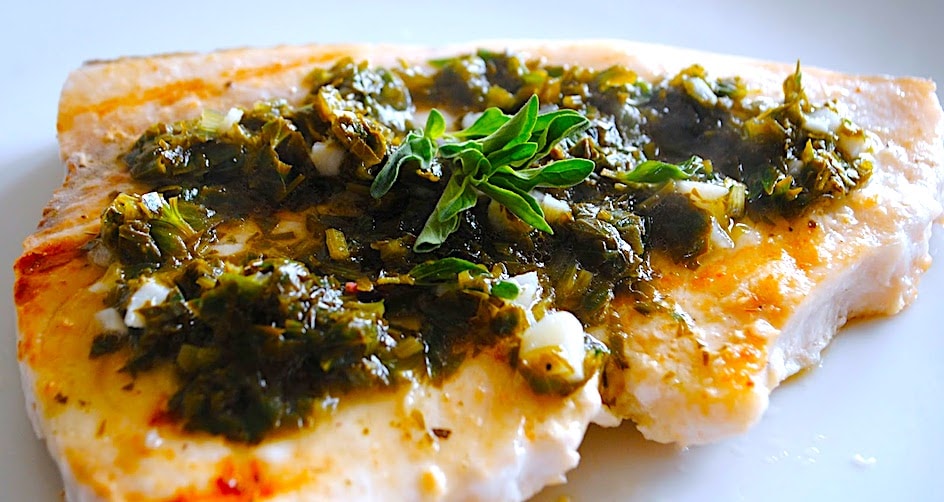 Citizens, we are winding down the week of world sauces with a sauce that looks suspiciously like Italian Ligurian pesto – but it is instead a staple sauce of Southern Italy and Sicily!

As noted on the erudite blog philosokitchen.com (posted here with some grammar fixes):

Salmoriglio is an ancient, Italian marinade and dressing. Thanks to its sour, lemony flavor it helps to tenderize fish, meats, and vegetables giving them a delicious taste! Here is the history and the recipe.

Like many Italian recipes, the origin of this marinade is so ancient as to be uncertain. In different ages, Grecians and Spaniards conquered a large part of Sicily and Calabria, the areas where Salmoriglio is traditional. Their cultures have made a big influence into the cuisines of these regions.

As proof of their mutual impact, Spain, Greece and Italian cuisines share several recipes. For instance, the Grecian ‘Lemonolado’ is a dressing for meats and fish composed of lemon juice, olive oil, and fresh oregano; it has most of the same ingredients as the Italian dressing.

Furthermore, the Southern Spanish ‘Salmorejo’ is a recipe that brings Salmoriglio closer to the Iberian Peninsula. This appetizer is more a soup than a dressing, composed of tomatoes, bread, eggs and Iberian prosciutto. But, the common origin of both names can be seen (Salamoia in Italian, Salmuera in Spanish).

Salmoriglio is named Salmurigghiu in Sicilan dialect, and Salamarigghiu in Calabria. In both regions, the main ingredients are lemon juice, olive oil, warm water, garlic, and oregano. In Calabria, fresh parsley is added in case of fish marination, whereas in Sicily parsley is not traditional.

Some Salmoriglio variations are typical in Sicily. The first one originates in the Eolie Islands and provides for replacing the lemon juice with the same amount of white wine. Another Sicilian variation prefers fresh tomatoes pulp in substitution of the water. Concerning the herbs, in several recipes, fresh mint is added in substitution or in addition to, oregano.

IS SALMORIGLIO A MARINADE OR A DRESSING?

Marinade or dressing? The answer is easy: both of them! Traditionally there is not a different amount of ingredients between Salmoriglio as a marinade or a dressing. Personally, I prefer to use the traditional recipe to marinate and reduce or eliminate the water in case of dressing.

My version of this recipe combines both Calabrian and Sicilian versions to include both parsley AND mint, as well as the necessary oregano. Citizens, this is fantastic on a swordfish fillet (or any dense white fish), as well as chicken. The sauce is simplicity itself and I hope you enjoy it!