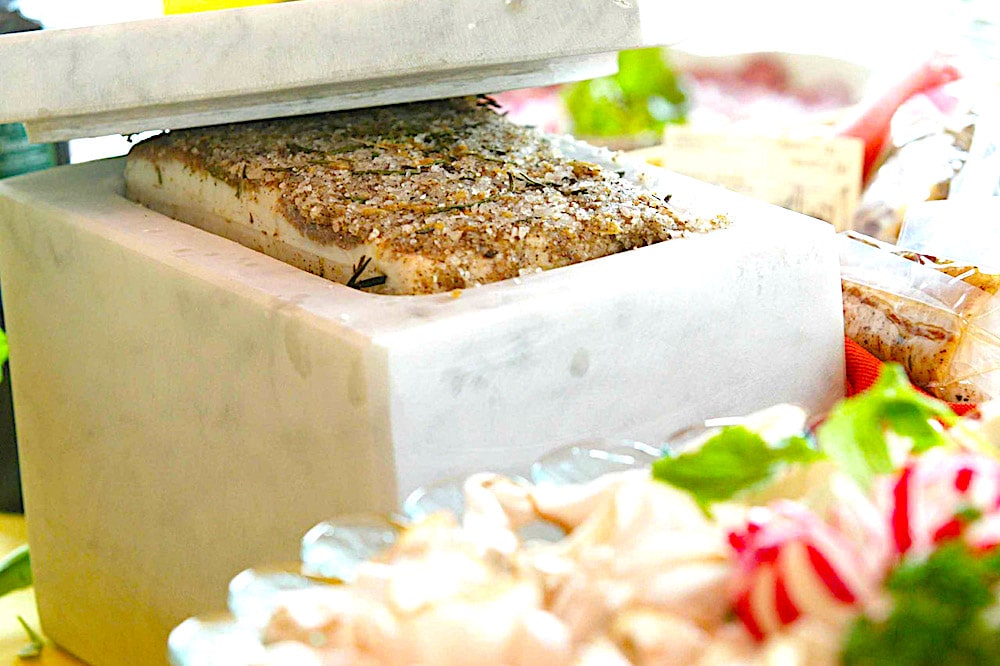 My Citizens, I have very fond memories of driving up a long, winding road laden with white marble dust in the Apuan Alps until I arrived in the ancient village of Colonnata – while there, I purchased some of the village’s famed Lardo, made from aged fatback cured with salt, herbs and spices. Then, I bought some wine, bread and fruit and went over to an abandoned marble quarry to eat an amazing lunch of all of these as my legs dangled over the edge of the quarry lip.

It was pure magic, for many reasons – and to this day, it ranks as one of the most memorable meals of my life.

So why all the mystique and mystery over Lardo – allow the Sagacious One to expound on this!

Lardo di Colonnata PGI is a charcuterie product obtained from the fat of selected pork topside, which is salted and cured in marble bowls.

Processing is seasonal and takes place between September and May. According to the traditional method, curing takes place in bowls carved out of marble blocks originating from the Canaloni marble basin in Colonnata (Massa Carrara).

Each bowl is rubbed inside with garlic and then filled with alternate layers of lard and a mixture of natural sea salt, black ground pepper, fresh rosemary and freshly peeled and chopped garlic; other spices may also be added. The recipients are then closed with a slab of marble or another suitable material, and the ingredients are left to rest for at least six months, in slightly aerated rooms in which humidity depends only on natural factors. During this stage, the consistency of the so-called “pickling brine”, the liquid released from the lard after contact with salt, must be checked.

Lardo di Colonnata PGI generally has a rectangular shape with a thickness of at least 3 cm. The lower part is covered by pig rind, while the upper part is covered with salt, herbs and spices. There can be a streak of lean meat inside and its consistency is uniform and tender. It is white and slightly pinkish or brown in colour. It is fragrant and has a delicate and fresh flavour, enriched with the aromatic herbs and spices that cover it.

The production area of Lardo di Colonnata PGI is within the entire territory of the district of Colonnata in the Municipality of Carrara, in the Province of Massa Carrara, in the Tuscany region. The pigs used for production must be born and reared in the following regions: Tuscany, Veneto, Emilia-Romagna, Friuli Venezia Giulia, Lombardy, Piedmont, Molise, Umbria, Marche and Lazio.

Lardo di Colonnata PGI should be kept in a cellar or cool place; it can also be kept in the fridge. After cutting, it is advisable to fold the strip of the leftover pigskin onto the body of the lard and to leave the product covered with its salt; it should then be wrapped in a slightly dampened cloth. Ideally, Lardo di Colonnata PGI should be served “au naturel” and thinly sliced, with slightly toasted bread or with unusual combinations, such as shellfish. It is perfect to pair with well-structured wines such as Vernaccia di San Gimignano PDO.

The product is marketed as Lardo di Colonnata PGI. It is sold in pieces – vacuum-packed in either plastic or other suitable material – sliced or minced and suitably packaged.

The production area of Lardo di Colonnata PGI is characterised by a high percentage of humidity, mild summer temperatures and limited daily and yearly temperature ranges, which together generate an exclusive micro-climate that is particularly suitable for the processing and natural conservation of the product.

Lardo di Colonnata is made using two great Tuscan products: the white marble from the Apuan Alps, and pork, the main type of livestock in the region. Marble caves have existed in Tuscany since the Roman Age. The marble found in the caves is of excellent quality and is used to make beautiful columns. In making Lardo, a marble box called a “Conca” is used.

While the Romans focused their energy on increasing the amount of marble extracted, the Barbarians that ruled the land after the Romans preferred to raise pigs for pork products, including lard. The best lardo is undoubtedly produced in Colonnata, a small city is located in the Apuan Alps.

The constant mountain wind in Colonnata makes the ideal microclimate for aging lard. The fat is placed in marble tubs, or basins, with the perfect porousness. The Health Department questions the use of marble to no avail. The production of Lardo di Colonnata is regulated by IGP standards, which include aging the meat in marble. As soon as you leave the small, regulated area of production you will find that the quality of the lard declines.

Lardo is one of those foods born of poverty. Its preparation dates back at least 1,000 years! The Italian word “Lardo” is not to be confused with the English word “lard”. Lard (English) is rendered pork fat, which in Italian is called “struto”.

So to make this delicacy of delicacies as it was meant to be experienced, you’re going to need two unique items. First, the proper kind of fat – and the only one I would EVER use in the States is fatback from the wooly Mangalitsa pig, which is renowned for the quality of its meat and fat alike! You can buy it here. If you’re lucky enough to find a Gloucestershire Old Spot heirloom pig, its fat can also be used

Second, you MUST use a marble container to store and cure the fat – only marble from the region has the correct porosity and temperature regulation for this multi-month process. Thankfully, you can buy one here.

This is not a difficult recipe to make, Citizens – but it does require PATIENCE. It will be 7 months before you can eat this, but it is SO WORTH THE WAIT! 🙂 My recipe includes a few instructions and tips from legendary sausage guru Len Poli, and I am grateful for his expertise and sharing of techniques!

Add
117shares
TFD uses cookies and we comply with GDPR so you control your personal info! If you continue on, we will assume you are happy with this, Citizen! OkNoRead more