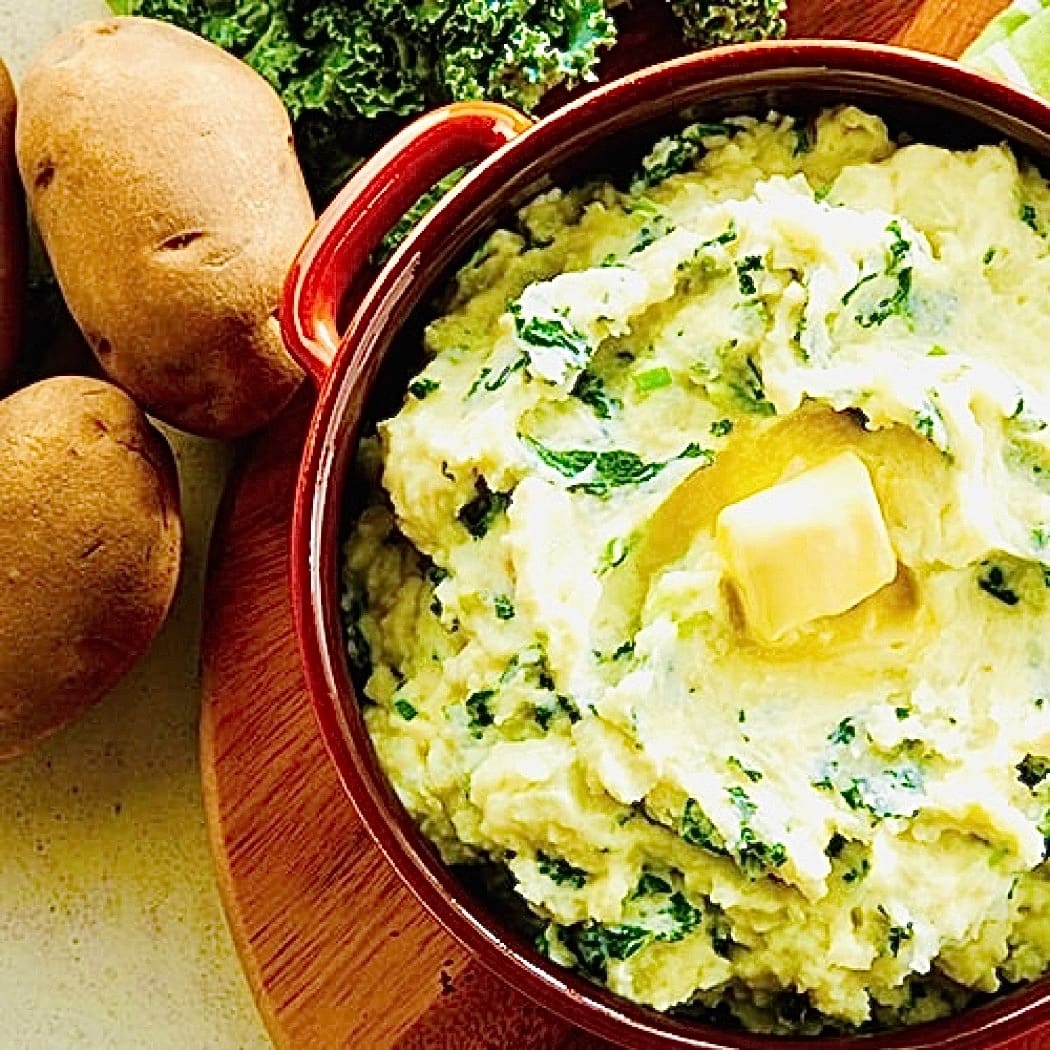 Citizens – a hearty and heartfelt Lá Fhéile Pádraig sona duit to you all – Happy St. Patrick’s Day! While the legendary parade is rightly canceled this year due to COVID-19, the gustatory spirit of the Emerald Isle can still be easily enjoyed at home with that most simple yet profound of Irish dishes – colcannon! As promised in my previous post, this shall be the first recipe of several designed to not only be easy to make with pantry-staple ingredients, it is easy to make for those of us sheltering in place for COVID-19.

Colcannon (Irish: cál ceannann, meaning “white-headed cabbage”) is a traditional Irish dish of mashed potatoes with kale or cabbage. Colcannon is most commonly made with only four ingredients: potatoes, butter, milk and kale.

Irish historian Patrick Weston Joyce defined it as “potatoes mashed with butter and milk, with chopped up cabbage and pot herbs”. It can contain other ingredients such as scallions (spring onions), leeks, Laverbread, onions and chives. Some recipes substitute cabbage for kale.

There are many regional variations of this staple dish. It was a cheap, year-round food. It is often eaten with boiled ham or Irish bacon. As a side dish it goes well with corned beef and cabbage.

During the 1600 and 1700’s in Europe and Ireland, potatoes, cabbages, and leeks were considered the food of the common man so it was inevitable that a dish would evolve that combines all the ingredients. The word colcannon is from the Gaelic term “cal ceannann” which means white-headed cabbage. It is also believed to be a derivative of the old Irish “cainnenin” translated as garlic, onion, or leek.

In Ireland, colcannon is served as a special treat with ham or Irish bacon. The Irish tradition is to serve colcannon as the main dish for Halloween festivities and refer to the evening as “Colcannon Night”. Colcannon is used for the foretelling of marriages. Just as Americans have the fun superstition of the single young lady who catches the wedding bouquet will be the next to marry. Young single Irish women hope to find the ring hidden in their plate of colcannon. A blindfolded, unmarried woman is to pick the head of cabbage or kale from the garden that is to be cooked in the colcannon dish.

Charms such as rings, thimbles, and coins are wrapped and hidden in bowls of colcannon. This is a particularly exciting eve for the young men or women. If a young unmarried girl is lucky enough to find a ring in her bowl, a marriage proposal could be soon waiting for her and she would likely marry within the year before the next Colcannon Night. Other young maidens would fill their stockings with their first and last spoonfuls of colcannon and hang them from the front door handle. It is believed that the first man through the door would become their future husband.

Irish immigrants that came to the United States, introduced colcannon to American cuisine and you will find it served in America more commonly on Saint Patrick’s Day. One of the favorite ways to enjoy a plate of colcannon is to make a large mountain shaped pile on your plate, then make a big well or hole in the center of the pile. A generous pat of butter is placed in the hole which quickly melts. Then cream is poured around the outside of the colcannon pile. One is to take a spoonful of colcannon and dip it into the well of melted butter and experience a bite of heaven.

1735 – Earliest reference to mashed potatoes and cabbages is found in the Diary of William Bulkely, of Bryndda, near Amlwch in Anglesey, who made two journeys to Dublin in 1735.

I happen to prefer the version of colcannon made with kale, but Savoy cabbage is also very traditional. I do suggest a bit of bacon fat mixed with the butter to give a hint of smokiness, as well as the highly eccentric (but delicious) addition of a single clove of roasted garlic. Omit it for the traditional version. I also add in another eccentric touch – a hint of keffir for tang and essential probiotics useful in a pandemic to keep your digestion healthy. Again, omit for the classic recipe.

Citizens, this is a very easy and very traditional dish I hope you enjoy not only as part of your St. Patrick’s Day, but regularly! It’s the best mashed potato and greens you’ll ever have! Enjoy this with a traditional Irish stew and celebrate the holiday in true Irish style!