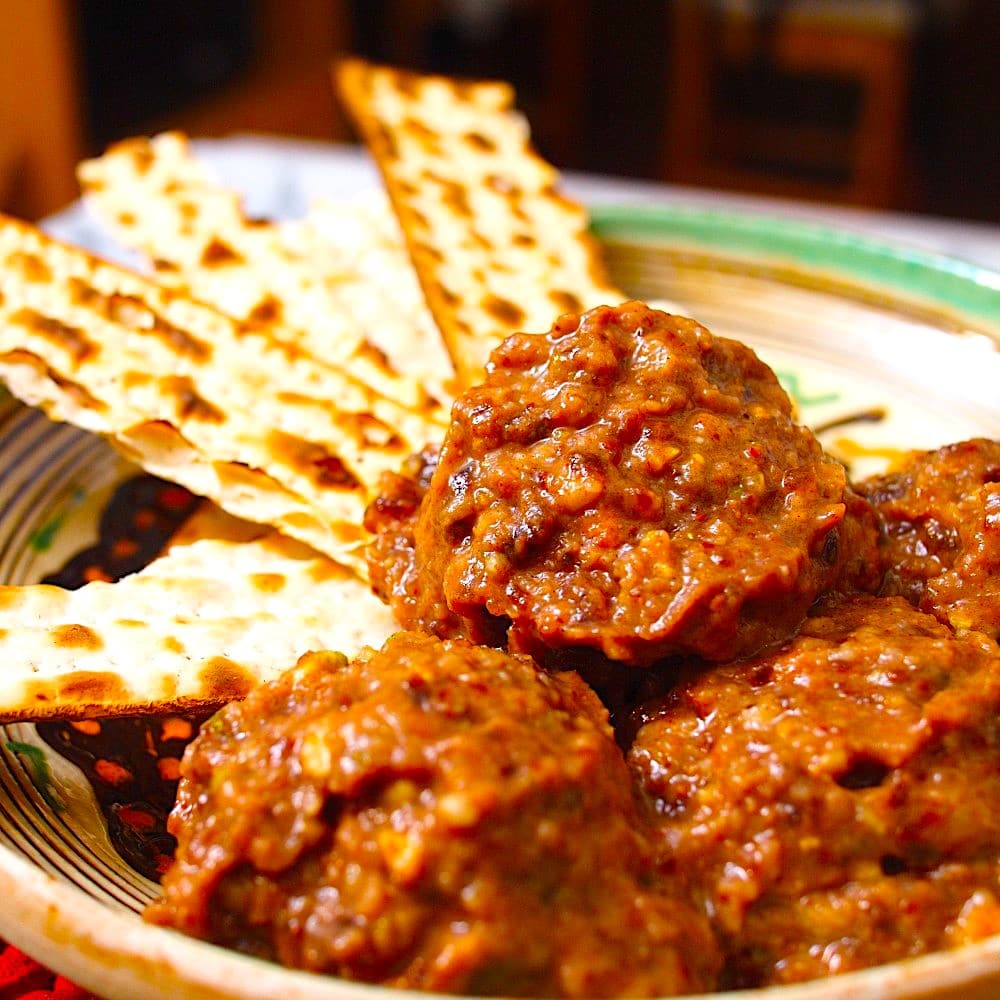 Citizens! Tonight is the first night of the Jewish festival of Passover (Pesach), which to many Jews is the most joyous holiday of the year, celebrating how our ancestors left the land of Egypt after centuries of enslavement.

This year, the Munificent One is – like all Jews – experiencing a Passover seder (which means ‘order’ in Hebrew, but usually refers to the meal and rituals around it) like no other thanks to the modern-day plague of COVID-19. For the first time in recorded memory, we are not going to be celebrating with family and friends except via videoconference (which the Rabbis have granted a one-time exemption for, since one shouldn’t be using electronics of any form during the Seder).

To assuage my disappointment (we usually have 25-30 people over for our Seder, and as you can imagine it’s a HUGE affair), I wish to share with you a rare recipe for the Persian charoset known as hallaq, a fruit and nut mixture with unique middle eastern spices that is an integral part of the Seder meal!

Charoset is a sweet paste made of fruits and nuts eaten at the Passover Seder. Its color and texture are meant to recall mortar (or mud used to make adobe bricks) which the Israelites used when they were enslaved in Ancient Egypt as mentioned in Tractate Pesahim (page 116a) of the Talmud. The word “charoset” comes from the Hebrew word cheres — חרס — “clay”.

Charoset is one of the symbolic foods on the Passover Seder Plate. After reciting the blessings, and eating a matzah “Hillel sandwich” combining charoset and maror (bitter herbs), the remainder is often eaten plain, spread on matzah.

Charoset is mentioned in the Mishna in connection with the items placed on the Passover table: “unleavened bread and lettuce and charoset.” Some say it can be traced back to the custom of symposia in ancient Greece, where philosophical discussions were accompanied by drinking large quantities of wine and consuming foods dipped into mixtures of pounded nuts and spices.

This actually makes a lot of sense as the Greek and Roman custom of leaning or reclining to the left while dining was also adopted to remind Seder participants that Jews were now free citizens of the Empire.

Most American Jews are familiar with Ashkenazic charoset, which hails from Eastern Europe and is a fairly simple mix of nuts, apples, sweet wine and cinnamon. However, this Persian variant is ANYTHING but familiar unless your family tree has roots in Iran, which to this day still contains the biggest single population of Jews (about 25,000) in the entire Middle East, outside of Israel!

Many Iranian Jews fled the country for the United States in the late 70’s when the Shah was deposed and formerly secular Iran became a Muslim theocratic state. Despite the Iranian government’s hostility to Israel (a sickening hatred indeed), Jews in Iran are constitutionally protected from harassment, have a permanent representative in the Iranian parliament and are (for the most part) free to practice their religion.

Unlike the one-note spicing in Ashkenazic charoset, hallaq is intricately spiced and includes a wide range of nuts and fruits, making it a truly delicious addition to any Seder table. My version of hallaq incorporates my custom advieh spice blend – advieh being a complex spice blend used in many Iranian recipes. Hallaq is redolent of not just wine, but also pomegranate and orange juices!  I personally prefer this pomegranate juice for the recipe as it is not sweetened and is 100% pure.

Citizens, there is a shroud of solemnity around this Passover, and I hope all of us, Jews and non-Jews alike, can make it through to the other side of this modern-day plague that feels straight out of the Bible without loss of life amongst friends and family.