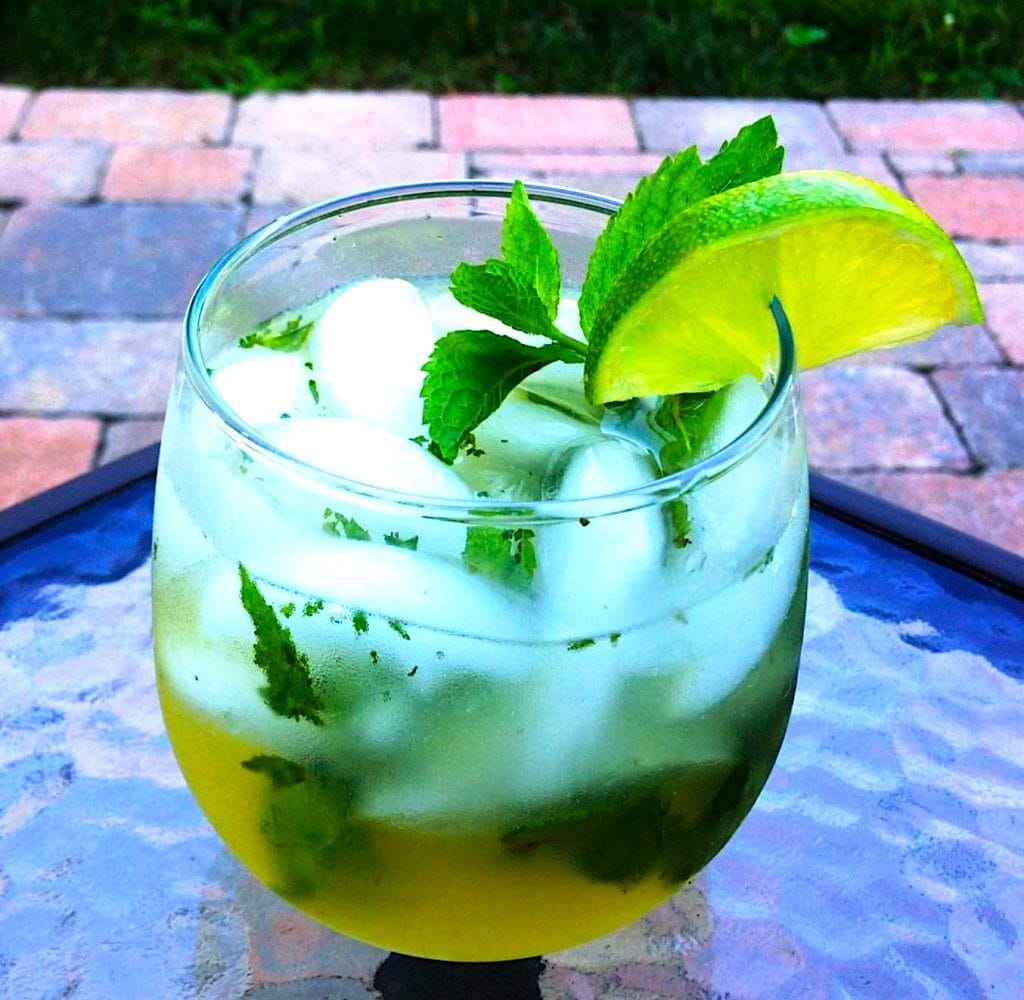 Citizens! As noted in my last post, today has been a day of rest and recuperation from a minor concussion your Beloved Leader – the usually hard-headed TFD! – suffered a few days ago.

While on the mend, I’ve taken the liberty of catching up on a bunch of recipe posts that have been languishing for many weeks – my pain is your gain!

For this post, I give you an ancient recipe from Iran, dating back to the early days of medieval Persia! It may look like an Iranian mojito, and it does incorporate both lime, sugar and mint – but being a Muslim recipe, there is no alcohol in it.

In fact, this Iranian drink is related to the 18th century “Shrub”, which colonial Americans enjoyed in the heat of Summer that combined vinegar, sugar and water to make a most refreshing drink!

Where does the seemingly odd name “Shrub” come from? As your eternal polyglot, follow my lead, Citizens – I will guide you on the one true path!

The term comes from the Arabic word “sharbat” meaning a drink of sugar and water. This in turn came from “shariba” to drink. By the late Middle Ages the Arabic word sharāb (شراب) had come to mean “alcoholic beverage” and the alternate form sharbāt (شربات) and its Persian and Turkish variations, sharbat (شربت), and şerbet respectively, took on the meaning of a sweet non-alcoholic beverage.

In the 12th century, the Persian book of Zakhireye Khwarazmshahi, Gorgani describes different types of Sharbats in Iran, including Ghoore, Anar, Sekanjabin, etc. It is in fact Sekanjabin whose recipe I choose to share today!

Several syrups are listed in the 11th-century Canon of Medicine by Persian writer Ibn Sīnā.

Sekanjabin is one of the oldest Iranian drinks, and is made from honey and vinegar. Sekanjabin is usually served in summer. It is sometimes seasoned with mint. Sekanjabin was first mentioned in the Fihrist of al-Nadim, which was written in the 10th century.

As eruditely expounded at adamastorshire.co.za:

Sekanjabin is a medieval Arabic version of oxymel, which is a general term for medicinal drinks combining vinegar with sugar syrup or honey.

It is probably first mentioned by the ancient Greek medical writer Hippocrates, who prescribes it extensively and comments that, among other things, “it promotes expectoration and freedom of breathing.” (Hippocrates, On Regimen in Acute Diseases, tr. Francis Adams).

The Anglo-Saxons also knew it: an old Anglo-Saxon leechbook mentions oxymel as “a southern acid drink” (Cockayne vol II p. 153), and suggests betony in oxymel as a relief “if a man is tired by a long journey” (p.152). Later the writer gives the recipe for oxymel, together with the injunction to drink it for “the half dead disease” (p. 285), or for epilepsy.

Platina, a 15th-century Italian writer, mentions honey/vinegar oxymel several times, suggesting it as a remedy for the harmful effects of melons (Milham p. 127). Andalusian Sekanjabin likewise has a medicinal slant, since it is described as being “beneficial for fevers of jaundice, and calms jaundice and cuts the thirst” (see recipe below).

Like most Arabic syrups, it was intended to be drunk with hot water as a medicinal draught, although they were probably also drunk cold for refreshment.

The concept of using a basic oxymel infused with herbal flavour of some sort is fairly universal; the Anglo-Saxon leechbook suggests infusing it with radish as well as betony, and Hippocrates speaks of infusing oxymel with asafoetida and carrot, or opoponax and southernwood (whatever those are).

Cariadoc’s mint version doesn’t seem to be much of a leap, particularly given the modern sekanjabins he notes in ethnic restaurants and the parallel Andalusian recipe for mint syrup.

Iranian sekanjabin is an odd duck because the syrup – while designed to be mixed with water and drunk – also makes an excellent salad dressing on its own. In fact, Iranians serve it WITH lettuce on the side to dunk into the drink as a sort of nibble. There is also shredded cucumber in the drink to further help cool the body.

To the Iranian populace and immigrant communities around the world, this is both medicine and thirst quencher and I truly hope you enjoy this taste of Iranian Summer as much as I do, my Citizens!

In my own glorious tradition, I have of course tweaked the classic Iranian recipe to my exacting palatal requirements and added flavor complexity beyond the norm. First, I choose to use a non-standard vinegar – specifically, peach-flavored white Balsamic vinegar. It works perfectly in this recipe – you can buy my preferred brand here. Orange blossom water may be purchased here.