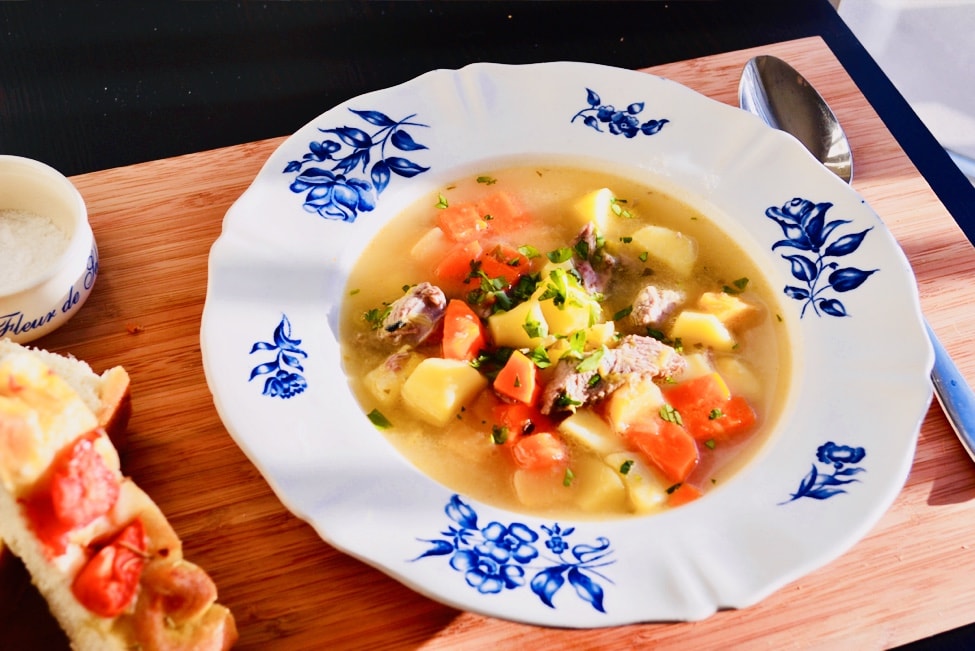 My Citizens, your supreme Leader – the never fungible TFD! – has just returned from a 2-week trip to the Nordic region, including several days in the starkly beautiful country of Iceland!

While there, I was privileged to try this mainstay of Icelandic cooking in the charming Hamlet of Vik on the southern coast of the country where despite being June, it was a chilly 6 degrees Celsius. The lamb used in the soup was literally raised in a field across from the restaurant and it was incredibly delicious! So much so that I am compelled to share it with TFD Nation.

Icelandic meat soup or just ‘meat soup’ is a soup of lamb and vegetables. Most commonly, the soup includes potatoes, carrots and cabbage, but other vegetable types are also used, such as onion and leek, and it is flavored with dried soup herbs. Often, grains are used in the soup to thicken it, such as rice, rolled oats or barley.

Earlier in the centuries, cheeses that were eaten fresh were usually boiled in the soup, which was then pleasantly flavored with lactic acid (a common flavor profile in old Icelandic recipes).

There were no vegetables in the original versions of the soup, but usually some grains, predominately barley and when rice was introduced to the country, it was also used. Imported soup mixtures came to the scene in the late 19th century, and at the same time vegetables were used in the soup, especially potatoes.

Young lamb and goat meat was not the only meat used in soup. Salt meat was often used and sometimes beef and veal, as well as horsemeat . Usually, meat of the forefront or chest is used, sawn into rather large pieces (soup meat).

In the past, this soup was often served on Sunday or as part of a feast and sometimes a Christmas dinner, but now it is a part of everyday life and even a packet soup from Toro, known as Icelandic meat soup.

Similar soups are known elsewhere, especially wherr similar vegetable species are grown and sheep farming is common, such as in Norway and Scotland.

My version hews strongly to tradition, updated only by my enjoyment of bay leaves, which are typically not used in this recipe. Feel free to leave them out. I recommend both Icelandic sea salt and their superlative dried herb mix known as Villikrydd. You can get the salt here and the Villikrydd here. If you so prefer, just use your favorite dried herb mixture in place of the Villikrydd.