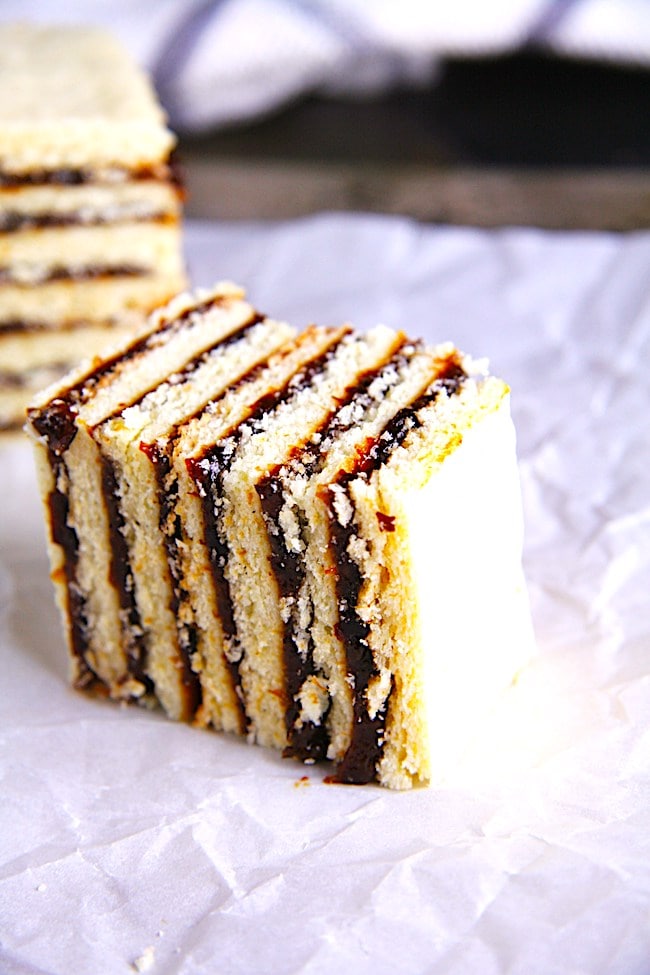 Citizens, your ever-voyaging Tyrant – the always voluble TFD! – is preparing to head out in a few days to the Nordic region, including several days in Iceland where friends and strangers alike know the majesty of my beneficent rule! As such, I wanted to share a very old Icelandic-Canadian recipe with you! (Yes – there is such a thing!)

Vínarterta is a multi-layered cake made from alternating layers of white vanilla- or cardamom-flavoured shortbread and plum jam, the jam usually including spices such as cinnamon, cloves and cardamom.

It originated in Iceland and was brought to Manitoba by Icelandic immigrants to Canada, many of whom settled at New Iceland.

The cake is typically served in rectangular slices with coffee.

The cake’s history was the subject of a dissertation for a doctorate by historian Laurie Bertram at the University of Toronto.

This cake is also known as Randalín (the striped lady). The name Vínarterta means ‘Viennese Torte’, but with the English spelling which leaves out the accent above the i, it becomes ‘Friend’s Cake’.

A variation of this cake is famous among the Western-Icelanders – the descendants of Icelandic immigrants in Canada and the U.S.A. For them, there is hardly anything more Icelandic than Vínarterta.

Now what actually constitutes a vinarterta is an open and sometimes passionate debate. It’s generally accepted that the cake dates back to at least the 1870s, when the first big wave of Icelandic immigration came to Canada.

An estimated 20,000 Icelanders — almost one-fifth of the population — left for North America. When an unusually long deep freeze around that time sent icebergs into the harbours, crippling the vital fishing industry and blocking shipping routes, a wave of immigrants fled to the New World.

The eruption of the volcano Askja compounded the physical and economic isolation, forcing an estimated 25 per cent of the island’s population to seek new lives elsewhere between the 1870s and 1914.

Vinarterta, en vogue at the time, was among the recipes the early Icelandic settlers brought to Canada and other welcoming nations. The 19th-century dish has changed remarkably little since.

Icelandic settlers arrived in what is now Manitoba in the 1870s and established “New Iceland” in what became Gimli.

It was a self-administering “Icelandic reserve” with its own government, directly responsible to the Canadian government in Ottawa.

Today Gimli (named for the home of the Norse Gods) has become known as the cultural heartland for the largest Icelandic population outside of Iceland.

This is an heirloom recipe for most native Icelanders, but is passionately enjoyed every Christmas by the Canadian and American descendants of these North American settlers.

The recipe is dated to the 1860s, a time when prunes were a luxury. Without regular stoves, Icelandic families were happy to cook the layered cake over open hearths.

Citizens, I am sticking with the Canadians when it comes to my version of the recipe. I substitute some almond flour as this was specified in a recipe I found in a Manitoba cookbook from 1929. I also add a bit of brandy to the prune filling, as opposed to boozing up the icing.

I hope you enjoy this heirloom recipe, my Citizens! 😀

Add
317shares
TFD uses cookies and we comply with GDPR so you control your personal info! If you continue on, we will assume you are happy with this, Citizen! OkNoRead more