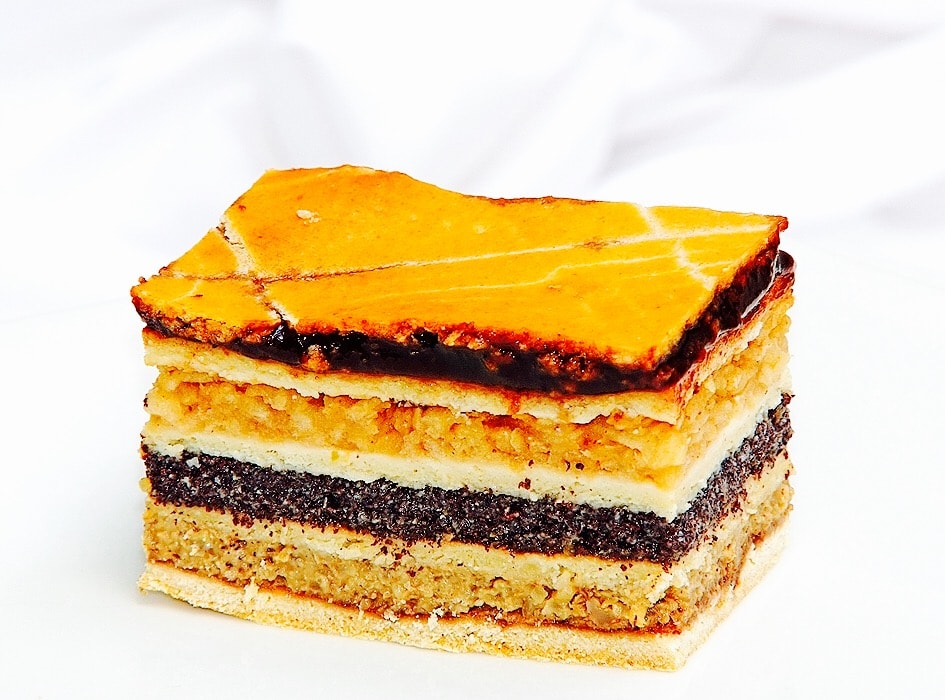 Citizens, Hungary is home to some of the finest desserts on the planet – I never miss the cafes in Budapest when I visit and this is one of my favorite desserts to sample while I’m there!

Flódni is a renowned specialty of the Budapest Jews, a semi-sweet cake whose layers of poppy seed, apple filling, walnut paste and plum jam are separated by thin layers of dough. Flódni could be described as the working-class Jewish response to the aristocratic tortes of Sacher and Dobos.

At one point, almost 1 in 4 residents of Budapest was Jewish – sadly, those numbers are vastly lower today due to the Holocaust.

According to foodandwine.hu, flódni is “the queen of Purim desserts”. Purim is a Jewish celebration – the ‘Jewish Mardis Gras’, as The Independent calls it -, in the centre of which stands a woman called Esther and the fact that the Jewish population managed to survive a Persian king’s attempts to wipe them out about 2500 years ago.

The name ‘flódni’ most probably comes from the German version, ‘Fladen’, though it is important to note that

the German word refers to a broad, flat and thin piece of cookie, unlike the Hungarian word that is attached to a tall piece of cake that has several layers.

Interestingly, the first flódni mentioned describes the dish as having a cheese filling, suggesting that the walnut and plum jam fillings are a new addition and that the flódni that we know today is actually pretty young, 200 years at most. However, by now, it has definitely become a staple food and a popular dessert option for Jewish celebrations.

Flódni has a special place in Hungarian culture, partly because of Ráchel Raj. In 2012, she managed to win the title of ‘World’s Largest Flódni’ with her creation. The attempt at the record-breaking took place at the Sziget Festival, of all places.

For the event at the 20th Sziget Festival, Raj and her team used over 500 kilogrammes of ingredients.

Luckily, it was all worth it, and the team won the title with the dessert that was over 20 meters long.

The team of 8 worked on the challenge for a total of 100 hours. The number of flódni they made, if placed on top of each other, could have reached 96 meters, the height of the Parliament.

This cake isn’t especially difficult to make and is truly delicious – it’s rarely seen today even in Budapest, let alone outside Hungary, so I hope you will try it, Citizens!