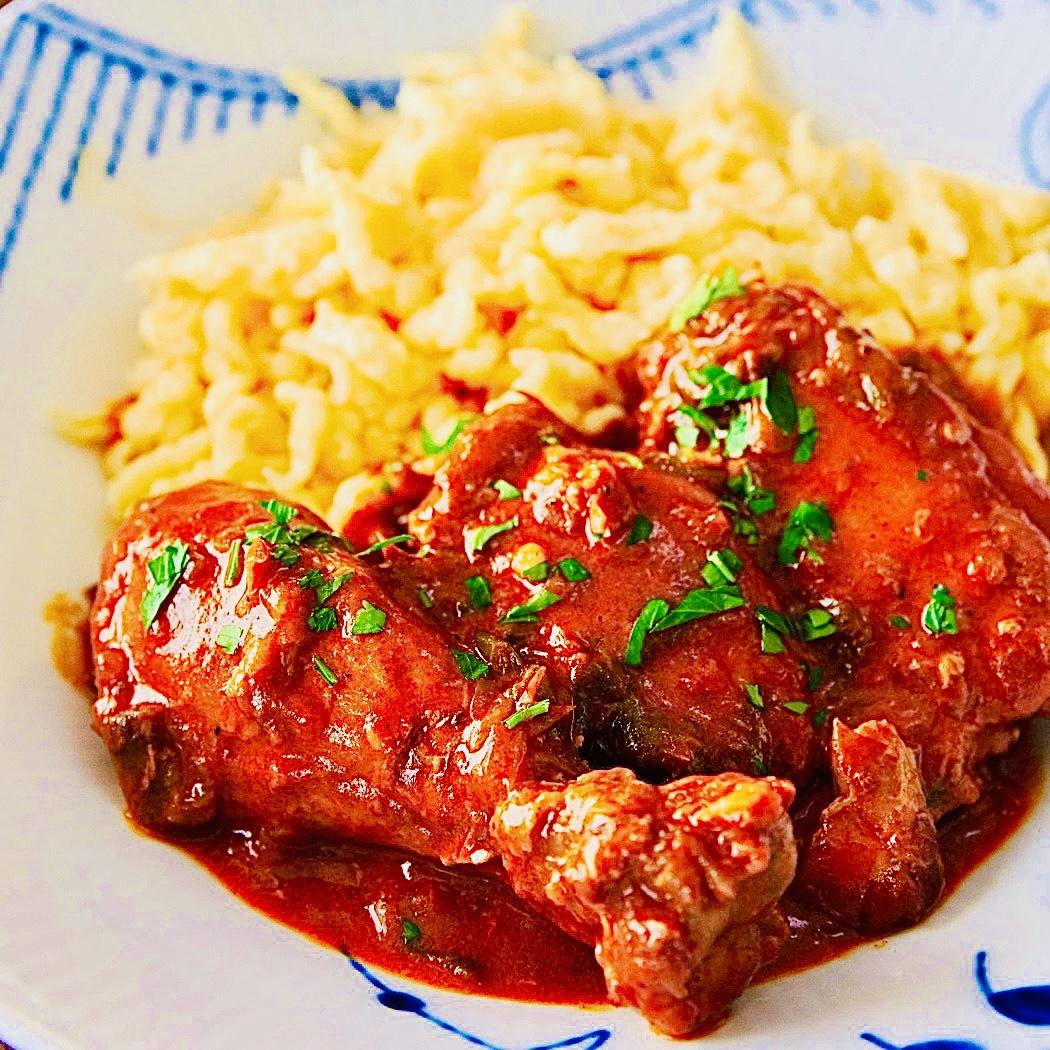 Citizens – as the week closes out and the pandemic rages unabated in my city, state and country as it does through most of the world, the cold, the dark and the fear can close in around you and make everything seem hopeless…

…but Who is this, riding in from the East astride a noble steed, flashing all colors of the rainbow as the darkness is cloven in twain by a drawn sword reminiscent of one taken from the Lake itself?!

BEHOLD the heroism and might wielded solely by your Paladin of the Palatal – YOUR TFD! – as He scatters the noisome terrors of 2020’s darkened Winter with a veritable army of the finest comfort recipes to be found anywhere on the Internet! Not the least of these would be the unmatched inexpensive comfort food of Hungary – chicken paprikash, made with ruthless authenticity and hallowed with unmatched flavors that bring a smile to all of our lips!

Chicken paprikash (Hungarian: paprikás csirke or csirkepaprikás) or paprika chicken is a popular dish of Hungarian origin and one of the most famous variations on the paprikash preparations common to Hungarian tables. The name is derived from the ample use of paprika, a spice commonly used in Hungarian cuisine. The meat is typically simmered for an extended period in a sauce that begins with a paprika-infused roux.

The édes nemes (sweet paprika) is the preferred kind of paprika; it adds a rosy color as well as flavor. Sometimes olive oil and sweet red or yellow peppers and a small amount of tomato paste are used. The dish is traditionally served with “dumpling-like boiled egg noodles” (nokedli), a broad noodle similar to the German spätzle. Other side dishes that it may be served with include tagliatelle (boiled ribbon noodles), rice or millet.

Chicken paprikash is very popular among Ashkenazi Jews (especially those of Hungarian-Jewish descent) – however, to conform to the laws of Kashrut (Kosher), sour cream or any dairy must be omitted, though vegan substitutes could be used. Tomatoes are usually included. Since TFD does not keep kosher and most Hungarians do not either, we will not be following the laws of Kashrut – and in fact we will be using the preferred fat for this recipe – lard!

Specifically, lard from the monarch of Hungarian swine, the mighty Mangalitsa pig – and mercifully the best lard on planet Earth is easily acquired here in the States from this superb purveyor (they also sell amazing Mangalitsa pork!). Now – this is of course a chicken dish, so it is supremely important to use the best-quality heritage chicken you can. Here is a wonderful breed that is eminently suitable for this recipe, and here is the order form for the best cuts to use. You may of course use a locally-raised heritage bird if like me you are blessed to live near many farms raising these types of rare chickens!

For true chicken paprikash authenticity, one should of course use true Hungarian sweet (not hot!) wax peppers – some supermarkets carry them and you can grow from seeds purchased here! Failing the availability of these, you can substitute Italian cubanelle peppers. The Hungarian wax pepper is also known by its Spanish name, chile hungaro, or by the generic Spanish name for yellow peppers, chile guero. It is a pepper that is incredibly popular in Hungary, Croatia, and throughout Central Europe, and the Americas. It is a skinny, long pepper, with thin skin and thick flesh.

The Hungarian wax pepper is a member of the species Capsicum anuum which is the species of plant that produces jalapeños, bell peppers and other spicy and sweet varieties of peppers. The plant is native to the Americas, and the variety of Capsicum anuum that produces the Hungarian wax chile originated in North America. It was introduced to Central Europe in the mid-sixteenth century, and it quickly became a staple in Hungarian and Serbian cuisine. This variety of pepper was well suited to the climate of Central Europe, as it grows well in cool climates.

The Hungarian wax pepper was likely the first pepper to be used in the production of the spice, paprika. Although many other varieties of peppers are used to produce paprika, the spice was first produced in Hungary using the wax pepper. The English word, paprika, even comes from the Hungarian word, paprika, which basically translates as “little pepper.”

This recipe would HARDLY be paprikash if it didn’t include paprika – and a lot of it at that! It is imperative to use fresh paprika, as it only lasts a maximum of 6 months on the shelf before losing, color, flavor and potency. I prefer to use a blend of sweet, smoked and hot paprika in my version of the recipe – and this is the best brand for the freshest of these varieties! I recognize using all of these are pricey – you can always fall back to a far-less expensive but still excellent brand of sweet paprika here.

I prefer to add a touch of white wine to my paprikash recipe – and while not traditional, it is delicious and I call for the fantastic Hungarian white known as Furmint – you can buy it here or substitute an off-dry Riesling – alternatively, omit it and just replace with chicken stock (which I also call for in place of mundane water!). Sour cream is a must in any paprikash dish and I ALWAYS use Daisy brand, as it is the purest and best on the market. For dessert, consider serving this classic of the Hungarian repertoire!

Citizens – I beg you, please stay indoors as much as you can for the Winter, ALWAYS wear a mask when you are outside and remember that we are in the home stretch of beating this thrice-damned pandemic! Only a few months more until the vaccines are broadly available and then we shall TRULY celebrate as One Nation under TFD! 😀