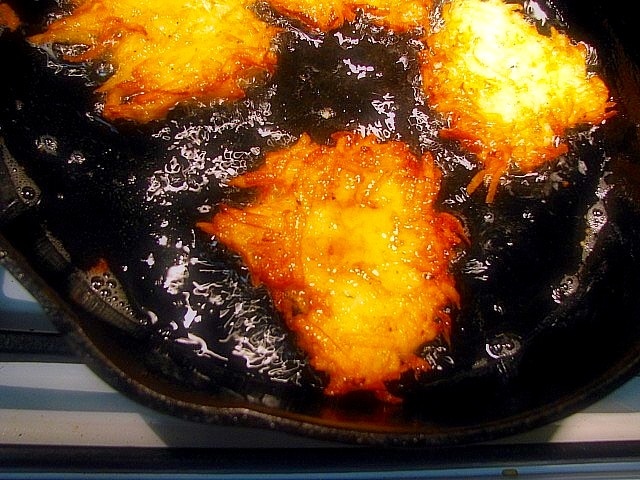 Citizens, the Jewish holiday of Hanukkah begins this weekend, and the holiday is not complete without frying up a few dozen latkes (potato and onion pancakes) in oil!

This eight-day holiday celebrates the “miracle of the oil” commemorating the rededication during the second century B.C. of the Second Temple in Jerusalem. The Jews had risen up against their Greek-Syrian oppressors in the Maccabean Revolt.

Even though there was only enough untainted holy olive oil to keep the menorah’s candles burning for a single day, the flames continued flickering for eight nights, leaving them time to find a fresh supply. This wondrous event inspired the Jewish sages to proclaim a yearly eight-day festival.

The Hanukkah celebration revolves around the kindling of a nine-branched menorah, known in Hebrew as the hanukiah. On each of the holiday’s eight nights, another candle is added to the menorah after sundown; the ninth candle, called the shamash (“helper”), is used to light the others.

In another allusion to the Hanukkah miracle, traditional Hanukkah foods are fried in oil. Potato pancakes (known as latkes) and jam-filled donuts (sufganiyot) are particularly popular in many Jewish households. Other Hanukkah customs include playing with four-sided spinning tops called dreidels and exchanging gifts.

Citizens, there is an art and science to making a true and proper latke, which I will now share with you!

First – you must make sure the potato onion mixture is very dry. Only then will you have properly crisp and not sodden latkes!

Second – save the potato starch from the drained potato liquid. This also keeps the latke crispy.

Third – use a combo of olive oil for flavor, peanut oil to keep the latke from burning and a bit of chicken fat for true savory flavor!

Fifth – cook in a heavy cast iron pan over very high heat! You want these to fry quickly, not to sit and absorb the oil due to improper frying.

Sixth – serve with applesauce mixed with horseradish for a combination of sweet and heat that really complements the latkes!

Citizens, this recipe is spectacular (and never previously shared!) and I hope you will try them, regardless of whether you are Jewish or not! My recipe to make grebenes and chicken fat is also included.