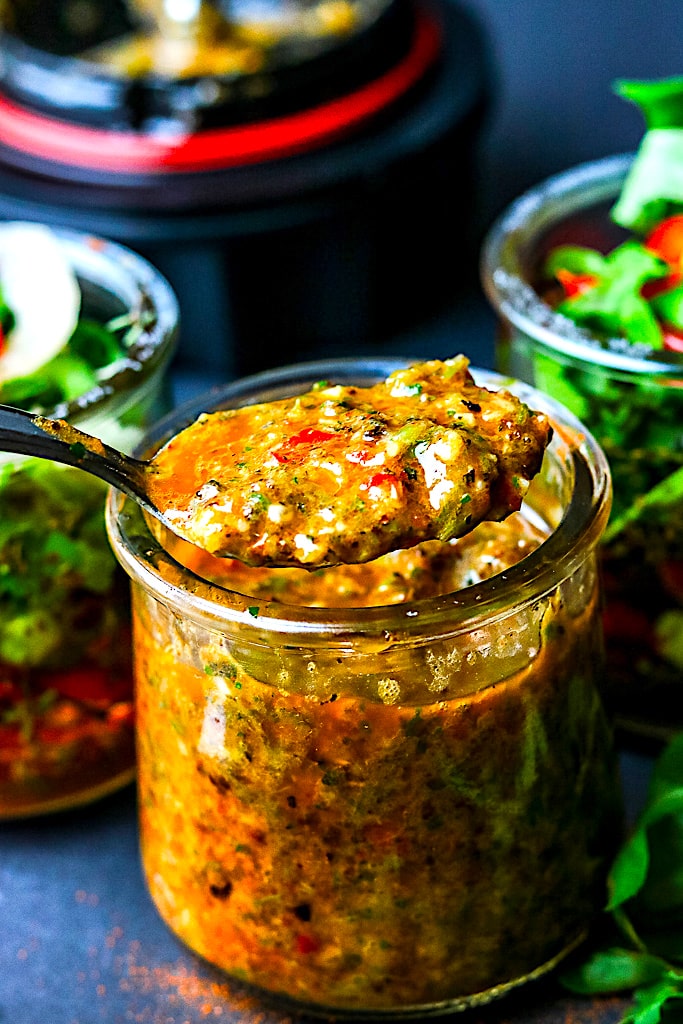 Citizens, the country of Haiti possesses a cuisine that I am hell-bent on seeing more of, as it truly encompasses elements from some of the finest regions of gastronomy – including France. The primary flavor base for Haitian chefs is called epis – a corruption of the French word ‘épices’ – spices. This is indeed a most flavorful base for cooking, being redolent of herbs, spices and a few imported condiments such as Maggi seasoning.

I happen to love Maggi, but it’s true it is very salty – to combat this, I did some research and came across a genius suggestion from savorythoughts.com where the author suggested using a vegetable stock base instead. I have heartily adopted this in my version of the recipe – you can buy it here.

This exceptional flavor diversity is in large part a sad relic of colonialism by several nations, but it has given a legacy of truly supreme, diverse and flavorful culinaria that should be FAR better known outside of the region. I am especially fond of Haitian pork griot, by the way.

Foodbycountry.com has this to say on the cuisine of the nation:

Spain, France, the continent of Africa, and later the United States, were crucial in shaping traditional Haitian cuisine. Throughout its history, several foreign countries gained control of Haiti, introducing food and ideas from their native lands, many of which significantly affected the foods modern Haitians eat.

The island of Hispaniola, which encompasses both Haiti and the Dominican Republic, was inhabited by hunter-gatherers as early as 5000 B.C. Fruits and vegetables such as guavas, pineapples, cassava, papayas, sweet potatoes, and corn were cultivated by early Haitian tribes, particularly the Arawak and Taino Indians.

It was not long before the first European arrived on the island and began introducing oranges, limes, mangoes, rice, and sugarcane. Slaves from Africa were eventually transported to Haiti to work the sugarcane plantations.

On December 6, 1492, Christopher Columbus landed on the island and named it La Isla Espanola (later named Hispaniola), or the Spanish Island, and claimed it for Spain. The Spaniards called it Santo Domingo. The Spanish established sugar plantations and made the native Indians work as slaves. Hard labor and disease nearly wiped out the indigenous population by 1520, forcing the Spaniards to ship slaves from Africa to work the plantations instead.

By 1700, the French had taken control of Hispaniola from Spain. The French colonists successfully cultivated sugarcane, coffee, cotton, and cocoa with the help of African slaves.

Haitians won their independence and became the first African-American republic in the New World in 1804. French rule, however, remains evident in modern Haitian society, particularly in the wide use of the French language, and in the contributions to the country’s cuisine. French cheeses, desserts, and breads are commonly found at local markets and stores.

Being invited to a Haitian home for a meal is a formal affair, even amongst the most humble households – as noted by diningforwomen.org:

A dinner invitation is a very formal circumstance, whether it comes from someone of low social class or elite class. Dress-casual up to formal dress would be appropriate. Even if your host lives in a hut he expects you to behave properly and any misconduct is seen as an insult.

Knives and forks are used the European way (the knife remains in the right hand and the fork remains in the left throughout the meal). When the meal is finished, the knife and fork are laid parallel to each other across the right side of the plate.

Start eating only after the host says, “Bon appetit!” The most common toast is salud (to your health).

You are not expected to bring anything but it is polite to ask.

There are as many versions of epis as there are households in Haiti – there is no single canonical version of the recipe. I’ve read several flame wars between people arguing if cilantro belongs in epis or not, for example. It doesn’t, IMHO, ! I do especially like my version, but feel free to experiment if you’re so inclined – you can add this to almost any dish, of any cuisine when it needs uplifting.

Stir epis into scrambled eggs, mix it with mayo, use it as a marinade or just eat it straight – no matter what you do, epis is a most flavorful condiment that BELONGS in your repertoire, Citizens!