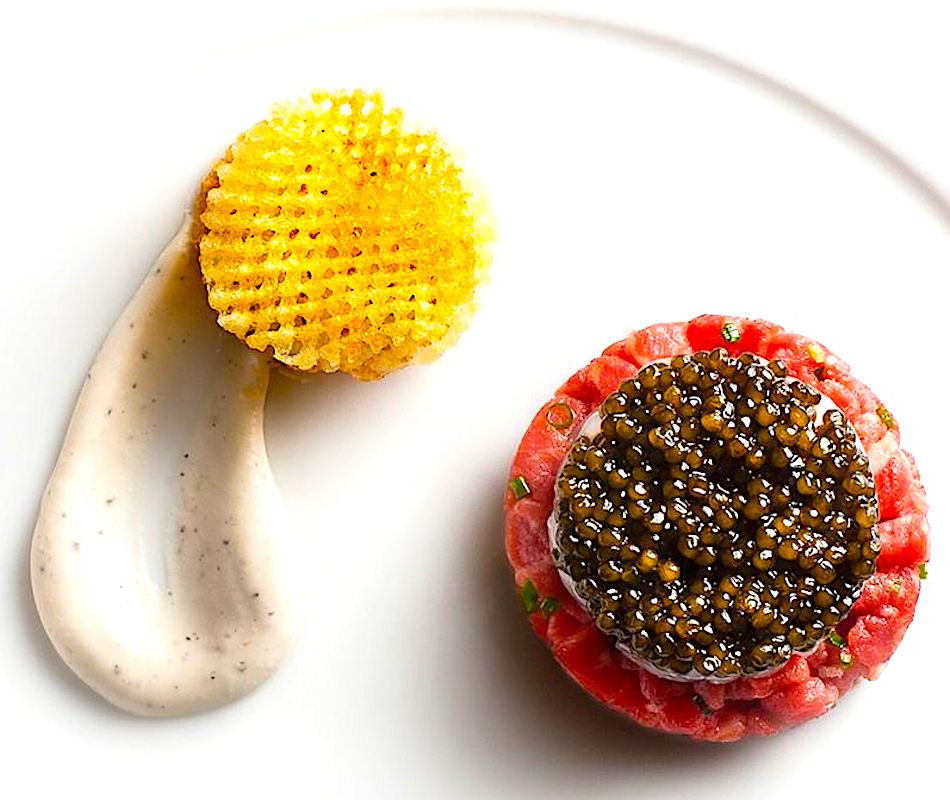 Citizens! Today it is a great pleasure to share with you one of my all-time favorite recipes, bar none! This is a semi-ironic opening since – at least by strict definition – what I am sharing is merely an assemblage, as there is no heat-based cooking at all in the mighty steak tartare!

Yes, this is indeed raw beef – but oh, the symphony of flavors that come with it!!! I have posted versions of other raw beef dishes, such as Ethiopian Kitfo, but this is the one most people are familiar with in Europe and America.

The last recipe I posted was for Taiwanese turkey rice – which while delicious, it is in fact very humble and inexpensive street food. This bad boy is the other extreme – extremely posh, decadent and ruinously expensive to most people’s wallet.

There are many supremely flavorful ingredients in here – and it is the height of luxury to use not only prime beef (a necessity given that the meat is the star here!) but also caviar, truffles and cognac to give you and your guests the true taste of the so-called “Gilded Age” from the late 19th century!

Back then, if you could afford it, only the most legendary and fabulous ingredients were used – and as it happens, steak tartare is believed to originate from that fabled time!

Steak tartare is a meat dish made from raw minced meat (beef or horsemeat) – as it happens, the best steak tartare I have ever eaten was in Norway and was made from horse! Fear not, we are sticking with beef in this recipe.

It is usually served with onions, capers, pepper and Worcestershire sauce, and other well-flavored seasonings, often presented to the diner separately, to be added to taste. It is often served with a raw egg yolk, and often on rye bread.

The idea of eating minced and/or raw meat was popularized in Slavic regions, associated with Mongol encroachment. They and their turkic allies the Tatars were known collectively as being from Tartary, which was essentially Mongolia, though the name was a conflation of Tatar with the Greek stories of Tartarus. They had a tradition of finely mincing very tough meats like horse and camel, to make them edible, then binding the meat with milk or eggs.

Europeans told apocryphal stories of this being made by placing the meat under a saddle to ride upon it until tender. It is possible that this story was confusion originating in the use of thin slices of meat to protect saddle sores from further rubbing on the horse. Either way, minced and/or raw beef became associated with Tartary, and minced raw meat was introduced to Moscow by the Golden Horde.

Russian ships brought recipes for raw meat to the port of Hamburg during the 17th century, a time when there was such a great presence of Russian residents there that it was nicknamed “the Russian port.”

Trade within the Hanseatic League between the 13th and 17th centuries made this port one of the largest in Europe, its commercial importance being further heightened as it became vital to early transatlantic voyages during the age of steam. In the period of European colonization of the Americas, immigrants to this port were a “bridge” between old European recipes and the future development of raw minced beef in the United States.

In the late 19th century, the Hamburg steak became popular on the menus of many restaurants in the port of New York. This kind of fillet was beef minced by hand, lightly salted and often smoked, and usually served raw in a dish along with onions and bread crumbs.

Hamburg steak was gaining popularity because of its ease of preparation and decreasing cost. This is evident from its detailed description in some of the most popular cookbooks of the day. Documents show that this preparation style was used by 1887 in some U.S. restaurants and was also used for feeding patients in hospitals; the Hamburg steak was served raw or lightly cooked and was accompanied by a raw egg.

It is not known when the first restaurant recipe for steak tartare appeared. While not providing a clear name, it’s possible that the dish was popularized in Paris by restauranteurs who misunderstood Jules Verne’s description of “Koulbat” (“…a patty of crushed meat and eggs…”) in his 1875 novel Michael Strogoff.

“Steack à la tartare” (literally meaning “served with tartar sauce”) was later shorted to “steak tartare”. Over time, the distinction between steack à l’Americaine and its tartar-sauce variant disappeared. The 1938 edition of Larousse Gastronomique describes steak tartare as raw ground beef served with a raw egg yolk, without any mention of tartar sauce.

“”À la tartare” or simply “tartare” can still mean “served with tartar sauce” for some dishes, mostly fried fish. At the same time, the name “tartare” is also sometimes applied to other dishes of raw meats or fish, such as tuna tartare, introduced in 1975 by the restaurant Le Duc in Paris.

Health concerns have reduced the popularity of this meat dish in some parts of the world because of the danger of contamination by bacteria and parasites such as Toxoplasma gondii and Taenia saginata.

Since you are serving this raw and with raw egg yolk mixed in, it is imperative you do everything possible to minimze bacterial and parasitic contamination. First, tell your butcher you are planning to make tartare with the meat. Next, to eliminate any chance of salmonella from the raw eggs, I strongly recommend using quail eggs, which do not carry or transmit salmonella food poisoning. The mayo, however, does use raw chicken eggs, so again, make sure they are clean and fresh!

Never serve this dish to anyone who is sick or immuno-compromised!

Now, with that out of the way – let’s focus on the supreme delights and flavors offered in my recipe alone! 🙂

I recognize this is a very expensive dish to make – so, in an ultra-rare (get it?) departure from my usual Dictatorial position – I encourage you to eliminate the caviar and truffle from the dish if your means don’t allow for them. It will still be delicious, of course! Do NOT, however, cheap out on the meat. This is USDA Prime fillet mignon ONLY, unless you go with the American Wagyu alternative I use – you can buy that here.

For caviar, I use Sevruga, the least expensive Sturgeon variety – but you can easily go with a far-less expensive variant from Paddlefish that is only $24 an ounce – Sevruga caviar can be bought here and paddlefish roe from here.

Jarred black truffles from the Perigord in France are the top-quality and available from here, if you choose to use it – and I hope you do! The flavorful ketchup used in the mayo may be bought here – do NOT substitute any other brand of ketchup, please.

My recipe does indeed hearken back to the Gilded Age – it is guaranteed to wow you and your guests alike, whether you go all out or just use a portion of my recommended ingredients!