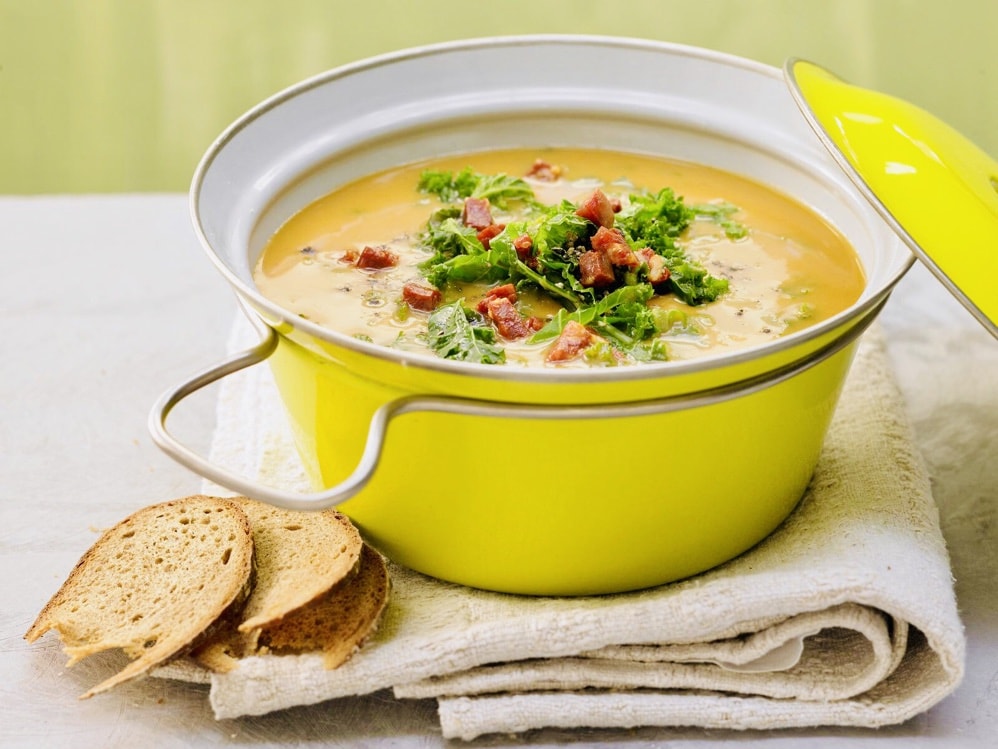 Citizens, few things hit the spot better than a delicious potato soup – and the Germanic version is perhaps my favorite of all of them!

Potato soup is a soup of traditional German and Austrian cuisine. Its main ingredient – unsurprisingly – is potatoes, and if the consistency is relatively viscous it is called a stew.

There are a number of different recipes and the preparation is very different from region to region. The potatoes are cooked, possibly together with other vegetables such as carrots, celery and onions, in salted water or in broth.

In this case, the vegetables used are mainly seasonal. After the cooking process, the potatoes are pureed or mashed with a potato masher. Depending on the recipe, fried bacon cubes or fried onions and fresh parsley are added to the soup. As spices different are herbs and paprika and pepper used.

In some versions of potato soup, other additions include sausage, Vienna sausage, meatballs, black pudding, smoked sausage or other meat or meat preparations.

The version is ruthlessly authentic and is served at Chez TFD with Tyrolean speck!

Tyrolean Speck is a distinctively juniper-flavored ham originally from Tyrol, a historical region that since 1918 partially lies in Italy. Its origins at the intersection of two culinary worlds is reflected in its synthesis of salt-curing and smoking.

The first historical mention of Tyrolean Speck was in the early 13th century when some of the current production techniques were already in use. Südtiroler Speck (Italian: Speck Alto Adige) is now a protected geographic designation with PGI status.

Like prosciutto and other hams and most German Speck, Tyrolean speck is made from the hind leg of the pig. It is deboned before curing.

A leg of pork is deboned and divided into large sections called “baffe”, and then cured in salt and one of various spice combinations, which may include garlic, bay leaves, juniper berries, nutmeg, and other spices, and then rested for a period of several weeks.

After this, the smoking process begins, Tyrolean Speck is cold-smoked slowly and intermittently for two or three hours a day for a period of roughly a week using woods such as beech at temperatures that never exceed 20°C (68°F). It is then matured for five months.

Citizens, I have every possible confidence you will devour this immediately upon making it! 😀

Do NOT follow this link or you will be banned from the site! Click here to see our Privacy Policies, Citizen!
87shares
wpDiscuz
0
0
Would love your thoughts, please comment.x
()
x
| Reply