Pesto is a sauce originating in Genoa in the Liguria region of northern Italy (pesto alla genovese) and traditionally consists of crushed garlic, basil, and European pine nuts blended with olive oil, Parmigiano-Reggiano (Parmesan cheese), and Fiore Sardo (cheese made from sheep’s milk).

The name is the contracted past participle of the Genoese word pestâ (Italian: pestare), which means to pound, to crush. This is in reference to the original method of preparation, with a marble mortar and wooden pestle. It was probably Renaissance-era Genoese traders who first brought basil to Italy from India.

The ingredients in a traditionally made pesto are ground with a circular motion of the pestle in the mortar. This same Latin root through Old French also gave rise to the English word pestle.

The ancient Romans ate a paste called moretum, which was made by crushing cheese, garlic and herbs together. The first mention of a recipe for pesto as it is known today is from the book “La Cuciniera Genovese” written in 1863 by Giovanni Battista Ratto.

In 1944, The New York Times mentioned an imported canned pesto paste. In 1946, Sunset magazine published a pesto recipe by Angelo Pellegrini. As hard as it is to believe today, Pesto did not become popular in North America until the 1980s and 1990s!

The true Maestro of Pesto is undoubtedly Gian Paolo Zeffirino of the legendary eponymous restaurant in Genoa.

Maestro di Cucina Cavaliere, Gian Paolo’s culinary awards are endless and include the European Gold Medal and an Escoffier Award – considered the highest international gastronomic award. He was also formally appointed Ambassador of Genovese and Italian Cuisine to the world.

Gian Paolo has served countless audiences who are dazzled by his food. 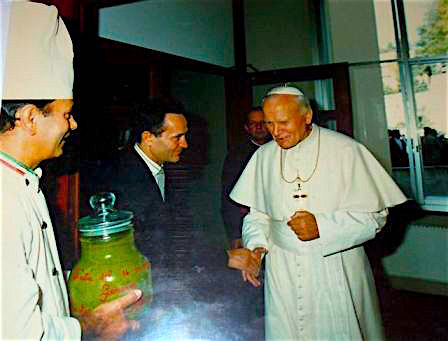 Much ado indeed, about a deceptively “simple” recipe!

Basil is obviously the key ingredient of pesto, and in my opinion there are only 3 types worth using.

Basil a la Genovese is of course what most would consider as the gold standard – but I think 2 other varieties are just as good, if not better! As heretical as it may be, I also love the variety called “Profuma di Genova” as well as the Bolognese Aurelia variety (which is the cultivar I prefer to use). You can buy seeds of all 3 of these varieties to try for yourself for under $3 per packet here.

Of course, the cheeses are also critical to the final product. I uniquely use not just the classic Parmesan and Fiore Sardo but also a touch of Pecorino Pepato as well, which adds a hint of pepperiness that I enjoy. The descriptions of all 3 cheeses as noted at cheese.com:

The Parmigiano Reggiano (or Parmesan cheese as it is called in English) is considered to be among the top cheeses by cheese connoisseurs.

Parmigiano is named after the provinces in which it is made, namely Parma, Reggio Emilia, Modena, Bologna and Mantua.

True Parmesan cheese has a hard, gritty texture and is fruity and nutty in taste. Parmigiano Reggiano cheese is mostly grated over pastas, used in soups and risottos. It is also eaten on its own as a snack.

Fiore Sardo DOP also known as Pecorino Sardo is a raw, hard cheese made from whole sheep’s milk on the Italian island of Sardinia. The cheese is said to have originated during the Bronze Age!

The cheese is made with milk sourced from a single flock of local Sardinian breed. The cheese, after a total aging of six months, has a natural, golden-yellow to dark brown rind.

Upon slicing, the paste reveals a compact, dense, straw yellow or white colour. It is wonderfully rich in flavour, with caramel sweetness, salty tang and a hint of fruit. The spicy flavour of the cheese intensifies depending on the length of maturation

Pecorino Pepato is a raw sheep’s milk cheese dotted with black peppercorn all over the paste. Originally from Sicily, Italy, it is made in Lazio as well other parts of the world.

Pecorino Pepato is aged for about 2 to 4 months during which it develops a flaky yet creamy consistency. The salty, tangy citrusy flavours complemented by the spiciness of the peppercorns make this cheese a great table cheese.

For the pine nuts, do everything you can to try and verify that the pine nuts are from Europe or North America, not China. The species of pine found in China can leave you with a terrible case of “Pine Nut Mouth” which leaves you with a nasty metallic aftertaste for days.

Use the best local garlic you can find and of course a good mellow olive oil. Ligurian olive oil is much less peppery than Tuscan, which would overwhelm the pesto. Try a good Turkish or Israeli olive oil which I find also work well in my recipe.

My use of butter is not heretical, but is in fact used by many Italians to mellow out the flavors of the ingredients and provide ideal texture. Needless to say, use the best butter you can find. For the record and despite what you see at Olive Garden, true pesto NEVER uses cream as a base!!!

Citizens, I am very proud of this recipe, I hope you enjoy it over your favorite pasta! 🙂

TFD currently has a total of 1,356 posts and 1,141,745 words written since December of 2014! Add your voice to My 50,000+ dedicated readers, comment on My recipes and thus become an active member of TFD Nation! Looking for a particular recipe? Search for it in the box above or via the category tags below - there are THOUSANDS of the finest in world and historic recipes here!