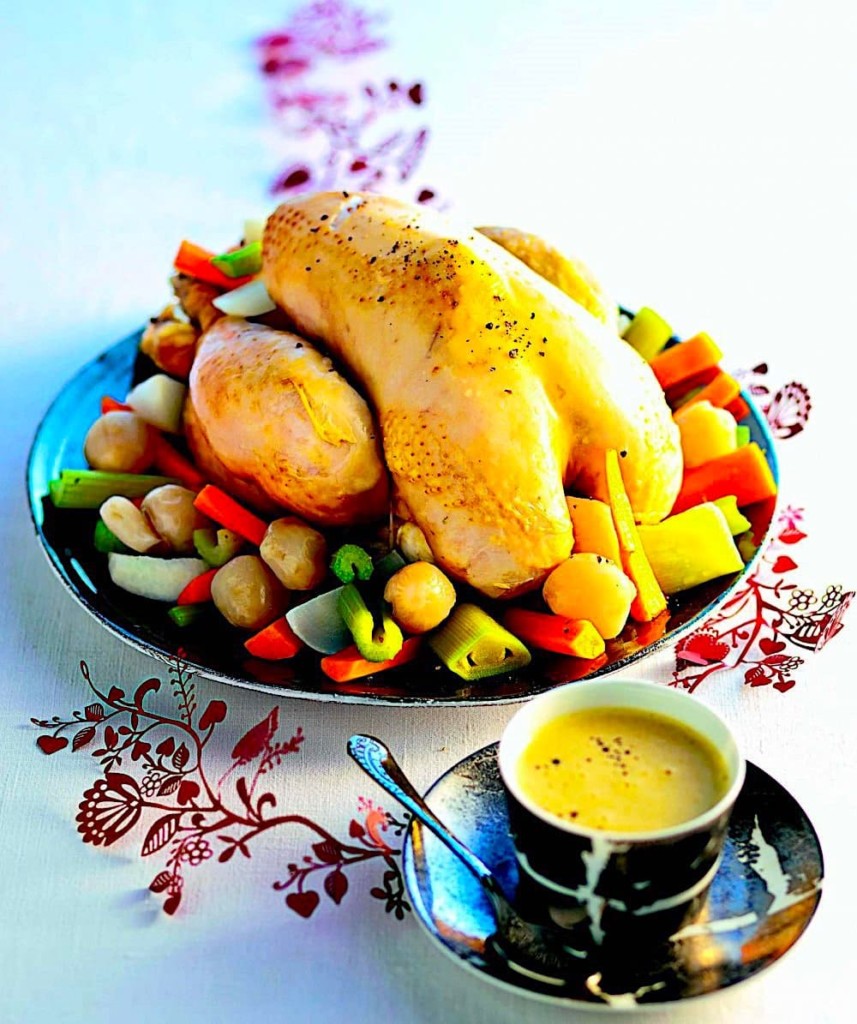 My beloved Citizens! Your equally beloved Leader – the always vigilant TFD! – is currently recuperating from his recent head injury at a superlative hot spring spa in Sonoma, CA!

Peace and ultimate tranquility surround me! A gentle and perfumed breeze wafts over my chaise. The languid waters soothe and heal.

Standard creature comforts are anathema to my revolutionary lifestyle – I prefer the howling ice winds of my Sanctum Sanctorum on the Antarctic peak of Mt. Erebus any day!

Furthermore, spa food here is both healthful, green and oh-so-pretentious – but fails to satisfy my meaty cravings!

As such, today I give you this recipe that is easy on the stomach in the spa tradition, but meaty, !

Poule au pot – at its most simplified level – is boiled chicken, stuffed with something.

In my version, it happens to be stuffed in the old French tradition with a forcemeat of truffles, foie gras, sausage, ham, slab bacon, eggs and aromatic herbs before being gently poached in a rich and equally aromatic stock!

During the presidential campaign of 1928, a circular published by the Republican Party claimed that if Herbert Hoover won there would be “a chicken in every pot and a car in every garage.“ This actually stems from a quote and a royal promise made 300 years before in France!

In 1600, King Henry IV of France (1553-1610) declared, “I want no peasant in my kingdom to be so poor that he cannot have a poule au pot on Sundays.” Poule au pot literally means “chicken in the pot” and the so-called traditional recipe resembles the one of “pot-au-feu”.

However, peasants’ food was mainly based on bread (c. 500 g/day), root vegetables, in-season vegetables and soup. They rarely ate meat except salted pork, hog-grease, bacon, or other meat, whether it was during religious celebrations or when they dared to poach game from their lord’s land.

For people living in towns, it was easier to buy inexpensive pieces of meat, which needed long cooking times.

The method of cooking all food together and for extended periods of time (the whole day sometimes) gave what was called a “pot-pourri” in French and imported into English in the early 17th century.

As expounded on wsj.com:

It was only later that I learned that while I think of the Île Saint-Louis dish as the “chicken in a pot,” that name belongs to a specific recipe associated with Henri IV.

The true dish, called “poule-au-pot,” or hen in a pot, is a luxurious one in which a hen is stuffed with sausage and liver, onions and ham and herbs, and then poached in a rich broth.

I’ve had ritzy versions of it in which the liver has been foie gras and a bunch of black truffles have been slid under the chicken’s skin, and simple versions in which the stuffing was meager and the broth more like my grandmother’s chicken soup.

The versions of poule au pot I found all failed to excite me – so I created a version of the dish worthy of its Kingly heritage! It includes the classic, sharply-flavored sauce of eggs and capers known as Sauce Gribiche that adds so much flavor to the chicken meat!

Basic cooking directions for this recipe came from le-fermier.com – this recipe of Kings and paupers alike is now yours for the taking, Citizens! You can buy foie gras trimmings and black truffle at D’Artagnan and be sure to only use a top-quality, organic and free-range bird – preferably with head and feet.

If your means won’t allow for the foie gras and truffles – simply replace with chicken liver and mushrooms. This is truly a poule au pot for the ages, Citizen, try it with a classic French dessert of  cherry clafoutis!:)