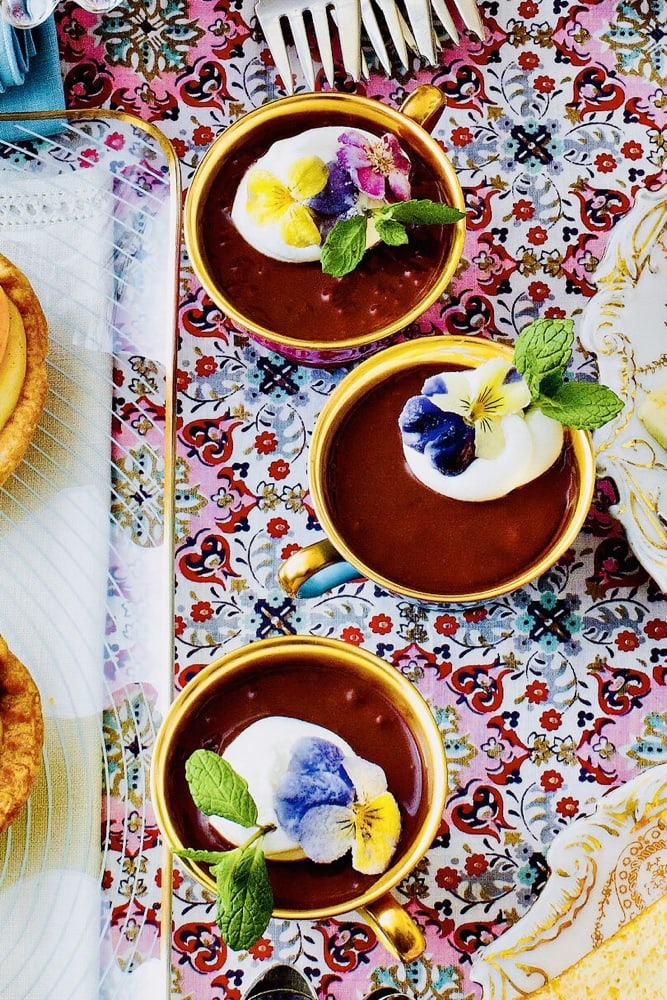 Citizens, your unmatched sovereign – the almighty TFD! – has both a known sweet tooth and an unholy lust for chocolate, making this recipe near the top of my beloved list for best desserts of all time! French chocolate pudding with a whisper of Chambord, the supreme raspberry liqueur of the country and vanilla whipped cream? Fantastic! Add in some edible gold leaf and edible flowers plus some mint leaves? Unmatched!

Pot de crème is a French dessert custard dating to the 17th century. The name means “pot of custard” or “pot of cream”, which also refers to the porcelain cups in which the dessert is served. It is usually looser than other custards, flans, or crème caramel.

Pot de crème is made with eggs, egg yolks, cream, milk, and a flavor, often vanilla or chocolate. The milk and cream are heated and flavored, then mixed into the whisked eggs and egg yolks.

Chambord Liqueur is a 16.5% abv raspberry liqueur modelled after a liqueur produced in the Loire Valley of France during the late 17th century. The Chambord product brand has been owned and produced by the Brown-Forman Corporation since 2006.

The Chambord brand was founded in 1982. The drink was inspired by a raspberry liqueur made in the Loire Valley in the late 1600s, said to have been introduced to Louis XIV during one of his visits to the château de Chambord. It was common during that time for liqueurs and cognac to be consumed with elegant meals.

In 2006, the Chambord product brand was acquired by the Brown-Forman Corporation.

Chambord is produced in the Loire Valley from red and black raspberries, Madagascar vanilla, Moroccan citrus peel, honey and cognac. Whole raspberries and blackberries are steeped in French spirits for a period of several weeks to produce a fruit infusion.

After the infusion is extracted, a second set of spirits is added to the fruit and allowed to rest for a few weeks. After this second infusion is drawn off, the remaining fruit is pressed to obtain the natural sugars and juice.

The fruit-infused spirits and juices from the final pressing are then combined, and finally, the berry infusion is married with a proprietary blend of cognac, natural vanilla extract, black raspberries, citrus peel, honey, and herbs and spices. The liqueur is 16.5% alcohol by volume.

Chambord comes in a spherical bottle. Until mid-2010, the bottle came with a metallic gold plastic lettered ‘belt’ around the middle, and a crown atop its lid. The bottle was modeled after a Globus cruciger.

In the U.S. market, the manufacturer began using a different bottle design in summer 2010, with modifications to the belt, lid and other elements.

I am EXTREMELY picky about my chocolate, and for this, only the best will do with the flavor profile I prefer (which tends to be found in beans from Africa as opposed to South America or elsewhere, at least for me!). My preferred chocolate for this dessert is E. Guittard 63% extra dark, found here. To add an extra hit of dark chocolate flavor, I use a touch of Callebaut 80% baking chocolate, found here. Vanilla bean paste (a necessity!) is here and gold leaf is here.

Despite the luxurious ingredients, this is by no means a difficult or time-consuming recipe – what it will be is the best chocolate pudding you’ll ever be fortunate enough to eat! 🙂