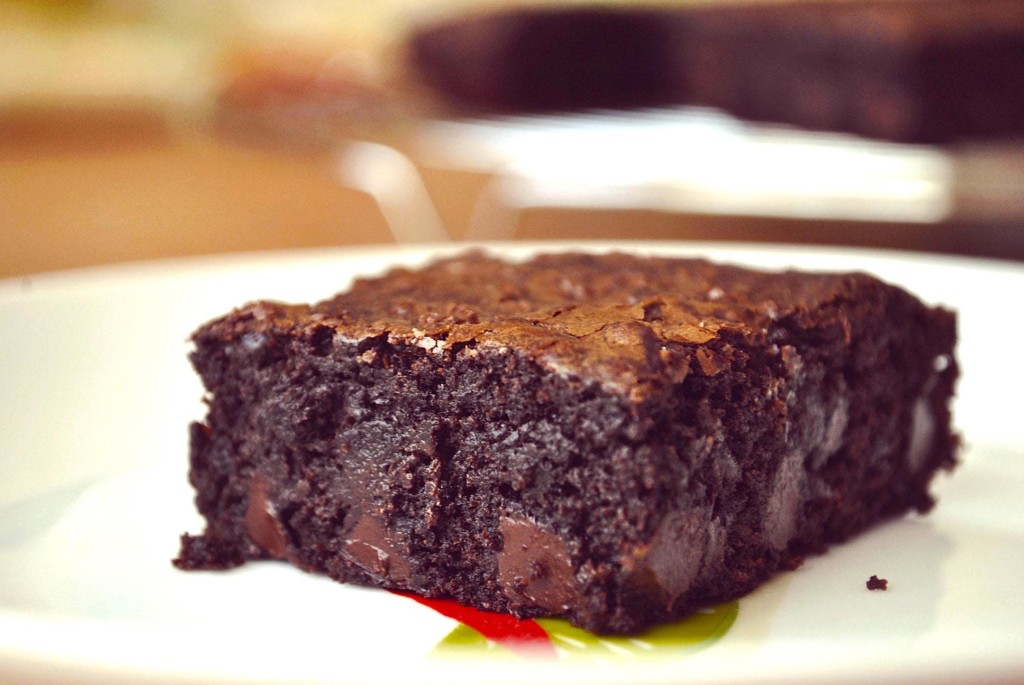 Chocolate brownies – name one person who doesn’t like them and I will tell you their humanity is seriously in question. A perfect brownie is of course a matter of personal taste, but to TFG’s own educated palate my recipe is unmatched! At the request of my friend Nathan, I post it here for your cooking pleasure. The brownie was developed in the United States at the end of the 19th century and popularized in the U.S. and Canada during the first half of the 20th century.

Brownies are a form of sheet cookie. Brownies are typically eaten by hand, often accompanied by milk, served warm with ice cream (a la mode), topped with whipped cream, or sprinkled with powdered sugar and fudge. In North America they are common lunchbox treats,[citation needed] and also popular in restaurants and coffeehouses.

One legend about the creation of brownies is that of Bertha Palmer, a prominent Chicago socialite whose husband owned the Palmer House Hotel. In 1893 Palmer asked a pastry chef for a dessert suitable for ladies attending the Chicago World’s Columbian Exposition. She requested a cake-like confection smaller than a piece of cake that could be included in boxed lunches. The result was the Palmer House Brownie with walnuts and an apricot glaze. The modern Palmer House Hotel serves a dessert to patrons made from the same recipe. The name was given to the dessert sometime after 1893, but was not used by cook books or journals at the time.

The first-known printed use of the word “brownie” to describe a dessert appeared in the 1896 version of the Boston Cooking-School Cook Book by Fannie Farmer, in reference to molasses cakes baked individually in tin molds. The earliest-known published recipes for a modern style chocolate brownie appeared in the Home Cookery (1904, Laconia, NH), Service Club Cook Book (1904, Chicago, IL), The Boston Globe (April 2, 1905 p. 34), and the 1906 edition of Farmer cookbook. These recipes produced a relatively mild and cake-like brownie.

By 1907 the brownie was well established in a recognizable form, appearing in Lowney’s Cook Book by Maria Willet Howard (published by Walter M. Lowney Company, Boston) as an adaptation of the Boston Cooking School recipe for a “Bangor Brownie”. It added an extra egg and an additional square of chocolate, creating a richer, fudgier dessert.

The name “Bangor Brownie” appears to have been derived from the town of Bangor, Maine, which an apocryphal story states was the hometown of a housewife who created the original recipe. Maine food educator and columnist Mildred Brown Schrumpf was the main proponent of the theory that brownies were invented in Bangor. While The Oxford Companion to American Food and Drink (2007) refuted Schrumpf’s premise that “Bangor housewives” had created the brownie, citing the publication of a brownie recipe in a 1905 Fannie Farmer cookbook, in its second edition, The Oxford Encyclopedia of Food and Drink in America (2013) said it had discovered evidence to support Schrumpf’s claim, in the form of several 1904 cookbooks that included a recipe for “Bangor Brownies”.

Citizens,my brownies are a combination of four of my favorite flavors – Frangelico hazelnut liqueur, a touch of vanilla paste (not extract), a whisper of coconut and LOTS of night-dark chocolate! As I loathe the idea of nuts in my brownie, but like the taste, this paradox is resolved by my ingenious use of Frangelico in the recipe.

I believe you will find favor in the flavor of these unique treats – give it a try and prepare your tastebuds for a sweet treat of sophistication!

Do NOT follow this link or you will be banned from the site! Click here to see our Privacy Policies, Citizen!
125shares
wpDiscuz
0
0
Would love your thoughts, please comment.x
()
x
| Reply