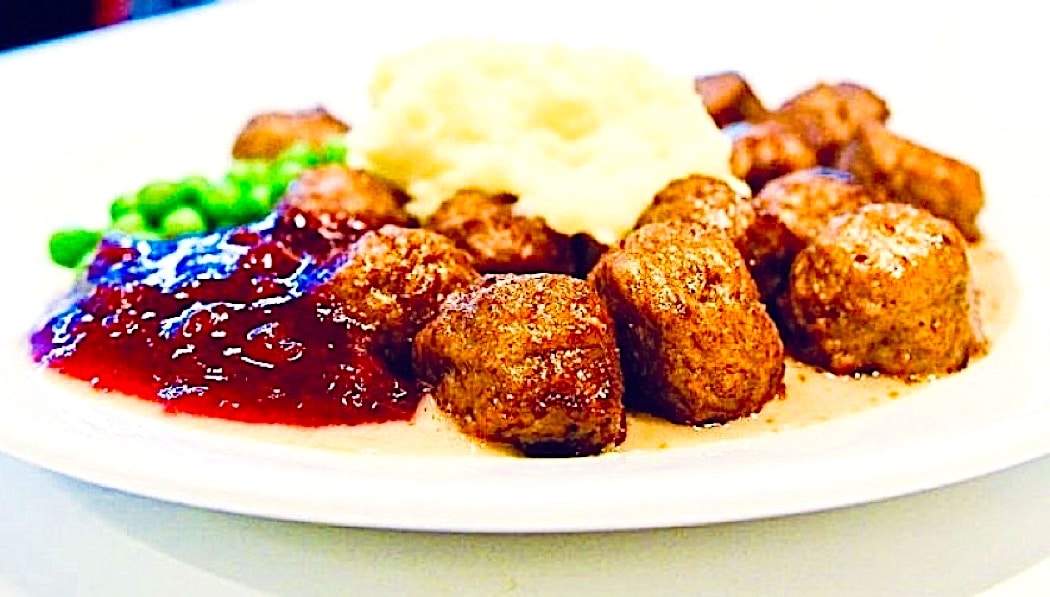 Citizens, it is an indisputable truth that the soul of the Northernmost – YOUR TFD! – is forever ensconced in the haunting, aurora-kissed night skies of the Nordic regions! Finland in particular is a country that draws me: darksome forests, silent people (with a great sense of humor when they choose to show it), respect for nature, education and a strong sense of national pride in their linguistic uniqueness.

Their cuisine ranges from the unusual to the sublime, often hand-in-hand – this recipe for Finnish meatballs (Lihapyöryköitä) is quite familiar to non-Nordic palates thanks to its kissing cousin from the west: Swedish meatballs. Finnish meatballs are just as tasty, served in a similar sauce and are very worthy indeed of your consideration!

Recently, there was a bit of a controversy over Lihapyöryköitä within the country: due to new regulations concerning specific nomenclature and accurate labeling of food, one grocery store decided to legally drop the word ‘meat’ from the name meatballs?!

As noted in a fascinating article from 2015 on foreignpolicy.com:

By the look of it, you’d think major Finnish retailer Kesko’s meatballs had gone vegetarian Monday when the company’s website removed the word “meat” from the product’s label, renaming it as just “balls.” The balls in question still contain about 52 percent animal product. But the company has decided that under Finnish law, that animal product doesn’t really count as meat, because it’s been “mechanically recovered.”

Heta Rautpalo, a product research manager for Kesko’s food division, explained the situation to Finnish broadcaster Yle: “Mechanically recovered meat cannot be described as meat. It’s mechanically separated from the bone after the parts that can be defined as meat have been removed from the carcass with a knife.”

Two years after inspectors found significant amounts of horse-meat in European beef, Kesko insisted that there was nothing suspicious about the move to de-“meat” its balls. Explaining why Kesko uses the not-quite-meat, Rautpalo said that “it’s worthwhile to use those ingredients somehow and they are well-suited for use in these kinds of ground meat products.”

The law forcing Kesko to separate the word “meat” from its balls has already caused several other companies to do the same, according to Yle.

In Finland, Christmas is celebrated from December 24th to 26th with Christmas dinner eaten on the 24th. The traditional Finnish Christmas dinner includes lihapyöryköitä as the centerpiece, along with oven-baked ham, root crop casseroles, liver casserole and pâtés, smoked or raw salmon, herring dishes, and mixed beetroot salad.

My meatballs include not only a bit of grated cheese, but also a uniquely Finnish ingredient – tar syrup! Now, before you start gagging and accusing the Omniscient One of losing his marbles, know that in Finland, tar syrup (Tervasiirappi) is a common flavoring, and is derived from the sap of pine trees. It is sweet, smoky and totally delicious – and extremely difficult to buy unless you live in Finland.

The tar syrup is well suited for hot and cold beverages, sauces, and desserts such as with ice cream. When used for seasoning, it is a mild, slightly sweet taste that only enhances the food and doesn’t overpower it.

Tar has historically been an important part of Finnish culture from its use in seafaring to flavoring food to folk medicine. It was once considered a panacea reputed to heal “even those cut in twain through their midriff”. A Finnish proverb states that “if sauna, vodka and tar won’t help, the disease is fatal.” Wood tar is used in traditional Finnish medicine because of its microbicidal properties.

There are a lot of products made with tar today, such as candies, flavoring alcohol, tar soap and shampoo. It is even commonly used as sauna fragrance which brings to mind a summer cabin with the smoky fragrance of a warming sauna.

You might be able to convince a European-based retailer to ship you some of their tar syrup – if yes, you can buy it here. If not, you can come up with an effective substitute by mixing this pine cone syrup available from Amazon with a bit of melted super-dark chocolate (85%+) and a touch of hickory liquid smoke. The taste is quite close – or just leave it out entirely, as it is an ingredient I added to the base recipe.

You can buy wild lingonberry preserves, a traditional side for Lihapyöryköitä from here. I’ve chosen to replace the standard kosher salt with sea salt smoked with Birch – it adds a true savor to the meatballs, you can buy it here.

If you love Swedish meatballs, you’re going to love Lihapyöryköitä, Citizens – I hope you decide to try them without further delay!