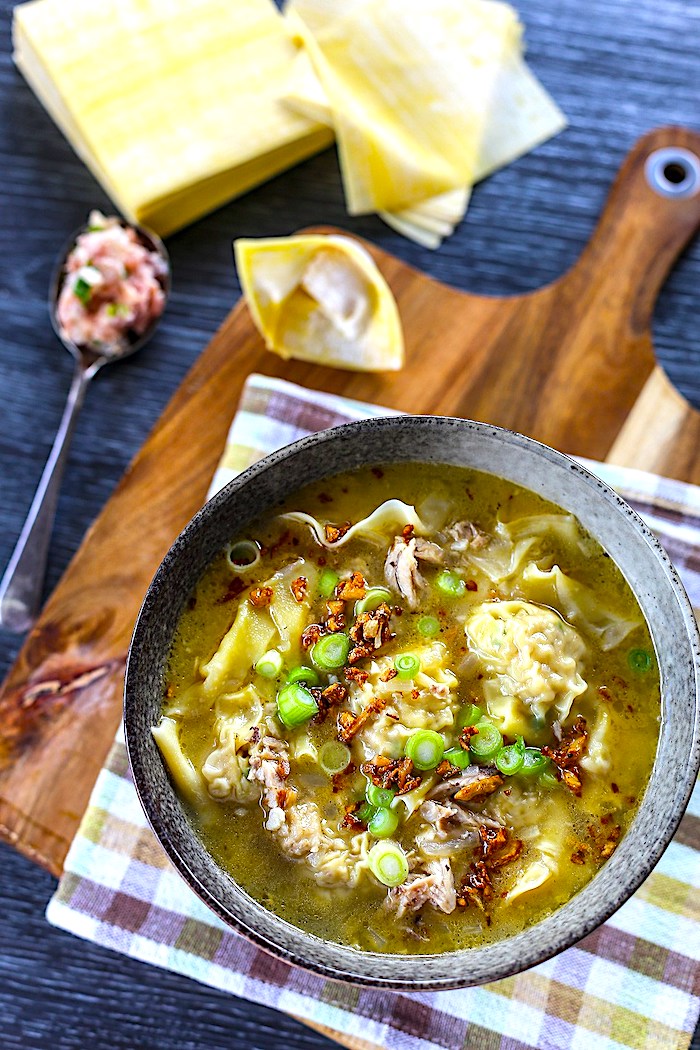 My glorious Citizens – the Suzerain of Soups, YOUR TFD! – has another fantastic recipe for you today, one replete with many of my favorite flavors, textures and ingredients! I speak of nothing less than wonton soup, but not just ANY pedestrian soup of this ilk – no, this is as far removed from your local Chinese takeaway as it is possible to get, because THIS version hails from the Philippines! 😀

Pancit Molo or Filipino pork dumpling soup uses wonton wrappers which originated from Molo district in Iloilo City. It consists of a mixture of ground pork wrapped in molo or wonton wrapper, as well as shredded chicken meat, and also shrimp. The piping-hot soup is often ladled into serving bowls, and garnished with green onions and fried garlic bits for another layer of flavor. This dish resembles the Chinese wonton soup but the wide variety of ingredients and flavor makes this dish noteworthy.

In Filipino cuisine, pancit are noodles and are also in the name of the dishes made from them, usually referring to rice noodles. Noodles were introduced into the Philippines by Chinese immigrants in the archipelago, and over the centuries have been fully adopted into local cuisine, of which there are now numerous variants and types.

The term, pancit (or the standard but less commonly spelled, pansit), is derived from either the Philippine Hokkien Chinese: 扁食; lit. ‘wonton (noodles)’ or Philippine Hokkien Chinese: 便的食; lit. ‘convenient food’. Different kinds of noodles can be found in Filipino supermarkets which can then be cooked at home. Noodle dishes are also standard fare in local restaurants. Food establishments specializing in noodles are often referred to as panciterias.

Nancy Reyes Lumen of the Philippine Center for Investigative Journalism writes that according to food lore handed down from Chinese Filipinos, noodles should be eaten on one’s birthday. They are therefore commonly served at birthday celebrations and Chinese restaurants in the Philippines often have “birthday noodles” listed on their menus. However, she warns that since “noodles represent long life and good health”, they must not be cut, as that would “corrupt the symbolism”.

Pancit is as crucial to each Filipino feast as rice is to every complete Filipino meal. With Santacruzan (among other regional fiestas all over the country) looming over the month of May, stuffing one’s face with numerous variations of the said noodle dish is a delightful certainty. Yet while preparing (and consuming) big cauldrons of pancit is second nature to any true-blue Pinoy, the origins of this iconic party food are not exactly confined to a specific region (or to our country, for that matter).

From a Chinese Merchant’s Baon to a Filipino Favorite

Even foreigners who’ve been to our shores refer to pancit as Filipino noodles, but the word itself is neither Filipino in origin nor did it necessarily bring to mind images of long, thin strands of rice or wheat. The name comes from the Hokkien “pian e sit,” which literally translates to “something conveniently cooked” (i.e., fast food).

It probably arrived in our country as a Chinese trader’s baon meant to tide him over in his homesickness as he plied his wares to the natives. Once his stash ran out, he may have tried to make his own noodles using rice flour as an alternative to wheat. Given how rice noodles are easier to cook than either rice or wheat noodles and are highly versatile vehicles for various toppings and sauces, the clamor for pancit quickly caught on.

During the Spanish occupation, the indigenous noodle dish was essentially the nation’s first “takeout food,” with panciteros (Chinese food hawkers who sold pancit) catering to the cigar factories’ working women who had little time for housework or cooking. The demand for the convenient, ready-to-eat meal soon led to the vendors establishing permanent roadside eateries to service both working and traveling customers, the resulting panciteria’s thus becoming our country’s first covered restaurants.

Nowadays, pancit is a fixture at many significant milestones such as weddings, baptisms, graduations, and most especially during birthdays, where their inherently Chinese symbolism as edible harbingers of a long life (provided you don’t cut the noodles before you eat them) are frequently invoked. It continues to be enjoyed by generations of Filipinos in various forms, with sotanghon, bihon, canton, or miki as the most commonly used and consumed noodle variants.

Pancit also goes by a lot of names, each one indicating either the dish’s color (pancit puti or white pancit), how it is eaten (pancit habhab), where it is sold (pancit istasyon), alleged inventor (pancit Henoy), or its place of origin (pancit Malabon).

In this recipe, there is technically no pancit – except that the won ton wrapper is serving as the ‘pancit’ – thus, it falls into the category by Filipino standards!

Unusually – at least for one of MY recipes – there is nothing actually all that outré about the ingredients, as all of them (for once!) are easily found in your supermarket! I endorse only one brand of sesame oil, and that is the Japanese brand known as Kadoya. You can buy it here. My favorite brand of fish sauce – by far – is this one. This would be a great recipe to enjoy as a first course, perhaps before some delicious Filipino roast pig!

Do NOT follow this link or you will be banned from the site!