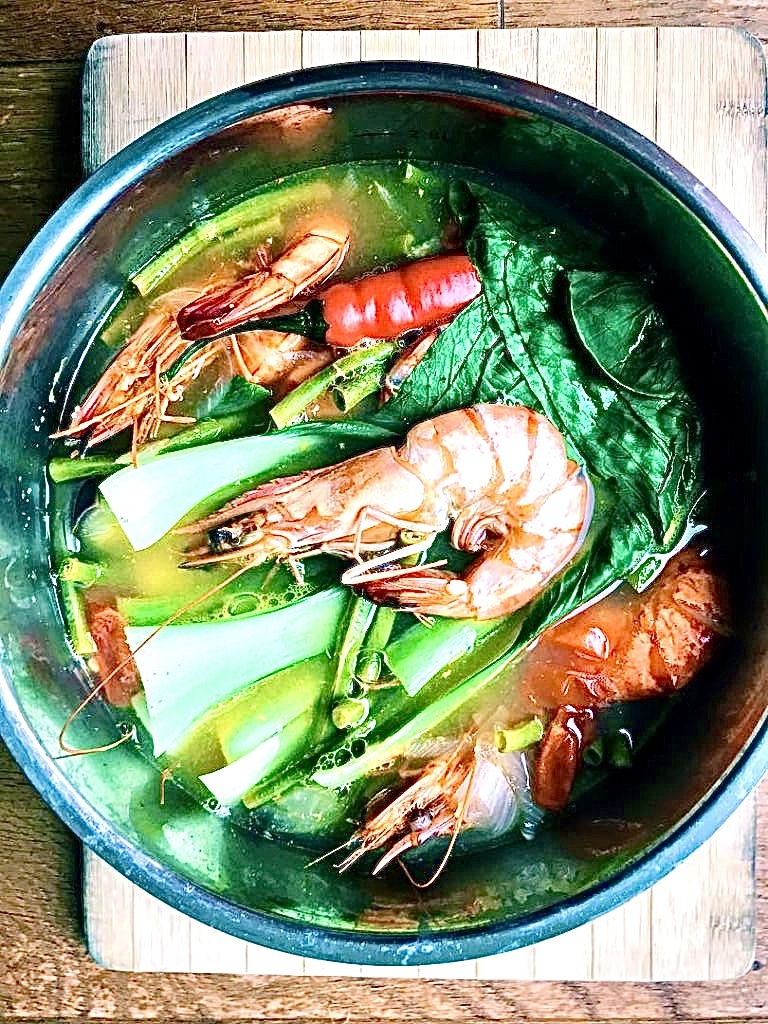 Citizens! Few things delight the razor-sharp palate of the Enlightened One – the Bodhissatva of ‘Bon Appetit’ who bestows His blessings as TFD! – more than a deliciously pure and limpid hot and sour soup in the Thai tradition. Imagine then my delight to discover that the Philippines also has a soup of similar nature, known as Sinigang na Hipon in the native Filipino language!

Sinigang is a Filipino soup or stew characterized by its sour and savoury taste most often associated with tamarind (Filipino: sampalok). It is one of the more popular dishes in Filipino cuisine, one that deserves to be far better known outside its native region.

Sinigang means “stewed [dish]”, it is a nominalized form of the Tagalog verb sigang, “to stew”. While present nationwide, sinigang is seen to be culturally Tagalog in origin, thus the similar sour stews and soups found in the Visayas and Mindanao (like linarang) are regarded as different dishes and differ in the ingredients used. Fish sauce is a common condiment for the stew. The Malaysian dish singgang is derived from sinigang.

Sinigang is most often associated with tamarind in modern times, but it originally referred to any meat or seafood cooked in a sour and acidic broth, similar to but differentiated from paksiw (which uses vinegar).

Other variations of the dish derive their sourness from native ingredients. These souring agents include unripe mangoes, butterfly tree leaves (alibangbang), citruses (including the native calamansi and biasong), santol, bilimbi (kamias or iba), gooseberry tree fruits (karmay), binukaw fruits (also batuan), and libas fruits, among others. Guava, introduced to the Philippines via the Manila galleons is also used. Seasoning powder or bouillon cubes with a tamarind base are commercial alternatives to using natural fruits.

Sinigang typically use meat or seafood (e.g., fish, pork, beef, shrimp, or chicken) stewed with tamarind, tomatoes, garlic, and onions. Other vegetables commonly used in the making of sinigang include okra, taro corms (gabi), white radish (labanós), water spinach (kangkóng), yardlong beans (sitaw) and eggplant (talóng). Most Filipinos like to cook sinigang with green long peppers in order to enhance the taste and add a little spice to the dish. Another variation includes adding locally made miso.

For your general reference:

The style of food making and the food associated with it have evolved over many centuries from their Austronesian origins (shared with Malaysian and Indonesian cuisines) to a mixed cuisine of Indian, Chinese, Spanish and American influences, in line with the major waves of influence that had enriched the cultures of the archipelago, as well as others adapted to indigenous ingredients and the local palate.

Dishes range from the very simple, like a meal of fried salted fish and rice, to fish curry, chicken curry, complex paellas and cozidos of Iberian origin created for fiestas. Popular dishes include:

Various food scholars have noted that Filipino cuisine is multi-faceted and is the most representative in the culinary world for food where “east meets west”.

Citizens, I amp up the spice factor with some fresh horseradish root (found in some variants of the recipe) and ingeniously use some coconut water for sweetness and flavor in addition to the classic “rice-washing water” of the original. Leave it out if you so prefer. You’ll need tamarind concentrate for the primary sour flavor, you can buy it here.

Needless to say, you should only use shrimp with heads-on for the recipe! I’d suggest enjoying this as the first course of a classic Filipino meal, perhaps with pork adobo as the main course!