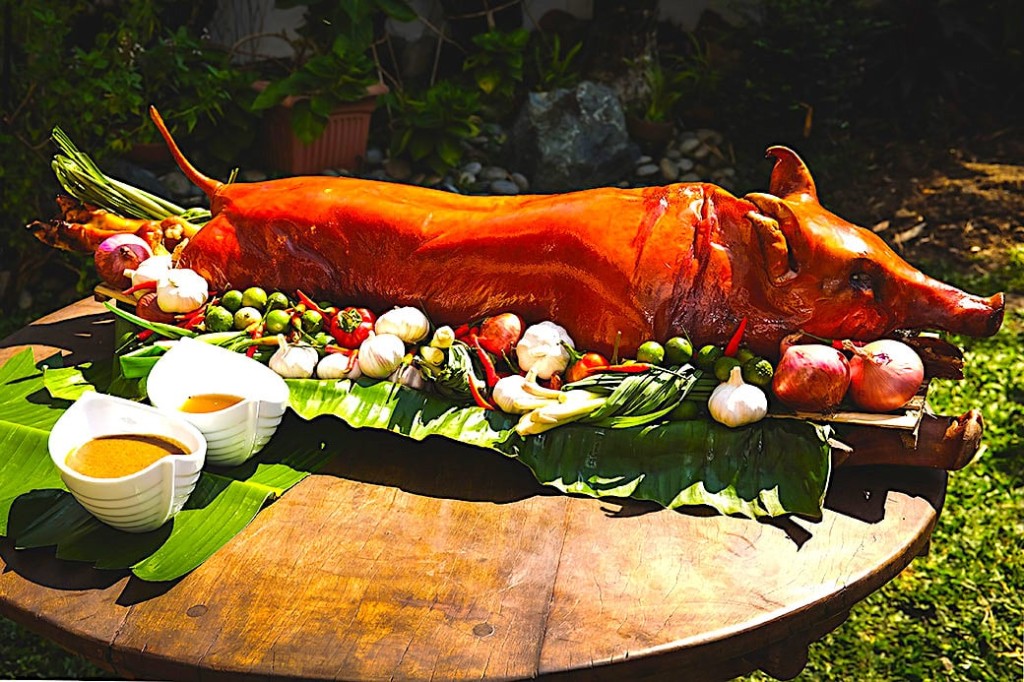 My Citizens, I am very excited to share the first international recipe for the week of “Divine Swine”! Specifically, 7 whole hog dishes in honor of the upcoming Chinese New Year of the Earth Pig! Prepare to launch your tastebuds to DEFCON 1 with this unmatched delicacy straight from the Philippines!

First off, please carefully read my post on how to properly setup and cook a pig roast here.

Ok, with all that out of the way, let’s at last talk about the Filipino roast pig – one of the finest versions of whole hog cooking you’ll ever find and one that is optimized for small pigs (as opposed to the behemoth NC-style hogs used in competitive BBQ)!

Visayan lechon is prepared stuffed with herbs which usually include scallions, bay leaves, black peppercorn, garlic, salt, and distinctively tanglad (lemongrass), among other spices. A variant among Hiligaynon people also stuffs the pig with batuan or binukaw (Garcinia binucao). It is usually cooked over charcoal made from coconut husks. Since it is already flavored with spices, it is served with minimal dipping sauces, like salt and vinegar or silimansi (soy sauce, calamansi, and labuyo chili).

Luzon lechon on the other hand, is typically not stuffed with herbs. When it is, it is usually just salt and pepper. Instead, the distinctiveness of Manila lechon comes from the liver-based sauce, known as the “lechon sauce”. Lechon sauce is made from vinegar, brown sugar, salt, pepper, mashed liver (or liver spread), breadcrumbs, garlic and onion. Manila lechon is also typically cooked over woodfire.

Most lechon can either be cooked based on the two main versions, or mix techniques from both. Both variants also rub salt or spices unto the skin to make it crispier, as well as continually baste the lechon as it cooks. Sometimes carbonated drinks may also be used.

They are cooked on a bamboo spit over charcoal for a few hours with constant (traditionally manual) turning. The pig is roasted on all sides for several hours until done. The process of cooking and basting usually results in making the pork skin crisp and is a distinctive feature of the dish.

Leftover parts from the lechon, such as the head and feet, are usually cooked into another popular dish, lechon paksiw. Like lechon itself, lechon paksiw also differs based on whether it is prepared Luzon-style or Visayas-style, with the former using liver sauce as an essential ingredient, while the latter does not.

Cebu is one of the oldest towns in the Philippines. With a rich historical past, Cebu’s history goes way beyond 439 years ago when the island became a province at the start of the Spanish colonization.

If you’re a History junkie this claim is evident when you visit its heritage sights such as old churches and ancestral houses, tourist attractions like the Magellan’s cross and Lapu-lapu shrine, and the city proper itself.

Cebu celebrates its annual Sinulog Festival with colorful parades and street parties in honor of the miraculous image of the Santo Niño. A not to be missed event in the Philippines every month of January! Pit Senyor!

Cebu is the home of the best lechon makers and purveyors of the Philippines. In every grand occasion, the star and the center piece of Filipino buffets is lechon. The word “lechon” came from the Spanish term that refers to a roasted suckling pig. Lechon is a skewered whole pig roasted over charcoal, a popular dish in the Philippines. The production of lechon is a thriving business in Cebu.

Please do try and use genuine Filipino ingredients in this recipe, including their unique soy sauce! You will be assuredly rewarded with one of the finest whole hog recipes you’ve ever tried! 🙂 (and optional) ingredients if you’re so inclined to follow my lead – either way, my changes are noted in the recipe below.