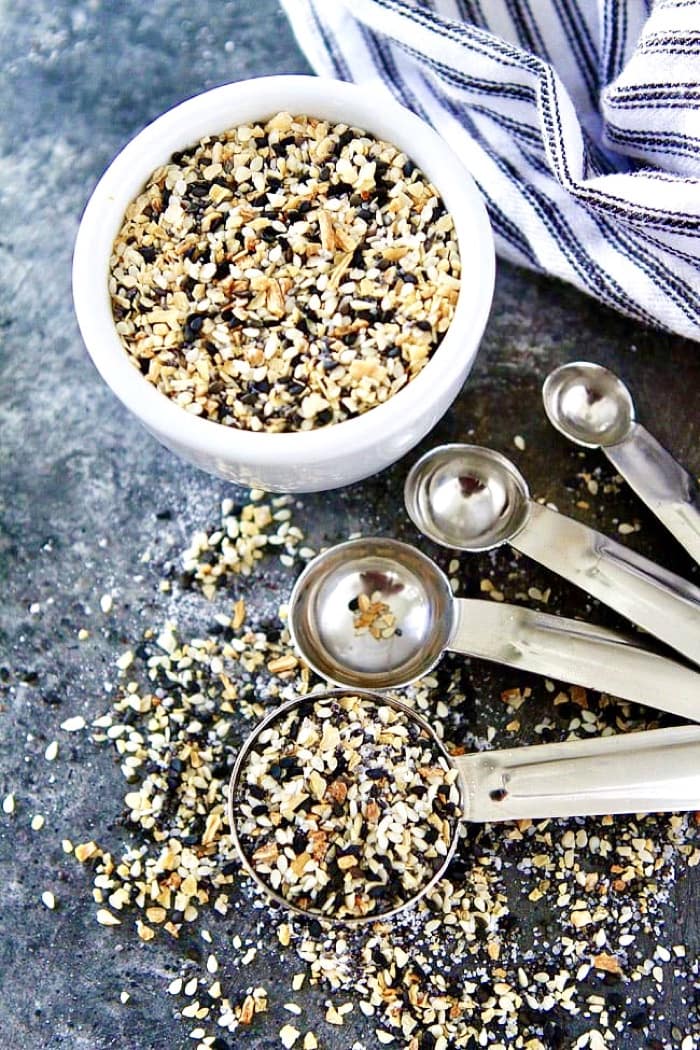 My glorious Citizens! Tremble in anticipation, as the well-seasoned One – the Suzerain of Spice who ALONE is TFD! – shall today deign to share with you the magnificence that is ‘everything bagel’ seasoning! Yes, everyone’s favorite bagel flavor is now available sans bagel for your gustatory and palatal delight – buckle in, because this one is truly special! 🙂

An everything bagel is, of course, a popular type of bagel that was allegedly invented by David Gussin and includes a large variety of toppings; the exact ingredients depends on the individual vendor.

The bagel itself is usually made using a standard recipe; but instead of only one topping, it is topped with a mixture of several bagel toppings used in the bakery. Poppy seeds, sesame seeds, onion flakes, garlic flakes, pretzel salt, and pepper are all popular toppings that most vendors use on their version of this storied bagel.

Although the official origin of the everything bagel is disputed, David Gussin is typically credited for its invention sometime around 1980.

Gussin allegedly developed the idea for the everything bagel one day while sweeping up leftover bagel toppings from the oven. Instead of disposing of the leftover toppings, Gussin claims to have saved them in a bin and convinced the store owner to make bagels with them. Gussin recognizes the possibility that others could have invented the famous bagel topping combination before him, however he is adamant that he was the first to coin the name “everything bagel”.

There are a number of people who have claimed to have invented this, including American restaurateur Joe Bastianich, American entrepreneur Seth Godin, and sports marketer Brandon Steiner.

In his blog, Seth Godin claims that he invented this special bagel in 1977, two years before Gussin, while working at a bagel factory. Though Godin’s alleged everything bagel predates Gussin’s bagel, Brandon Steiner claims to have invented it before anyone else. In 1973 Steiner was hired as a night baker at a local bakery. During one of his night shifts, he claims to have invented the first ever everything bagel.

“One night I was screwing around with different combinations of toppings – sesame, salt, poppy, onion and garlic – making braids, onion flats, and other unorthodox concoctions. Then, after a while, I had the thought to throw all the toppings on a bagel at once. That’s how I invented the everything bagel. This was 1973; I was 14.”

As previously noted, the exact recipe for an everything bagel seasoning is literally different at every bakery or spice house – mine too walks this solitary path, as TFD‘s unmatched expertise in spice blending showcases both my steady hand and imaginative take on the classic.

My first adjustment was to add in one of my favorite spices – ajwain seeds! These impart a delicious herbal note of thyme and are completely optional, though they ARE delicious! You can purchase some from here. Next, I also call for some charnushka, also known as onion seeds or nigella – they are used on many Jewish rye breads and are a lookalike for black sesame seeds, just with a whole lot more flavor! You can buy some here.

As for the minced onion and garlic – be VERY careful here, you do NOT want the commonly-used powdered versions! Thankfully, you can cost-effectively buy a combination pack of the correctly-sized versions of both here. The same goes for the salt – DO NOT use powdered salt, you need a proper flake salt, and Maldon is my go-to choice. This seasoning blend is just as much about texture as it is flavor, so follow my lead on this one, Citizens!

My last innovation is one I am especially proud of – I thought initially of adding some fennel seeds to the mix, but it is an overwhelming flavor in the amount needed to work in the recipe. So – brain working in fevered overdrive, I came up with the idea of using some fennel POLLEN instead!

Far more subtle in flavor, and since it is a powder, no chance of biting into a too-strong fennel seed and mucking up the flavor balance on the next bite! You can purchase a large quantity of top-quality fennel pollen from here – you will use it a lot in your cooking, I promise.

This stuff is culinary GOLD – it is awesome on so many different things, but I especially enjoy it on steamed vegetables to liven them up as well as a variation of standard sesame seeds on challah bread!