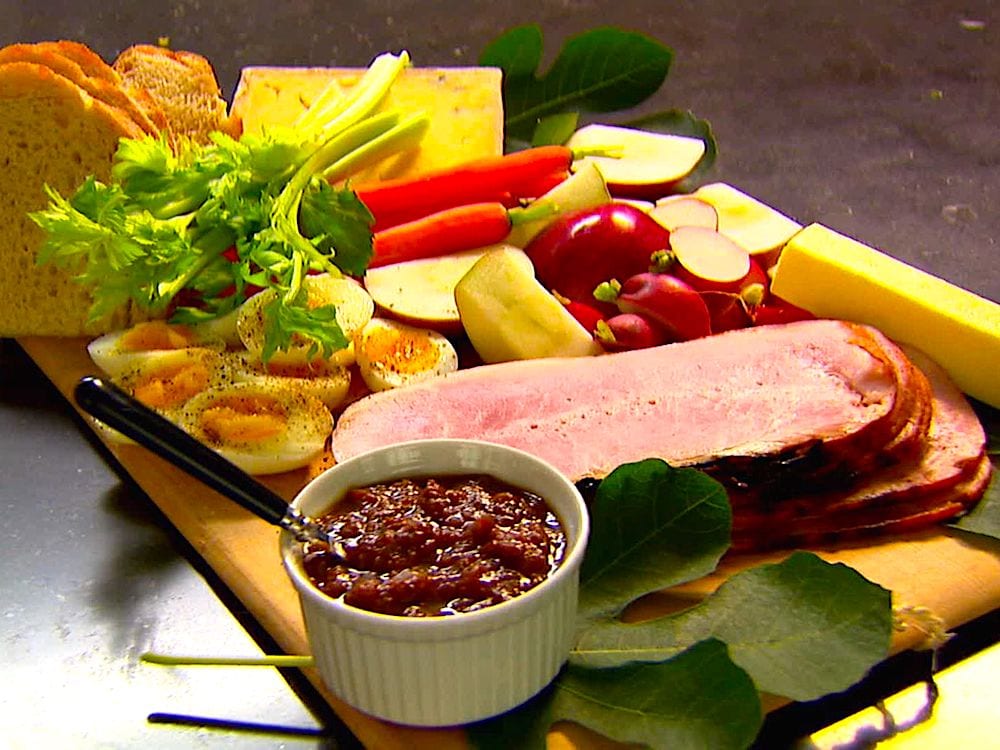 Citizens, it is an open secret that the supreme majesty incarnate – the mighty TFD Himself! – loves complex recipes and flavors that are resonant with interwoven and harmonious blends in a true gustatory symphony! However, I also enjoy simple recipes and clean, sharp flavors as well – as best exemplified by this classic recipe of England for one of my favorite lunches!

A ploughman’s lunch (often abbreviated to just ploughman’s) is an English cold meal which is based on bread, cheese, and onions and usually accompanied by butter and some form of pickle. Additional items such as ham, hard boiled eggs and apple can also be added. As its name suggests, a ploughman’s lunch is most commonly eaten at lunchtime. The meal is particularly associated with public houses and is often accompanied with beer.

Beer, bread, and cheese have been combined in the English diet since antiquity, and have been served together in inns for centuries.

However, the specific term “ploughman’s lunch” is believed to date no further back than the 1950s, when the Cheese Bureau (a marketing body affiliated with the J. Walter Thompson advertising agency) began promoting the ploughman’s lunch in pubs as a way to increase the sales of cheese, which had recently ceased to be rationed. Its popularity increased as the Milk Marketing Board promoted the meal nationally throughout the 1960s.

Pierce the Ploughman’s Crede (c.1394) mentions the traditional ploughman’s meal of bread, cheese and beer. Bread and cheese formed the basis of the diet of English rural laborers for centuries, with skimmed-milk cheese, supplemented with a little lard and butter, forming the main source of fats and protein; onions and leeks, in the absence of expensive seasoning, were the “favored condiment”. The reliance on cheese rather than meat protein was especially strong in the south of the country.

As late as the 1870s, farmworkers in Devon were said to eat “bread and hard cheese at 2d. a pound, with cider very washy and sour” for their midday meal. While this diet was associated with rural poverty, it also gained associations with more idealized images of rural life. Anthony Trollope in The Duke’s Children has a character comment that “A rural labourer who sits on the ditch-side with his bread and cheese and an onion has more enjoyment out of it than any Lucullus”.

Ploughmen, like other farm laborers, generally ate their midday or afternoon meal in the fields.

The Oxford English Dictionary notes the first recorded use of the phrase “ploughman’s lunch” as 1837, from the book Memoirs of the life of Sir Walter Scott by John G. Lockhart, but this stray early use may have meant merely the sum of its parts, “a lunch for a ploughman”.

While farm laborers usually carried their food with them to eat in the fields, similar food was for a long time served in public houses as a simple, cheap meal. In 1815 William Cobbett recalled how farmers going to market in Farnham, forty years earlier, would often add “2d. worth of bread and cheese” to the pint of beer they drank at the inn stabling their horses.

The OED’s next reference is from the July 1956 Monthly Bulletin of the Brewers’ Society, which describes activities of the Cheese Bureau. It describes how the Bureau exists for the admirable purpose of popularizing cheese and, as a corollary, the public house lunch of bread, beer, cheese and pickle. This traditional combination was broken by rationing; the Cheese Bureau hopes, by demonstrating the natural affinity of the two parties, to effect a remarriage.

This implies that a “traditional combination” of bread, beer, cheese, and pickle was popular before rationing in the United Kingdom (during and after World War II). Indeed, many pubs served little else: in 1932 Martin Armstrong described stopping at village inns for a lunch of bread, cheese and beer, noting that “On these occasions in country inns when bread, cheese and beer seem so extraordinarily good, the alternative is generally nothing; and compared with nothing bread, cheese, and beer are beyond compare”.

By the 1950s the meal was certainly being referred to by forms of the name later used to promote it. In 1956, author Adrian Bell reported: “There’s a pub quite close to where I live where … all you need say is, ‘Ploughboy’s Lunch, Harry, please’. And in a matter of minutes a tray is handed across the counter to you on which is a good square hunk of bread, a lump of butter and a wedge of cheese, and pickled onions, along with your pint of beer”.

Only one year later, in June 1957, another edition of the Monthly Bulletin of the Brewers’ Society, referred to a ploughman’s lunch using exactly that name, and said that it consisted of “cottage bread, cheese, lettuce, hard-boiled eggs, cold sausages and, of course, beer”. The Glasgow newspaper The Bulletin from 15 April 1958 and The Times from 29 April 1958 refer to a ploughman’s lunch consisting of bread, cheese and pickle.

The meal’s rise in popularity during the 1970s has been argued to be at least partially based on a British cultural “revulsion from technology and modernity and a renewed love-affair with an idealized national past”. The meal was, however, primarily favored by caterers because it was simple to prepare, required no cooking, was not labour-intensive and involved no meat, meaning there was the potential of high profit margins.

The 1983 film The Ploughman’s Lunch, from a screenplay by Ian McEwan, has a subtext that is “the way countries and people re-write their own history to suit the needs of the present”. The title is a reference to the way the supposed traditional meal was apparently used as a way to get people to eat meals in pubs.

As noted on thespruceeats.com:

Although the items can vary, the contents of a ploughman’s lunch are always cold, and generally include crusty bread and cheese, plus pickled onions and chutney. The lunch may also contain a selection of cold meats, ham, maybe a slice of pate and a slice of pork pie, and sometimes slices of apple or other seasonal fruit. And since it is eaten at a pub, beer is the natural accompanying beverage.

Traditionally the cheese, bread, and pickles would be homemade by the ploughman’s wife, making it a cheap and substantial lunch. Today, a good ploughman’s lunch will be cheeses of the region and at the very least British—the same goes for the meats and other accompaniments. The bread must be a thick wedge of crusty bread or a baguette—anything less will not hold up when piled high with cheese, chutney, and pickles.

A good farmhouse cheddar (such as Pyengana, Maffra, Isle of Mull) is the heart and soul of a ploughman’s.

Citizens, I am pleased to share my version of the classic with you – it hews closely to tradition, though I have updated it with a few ingredients that I feel are quite complimentary. Branston Pickle is a 100% necessity for this recipe, IMHO – you can buy it here. Maldon sea salt flakes are also an important element for texture and flavor – get it here. The pickled onions I most prefer for this recipe may be purchased here.

The butter is also important and Kerry Irish Butter makes some of the best I’ve had that is easily obtainable. The classic recipe calls for hard-boiled eggs, but I prefer deviled eggs – specifically, my recipe for them!  Use either, as you see fit.

Enjoy the simplicity and savor of this classic recipe with a tall glass of beer!