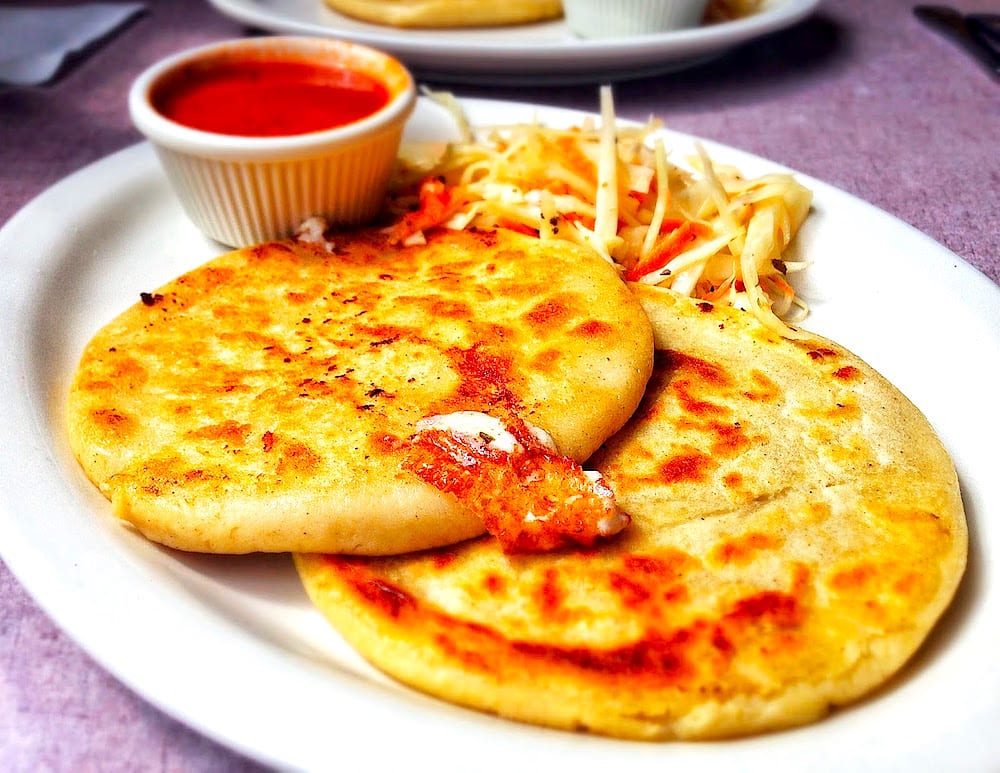 Pupusa is a traditional Salvadoran dish made of a thick, handmade corn tortilla (made using masa de maíz, a cornmeal dough used in Mesoamerican cuisine) that is usually filled with a blend of the following:

cheese (queso) (usually a soft cheese called Quesillo found throughout Central America)
cooked and seasoned pork meat ground to a paste consistency (called chicharrón, not to be confused with fried pork rind, which is also known as chicharrón in some other countries) refried beans (frijoles refritos), or queso con loroco (loroco is a vine flower bud from Central America).

Nixtamal is basically the same corn dough, but it has undergone a preparation process involving an alkaline solution before cooking, which contributes to the peeling of the grains, making valuable nutrients available. This process was developed in Mesoamerica around 1500–1200 BCE. Early Mesoamericans used quicklime or slaked lime and ashes as the alkaline solution. Dried nixtamal is now commercially available.

Pupusas were first created centuries ago by the Pipil tribes who inhabited the territory now known as El Salvador. Cooking implements for their preparation have been excavated in Joya de Cerén, “El Salvador’s Pompeii”, site of a native village that was buried by ashes from a volcano explosion, and where foodstuffs were preserved as they were being cooked almost 2000 years ago. The instruments for their preparation have also been found in other archaeological sites in El Salvador.

The pre-Columbian pupusa were vegetarian and half-moon shaped. They were filled with squash flowers and buds, herbs such chipilin and mora, fungi and salt. By 1570 meat had been incorporated into the filling, as noted by Franciscan monk Bernardino De Sahagun.

In the late 1940s, pupusas were still not widespread across El Salvador, and were mostly localized in the central towns, such as Quezaltepeque, and cities of the country. As the population began migrating to other areas in the 1960s, pupusa stands proliferated across the country and in neighboring areas of Honduras and Guatemala, sometimes with variations in shape, size or filling.

On April 1, 2005, the Salvadoran Legislative Assembly declared pupusas as the national dish of El Salvador and every second Sunday of November would be National Pupusas Day. On September 25, 2011 the pupusas were named that year’s Best Street Food in New York.

My version of this wonderful street food combines several elements of other recipes into the ultimate pupusa! Yes, the refried beans are Mexican – deal with it, they’re the best I’ve ever tasted! This is not a simple recipe due to its many steps – that said, ! 🙂