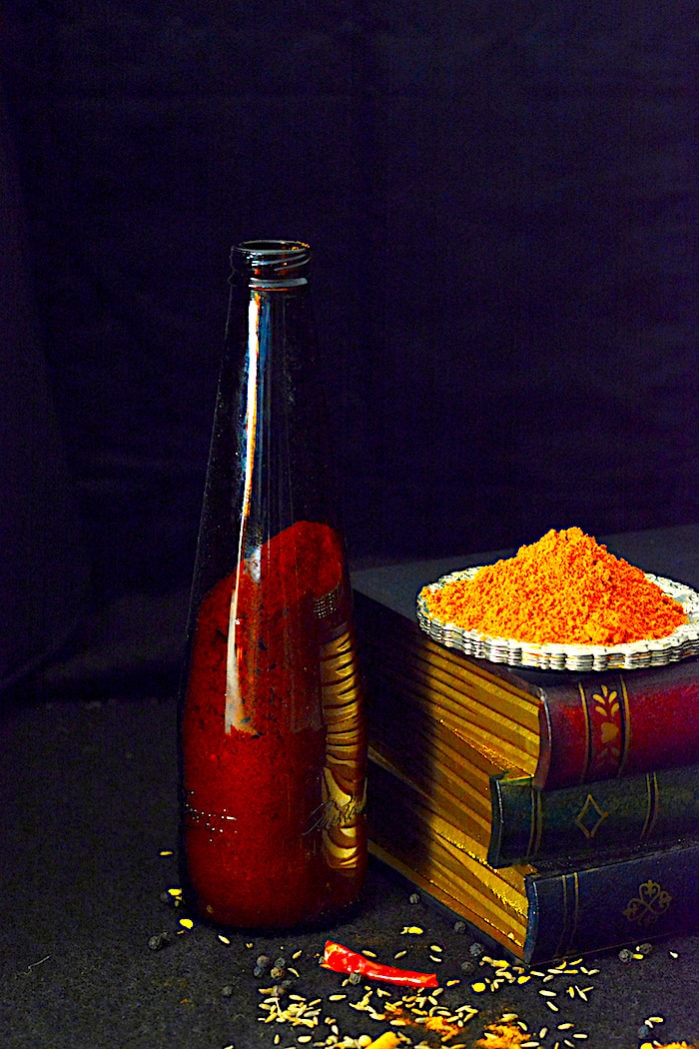 My Citizens! Gird your culinary loins, undertake prana-boosting meditation and buckle up, because today’s recipe from the Suzerain of Spice – YOUR TFD! – is the most complex spice blend I’ve ever shared…and that indeed is saying something!

40 – YES, 40! – spices are used in this unique recipe, known as ‘bottle masala’ – a trademark spice mix used by one of the least-known sub-groups in Indian culture! It is my supreme honor to share what promises to become one of your most used spice blends!

Bottle masala is unique to the so-called ‘East Indian’ population of Mumbai and is typically never sold in retail stores. It is made to a unique recipe specific to each family – more on this shortly. First though, let me explain how a group that came to be called ‘East Indians’ never actually lived in East India!

East Indians or East Indian Catholics, are an ethno-religious Indian Christian community who are members of the Catholic Church. They live primarily in the city of Mumbai, with smaller populations in portions of Palghar and Thane districts in the Indian state of Maharashtra.

When the Portuguese arrived in India in 1498, bringing a new wave of Catholicism with them, they weren’t aware that they had arrived in a land with the unique distinction of having received the good word from not one, but two of the apostles of Christ. According to tradition, Bartholomew the Apostle visited India and elsewhere during the first century AD and preached in Kalyn in the north of India, while Saint Thomas preached in Kerala in the south.

Under Portuguese conversion, newly-converted Christians and the older Christian community were welded into one, in and around present-day Bombay. However, this integration proved fragile not long after Bombay was transferred from Portuguese to British hands.

On May 11, 1661, the marriage treaty of Charles II of England and Catherine of Braganza—Catarina de Bragança, daughter of King João IV of Portugal—made Bombay part of the British Empire as intended since the British takeover of Surat (allegedly as part of Catherine’s dowry to Charles).

A weakened Portugal, no longer part of the Crown of Spain, had to oblige. Nevertheless, parts of present-day Mumbai (such as Bandra, Thane and Vasai) remained Portuguese well into the first third of the 18th century.

For Queen Victoria’s Golden Jubilee, the Christians of North Konkan changed their name from “Portuguese Christians” to “East Indian” to impress on the British government of Bombay that they were the earliest Roman Catholic subjects of the British Crown in that part of India and were entitled to certain natural rights and privileges compared to the newer converts under the Portuguese.

To distinguish the native Christians of the north Konkan who were now British subjects from the Goans who remained Portuguese subjects, the former adopted the designation of “East Indian”, in allegiance to the Queen and the East India Company.

During the 1960s, the Archdiocese of Bombay estimated that there were 92,000 East Indians in Bombay: 76,000 in suburban Bombay and 16,000 in the city. Bottle masala helped maintain the cultural identity of a small number of East Indians in a city of nearly 13M people.

The cuisine and language of the East Indian community in Mumbai remains distinct from the rest of the city. Bottle masala is the key flavor used in most East Indian dishes – the name comes from the storing of the spice mixture in amber or green-colored beer bottles to prevent light from fading the color and flavor of the masala.

The problem in replicating this recipe outside the community is two-fold. First, every East Indian family uses a different recipe for bottle masala – some use 10 spices, some 20, some say that the most sublime use up to 40! The second issue is that the family matriarchs refuse to share the recipe(s) with anyone outside the family – and sometimes, not even then!

As such, it is ludicrously hard to come up with a recipe that does justice to the glory of bottle masala – but TFD is nothing if not obsessively tenacious and I have striven to track down an authentic recipe to share!

I was able to get a decent foundation to start by consulting a long out-of-print cookbook used by the East Indian Community called – unsurprisingly – The East Indian Cookery Book. I spent a long time trying to track it down, but was unsuccessful – however, I did manage to find a kind East Indian food blogger who sent me a picture of the recipe in question! Thank you so much to Karen Ahmed – please check out her great food blog here. 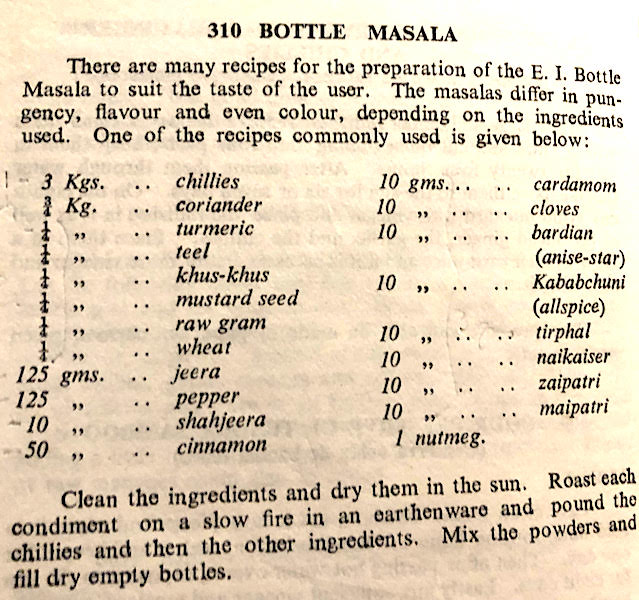 First goal achieved – but so much more to go! After a ludicrous amount of research, including this great article from Gastro Obscura, I have at last achieved glorious culinary vindication and victory – I have created a 40-ingredient version of this most complex of spice mixes, rivaled only by my 36-ingredient Moroccan ras-el-hanout spice blend!

Typically, this spice blend is made in October, before the monsoon season and is made in huge quantities, enough to last a gigantic family the entire year, and probably used nearly every day. I’ve reduced the massive quantity down to something more reasonable for a smaller household using it only occasionally – but it still makes a lot, and given the expense and time needed to make it, that’s a good thing.

The ingredients may be purchased at their respective links – I have tried to consolidate the spices to be sourced from as few different places as possible to make shipping less onerous. Most of the spices are sourced from India, where they are both cheaper and fresher. Some of them are incredibly rare even in India – tracking down sources was a huge pain, but I succeeded!

Citizens, bottle masala is the most complex spice blend on planet Earth – it is now yours for the making and know that it is not only supremely delicious, you are also partaking of a culture that is rarely given its due, and sharing in a heritage of centuries! Even the most pedestrian of dishes is supremely elevated by adding this mixture in – the spice blend enhances the natural flavors of the food and supports other flavors without overwhelming them.