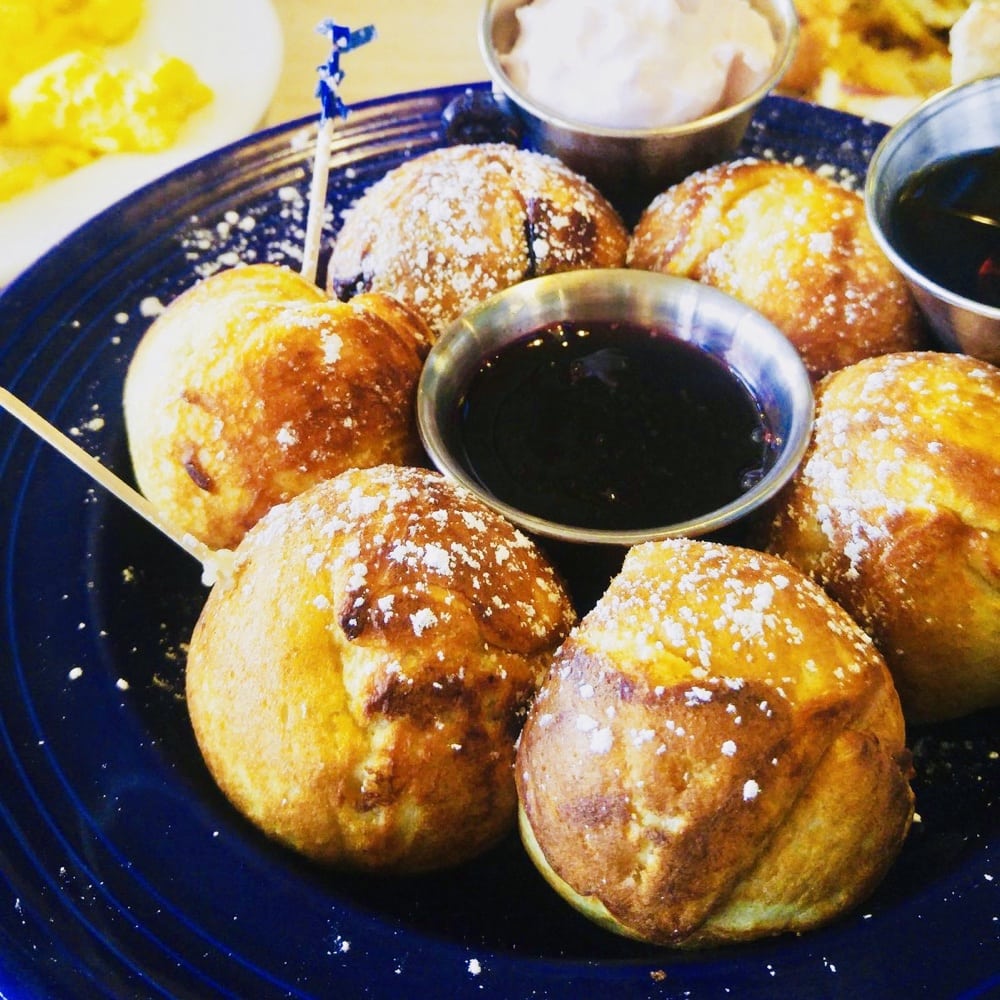 , your supreme Sovereign of sweetness – the mighty TFD! – has a great, unplumbed depth of delight when it comes to pancakes! Make them spherical and Scandinavian and you will discover the toothsome joy of Danish æbleskiver!

Æbleskiver are Danish snacks that are – as just noted – spherical in shape.They were traditionally cooked with apple (æble) slices (skiver) but apples are now sadly very rarely included in modern Danish forms of the dish.

Somewhat similar in texture to European pancakes crossed with a popover or Yorkshire pudding, æbleskiver are solid like a pancake but light and fluffy like a popover. The English language spelling is usually aebleskiver or ebleskiver.

One story about the origins of æbelskiver is that during the time of the Vikings, when they roamed the coastal waters of England and the Atlantic, one band of these rough Vikings was hard-hit in battle. As they returned to their ship with dented horn helmets and shields, they made pancakes to regain their strength. They didn’t have proper cookware so they greased their dented shields and poured the batter on them over a fire. The first aebleskivers were born.

Æbleskiver are today cooked on the stove top by baking in a special pan with several hemispherical indentations. The pan exists in versions for gas and electrical stoves (the latter with a plain bottom). Pans are usually made of cast iron, allowing good heat retention. Traditional models in hammered copper plate exist but are today used primarily for decoration.

The batter for æbleskiver usually includes wheat flour, which is mixed with buttermilk, milk or cream, eggs, sugar and a pinch of salt (some recipes also include fat (usually butter), cardamom and lemon zest) and a leavening agent, most often baking powder, but sometimes yeast, to aerate the batter.

Batter is poured into the oiled indentations and as the æbleskiver begin to cook, they are turned with a knitting needle, wooden skewer or fork to give the cakes their characteristic spherical shape. Æbleskiver are not sweet themselves but are traditionally served dipped in raspberry, strawberry, black currant or blackberry jam and sprinkled with powdered sugar.

In Denmark, æbleskivers are traditionally eaten during the Christmas season and are often served with gløgg, Scandinavian mulled wine. They are often sold at Christmas markets, charity markets, Scouting functions, local sports gatherings and similar.

They are also served at children’s birthday parties, due to their popularity and easy preparation. Voluntary associations gain profit from preparing them from the pre-fried, frozen stage and selling them, usually three at a time, with the usual condiments.

In North America there are several annual events that celebrate æbleskiver and Danish culture, with churches and museums holding “Æbleskiver Suppers” and similar events.

A pair of wooden chopsticks are the best tool for turning in cast iron, as anything metal or too hard will scrape up the patina in your cast iron pan – this is to be avoided at all costs! Also to be avoided are non-stick coated pans or God help us, aluminum – they never hear evenly and will result in burned golf balls, trust me.

My version of these descendants of Vikings past takes a distinctly southern detour to the spice islands while still remaining totally true to the origins of the recipe. Unlike modern recipes, I have put back in the original apple filling, albeit seasoned to my taste with cinnamon, nutmeg and cardamom instead of the classic cinnamon alone. I also have them in bit form as opposed to slices, as I think it improves the flavor and texture of the final product.

I also use the original yeasted batter, as opposed to baking powder, as it gives a better lift and taste to the spheres. Lastly, another trip to the heady islands of spice is made by calling for powdered vanilla sugar instead of just regular powdered sugar and using coconut oil to grease the pan indentations instead of butter. By all means, use butter if you prefer not to have a slight taste of coconut – I happen to love it.

Don’t worry if the first batch or two didn’t turn out and flip all the way or if it doesn’t look quite “right” because they’ll still taste wonderful! You’ll quickly get the hang of it, never fear!

I know you will love these delights, ! 😀