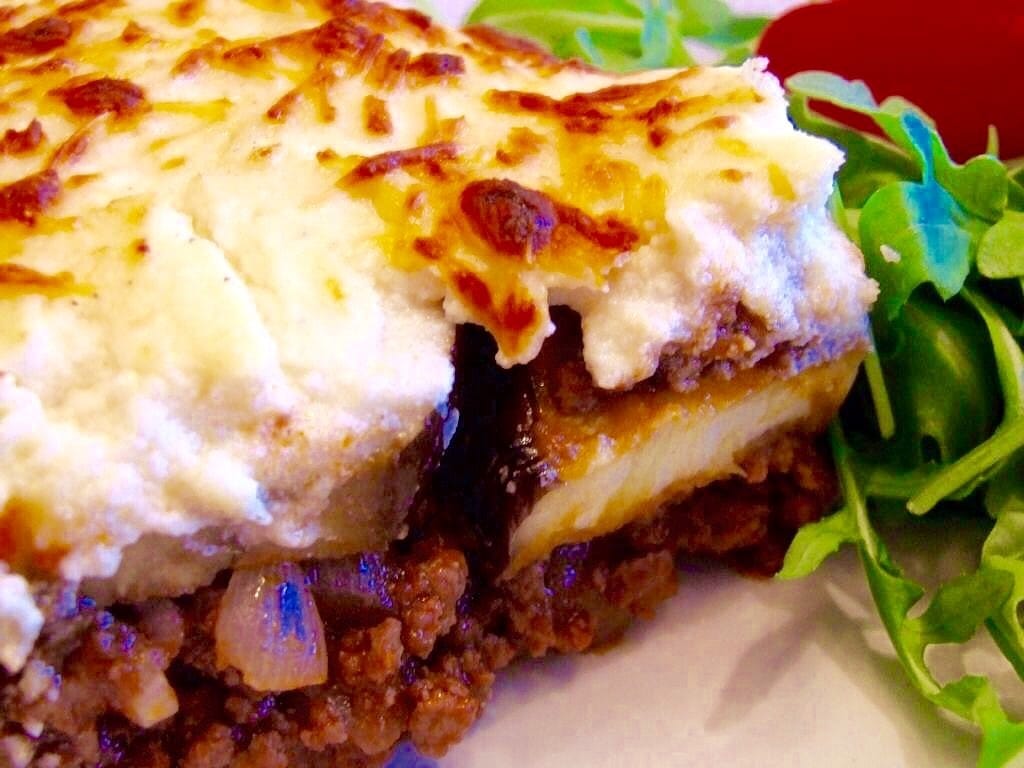 Citizens! This afternoon, I was most privileged to enjoy what was the best moussaka of my life. It was at a Turkish restaurant in San Francisco – despite what you may have thought, Turks do indeed have moussaka as well as the Greeks!

The best-known version in Europe and the Americas is the Greek variant created in the 1920s by Nikolaos Tselementes. Many versions have a top layer made of milk-based sauce thickened with egg (custard) or flour (béchamel sauce). In Greece, the dish is layered and typically served hot. This is quite different from the versions that continue to be made in Turkey and the Middle East. In Turkey, mussaka consists of thinly sliced and fried eggplant served in a tomato-based meat sauce, warm or at room temperature. In the Arab countries, it is often eaten cold, but occasionally hot as well.

The English name for moussaka was borrowed from Greek mousakás (μουσακάς) and from other Balkan languages, all borrowed from Ottoman Turkish, which in turn borrwed it from Arabic musaqqa‘a (مسقعة), literally “that which is fed liquid”. The word is first attested in English in 1862, written mùzàkkà.

Most versions are based primarily on sautéed aubergine (eggplant) and tomato, usually with minced meat, mostly lamb. However, the Greek version includes layers of meat and eggplant topped with a Béchamel (“white”) sauce, and baked. It seems likely that the Greek moussaka has Arab origins and is related to the Levantine musakhkhan, with the word moussaka derived from this Arab word.

The modern Greek version was created by the French-trained Greek chef Nikolaos Tselementes in the 1920s. A classic recipe has three layers that are separately cooked before being combined for the final baking: a bottom layer of sliced eggplant sautéed in olive oil; a middle layer of ground lamb lightly cooked with chopped or puréed tomatoes, onion, garlic, and spices (cinnamon, allspice and black pepper); and a top layer of Béchamel sauce or savory custard.

The composed dish is then layered into a pan and baked until the top layer is browned. Moussaka is usually served warm, not piping hot; if cut hot out of the oven, moussaka squares tend to slide apart and consequently the dish needs some resting time to firm up before serving. Reheating, however, does not present the same problem.

The moussaka I enjoyed in San Francisco was not layered, as the Greek version is. Here, ground beef (not lamb) is mixed with tomato sauce and spices plus thinly-sliced eggplant. In this particular version, it did use a bechamel topping that had a cheesy goodness (Turkish moussaka does not normally use bechamel, but Greek always does) plus it uniquely used red peppers and most importantly mint in the meat filling. It also mixed zucchini with the eggplant, a touch I especially liked.

I of course immediately sought to replicate this – since it combines both Greek and Turkish elements I call my version “Cypriot” after the island of Cyprus where both nationalities reside. Also, I am specifying Cypriot Halloumi cheese and there is also a moussaka served on the island as well.

The English name for moussaka comes from modern Greek mousakás (μουσακάς), which derived from the Turkish musakka, which itself came from Arabic musaqqa‘ah (مسقعة), meaning “chilled”.

Citizens, (immodestly) I find my recipe to be totally delicious and I hope you will try this magnificent fusion of two mighty cuisines for yourself! A factoid for you as well – Cyprus has a special place in the heart of any secular Israeli, as they must be married outside of Israel for the marriage to be considered legal if htey aren’t orthodox Jews. Cyprus is the closest friendly country to Israel and thus most Israelis get married there!