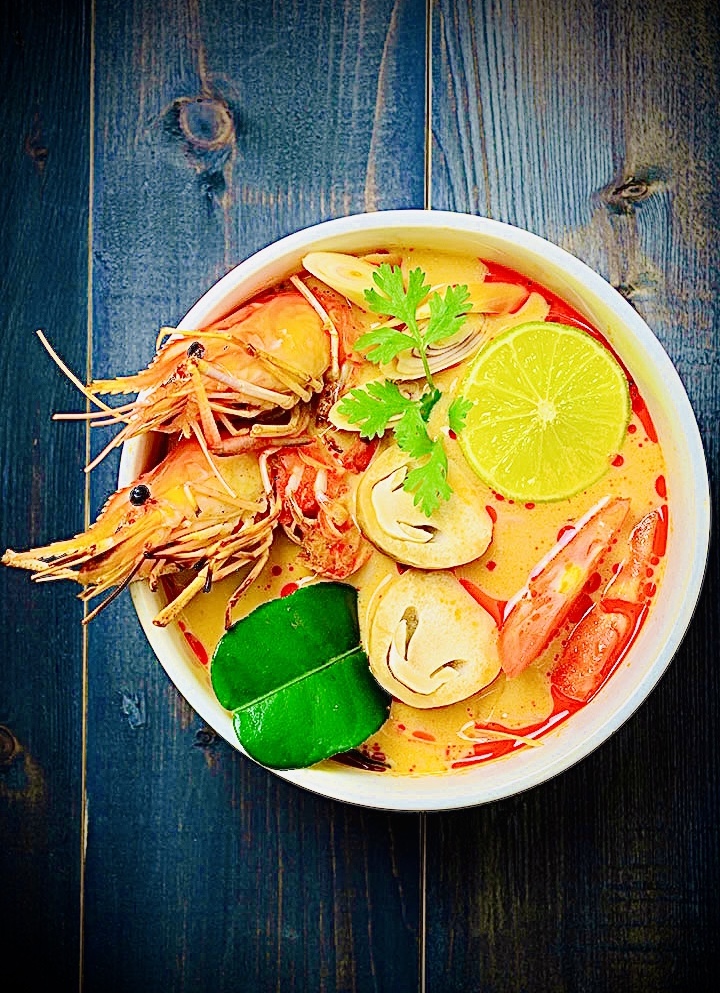 Citizens – the Duke of Depression, the Sultan of Sadness will obviously need to adjust His titles, because after 3 straight days of feeling like My old self it is high time to get back to a steady cadence of regular posting once again! This will be My third post in three days, and I am very excited to share a personal favorite soup recipe of Mine – I speak of the glittering kaleidoscope of flavors that alone is tom yam goong! This is a Thai hot and sour soup with freshwater prawns, herbs and a plenitude of spices that is like an artist palette of tastes for your palate! It will be a great pleasure to share this recipe with TFD Nation, so buckle up, Citizens! 😀

Tom yam (also transliterated as tom yum) is a type of hot and sour Thai soup, usually cooked with shrimp – the words ‘tom yam’ are derived from two Thai words. Tom refers to the boiling process, while yam means ‘mixed’. Tom yam is characterized by its distinct hot and sour flavors, with fragrant spices and herbs generously used in the broth.

The taste of tom yam is based on sour and spicy flavors. A red chili jam paste known as nam prik pao (Thai: น้ำพริกเผา) is added: this gives the soup a bright orange color and makes the chili flavor more pronounced. This is prepared as a base of the soup, to which water or stock, herbs and meat are added. The nam prik pao is made from roasted chilies, shallots, and garlic and the ingredients are best grilled on a charcoal fire.  The most popular tom yum base is river shrimp called tom yum goong.

The essential ingredients of tom yam are herbs such as lemongrass, galangal, and kaffir lime leaves. Other ingredients are also important, especially Thai chilies, mushroom, coriander leaf (cilantro), tomatoes, sweet white onions, lime juice, sugar, and fish sauce. In the modern popularized versions the soup also contains mushrooms—usually straw mushrooms or oyster mushrooms. The soup is often topped with a generous sprinkling of fresh chopped cilantro (coriander leaves). Tom yam nam khon is a variety with coconut milk or evaporated milk and it is this veritable variation that we will be discussing in today’s post.

Less well known outside Thailand is tom khlong (ต้มโคล้ง), a spicy sour soup where the sourness, however, does not derive from lime juice but instead through the use of tamarind – I happen to like the addition of tamarind to my tom yum, so even though it is not traditional, I do add a small amount in addition to lime juice for added layers of sour complexity. Tom som (Thai: ต้มส้ม) are soups that are also very similar to tom yum but most often do not contain lemongrass or kaffir lime leaves. Depending on the type of tom som, the acidity can be derived from lime juice or from the use of tamarind.

As noted in this excerpted and intriguing article I found on brighttv.co.th, Thai people take this soup VERY seriously indeed, to the point of asking the United Nations to list it as part of the official world cultural heritage list:

On March 23, last year, the Council of Ministers (Cabinet) approved the proposal of adding “Tom Yam Kung” as a representative to the UNESCO list of ‘intangible cultural heritage of humanity’.

The reason why it was approved is because Tom Yum Goong is a food that reflects the lifestyle of the riverside people who live a simple life. Bring shrimp that can be found nearby. and medicinal plants grown in the household to cook and to be registered as an intangible cultural heritage this time in order to promote the conservation and continuation of what has been passed down through word of mouth from one generation to the next.

In addition, Tom Yum Kung also meets the criteria for intangible cultural heritage of humanity as defined in the 2003 Convention on the Preservation of the Intangible Cultural Heritage as follows: “It was originally an oral inheritance in the household from generation to generation. There is no history or fixed written record.”

Although the exact history of Tom Yam Goong is not fully known, it is widely believed that it is a Thai soup originating from Central Thailand, where there is an abundance of fresh shrimp in the Chao Phraya River.

Over the years, the soup has become a favorite in Thailand and quickly spread around the world thanks to its relatively simple preparation and fantastic flavors. Many Western cultures have been exposed to Tom Yam Goong and it has become a staple dish of Thai restaurants that serve customers from all over the world.

New ingredients have been added here and there, most notably the choices of meat and the herbs used in creating the paste. While some modern versions of Tom Yam Goong use straw mushrooms or oyster mushrooms, some restaurants added Nam Phrik Phao, a Thai chilli paste which gives the Tom Yam soup an orange color and enhances the chili flavor in the soup. TFD heartily endorses this addition, BTW!

An interesting story about the popularity of Tom Yam Goong is that the 1997 financial crisis which struck many Asian countries became known as the Tom Yum Goong crisis since it all started in Thailand.

As noted previously, this particular version of tom yam goong uses evaporated milk to achieve its creaminess – NOT coconut milk! As to why this imported ingredient is preferred by Thais for the soup – that is just another mystery. Thankfully, unsweetened (yes, be SURE it is unsweetened or you’ll regret it!) evaporated milk is easily found in any supermarket! Be sure and buy the extra-large freshwater prawns with head and claws attached if at all possible – if they aren’t available, go with the biggest head-on saltwater prawns you can find. Worst case – just get shell-on shrimp as big as you can find, but they are FAR better for the stock (and for eating!) with the heads still attached!

Canned straw mushrooms add a slippery and pleasant texture to the soup as you eat them – you can easily buy a decent-quality can of them on Amazon here. The dried puya chilies can be easily purchased here and fresh kaffir lime leaves of top quality may be purchased from here. Nam prik pao red chili paste of excellent quality is mercifully available on Amazon from here, the best fish sauce is this one, coconut sugar (aka palm sugar) is here, tamarind paste is here and the best oyster sauce in the world is actually from Thailand – it’s found here.

Citizens, tom yam goong is truly a special soup indeed and if you’ve never tried it – trust Me, you’re in for a truly special treat indeed! 🙂