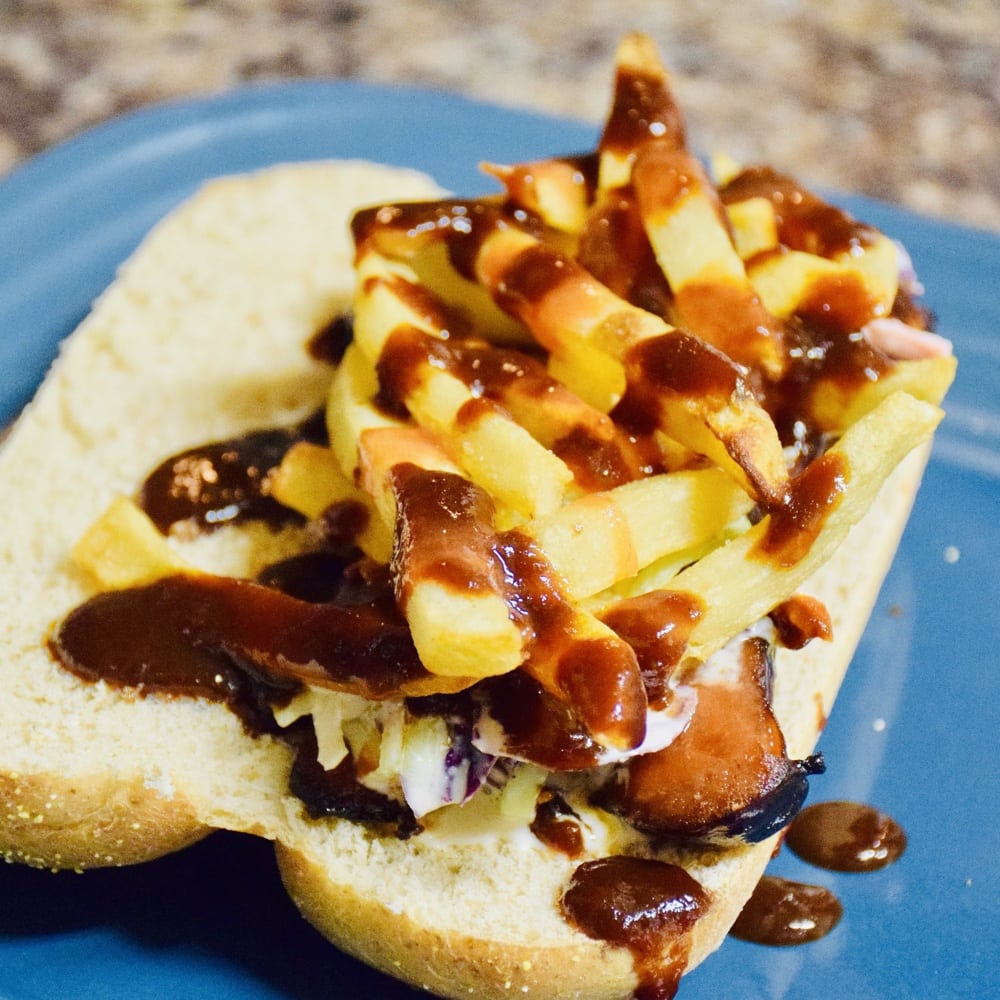 My Citizens, the New Year swiftly approaches and I have meditated long and hard on what the last recipe of 2018 on TFD Nation should be. Rather than a rare gourmet delicacy from afar, I have decided the humble Polish Boy sandwich from Cleveland shall close out 2018!

The Polish Boy is a sausage sandwich native to Cleveland, Ohio. It consists of a link of kielbasa placed in a bun, and covered with a layer of french fries, a layer of barbecue sauce and/or hot sauce, and a layer of coleslaw.

While the sausage is typically grilled, some establishments will quickly deep fry the sausage after grilling and prior to assembling the sandwich.

While Polish Boys can be found at various establishments throughout Cleveland, a popular place is Freddie’s Southern Style Rib House, known for their southern style barbecue sauce. Esquire named theirs as one of the best sandwiches in America, calling it “soul on white.”

Chef Michael Symon cited the Polish Boy as “The Best Thing I Ever Ate” on the Food Network, where he featured Seti’s Polish Boys on the show.

Polish Boy sandwiches consist only of a beef Polish sausage, french fries, coleslaw and barbecue sauce on a bun. Polish Boys can be found in most if not all of Cleveland soulfood restaurants. Chili, cheese, peppers and sauerkraut are not ingredients found on a Polish boy.

Chances are good that the first Polish Boy you ever ate came courtesy of Seti Martinez, who spent the past decade parked out front of Dean Supply, the restaurant equipment warehouse on Woodland.

His familiar white box truck, now moored wherever the mood strikes him, has sold more of Cleveland’s signature sandwiches over the past 10 years than likely all other vendors combined. That’s not only because they’re some of the best versions around, it’s that until recently, the sandwiches just haven’t been that widely available.

Despite the fact that the Polish Boy supposedly is “Cleveland’s Signature Sandwich,” there hasn’t exactly been a bumper crop of places at which to order and enjoy them.

Largely confined to local barbecue chains like Whitmore’s and Hot Sauce Williams, these two-fisted belly bombs seemed to be attracting more attention from outside our region than from within. Michael Symon gushed about them on the Food Network, Anthony Bourdain addressed them on No Reservations, Adam Richman pounded one on Man vs. Food, Esquire magazine included it in a list of America’s best sandwiches, and Serious Eats seriously considered it.

But thanks to a fresh wave of sausage-loving chefs and restaurant owners, we are seeing a bona fide resurgence — and improvement — of the gut-busting, shirt-staining Polish Boy. At new places like Mabel’s BBQ, Banter and Picnic, diners can sit back and relax with delightful, delicious versions of the bunned wonder.

Given that the sandwich holds such an esteemed place in our gastronomic history, one would expect reams of documentation on its origin and development. But there hasn’t been a lot written about the history of this seminal sandwich, which is odd given our fascination with all things food in this city.

With respect to the last connotation, my research pointed me to Virgil Whitmore as the originator. Whitmore launched his first barbecue shop in the Mount Pleasant neighborhood back in the 1940s before opening the more popular Whitmore’s Bar-B-Q at East 85th and Cedar.

Whitmore’s grandson Larry Turner, who now runs Mt. Pleasant BBQ, says that it was his grandad who first decided to combine ingredients that he already had on hand — bun, sausage, coleslaw, fries, barbecue sauce — into the infamous and famously messy sandwich.

Now, as to the ingredients for my version of the Polish Boy – rather than a simple kielbasa, I have decided to use Kasekrainer, a Central European sausage stuffed with bits of cheese that I find totally delicious in the sandwich. By all means, use kielbasa if you’re a purist but if you want to try Kasekrainer, you can buy them here.

The bbq sauce should be homemade – I call for Polish-style brown mustard in it, which you can buy here.

The cole slaw is modeled closely after the version sold in KFC, which I happen to love. My version is kickier, however, with horseradish, garlic and ground celery seed.

Citizens, this is a special recipe near and dear to my working man roots – I hope you find it in your busy schedules to try this at your earliest opportunity!