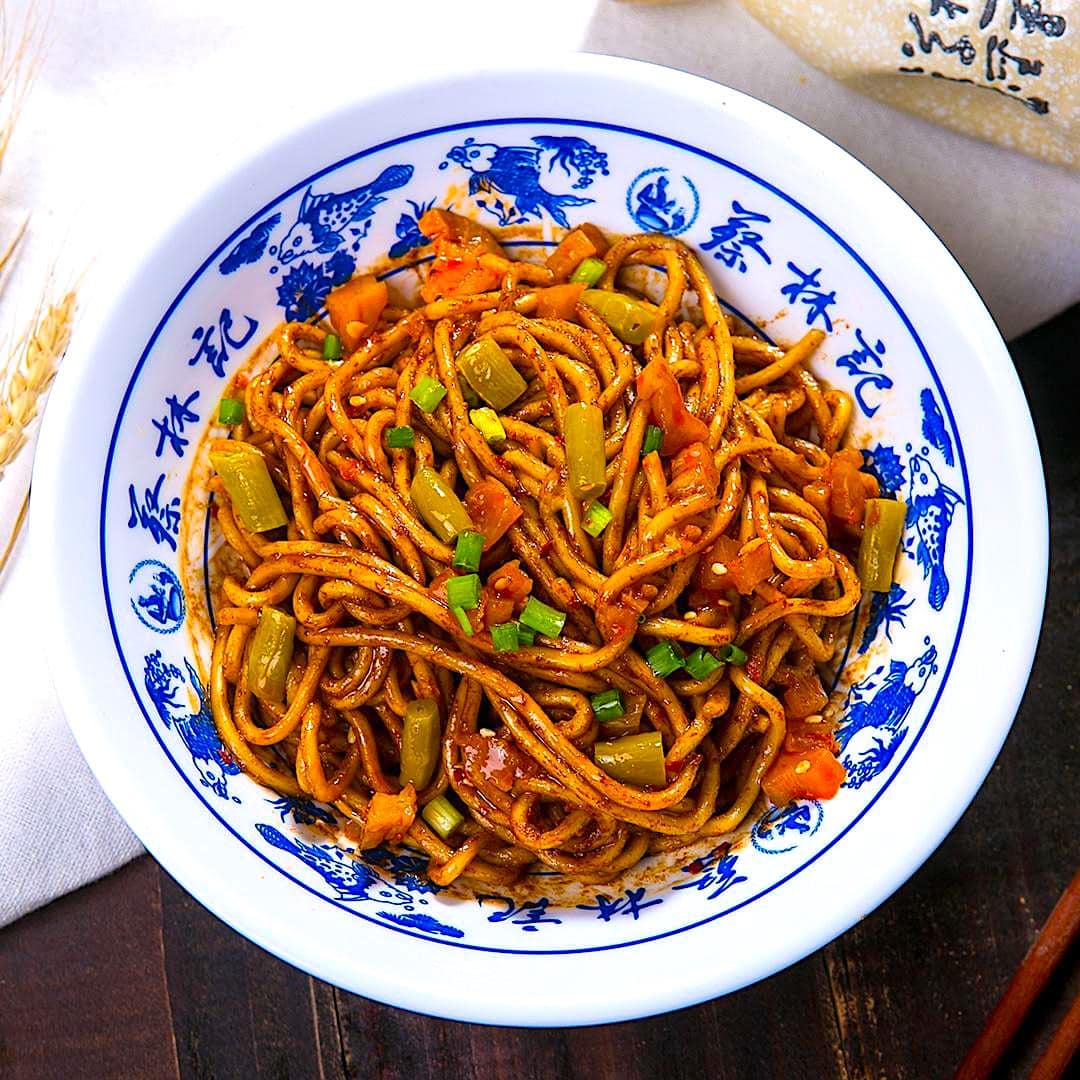 Citizens, we are now in the 4th week or so of the coronavirus pandemic that has spread throughout the world, and no place has been harder hit than the city of Wuhan where it was first diagnosed. Note that I did not say ‘originated’, as any virologist/epidemiologist will tell you it’s virtually impossible to say where a virus actually originates from – only where it was first encountered and identified as a new epidemic.

Wuhan has a proud gustatory history and this recipe for hot and dry noodles is one for which the city is well-renowned. I have seen far too many posts online ‘blaming’ the citizens of Wuhan for this epidemic and/or blaming the Chinese people for a host of reasons as to spreading it!

So, as to the dish itself:

Hot dry noodles (热干面 pinyin rè gān miàn), also known as reganmian, is a traditional dish of Wuhan, the capital of Hubei province in central China. Hot dry noodles have enjoyed a storied place in Chinese food culture for more than 80 years, and it is unique because the noodles are not in soup like most other Asian-style hot noodle dishes.

It is the most significant, famous and popular breakfast food in Wuhan, often sold in street carts and restaurants in residential and business areas. Breakfasts of hot dry noodles are available from as early as 5 am, and usually appears on night markets as a snack during late night times in Wuhan.

The recipe for hot dry noodles is quite different from the far more typical cold noodles and noodles in soup one might typically encounter in China’s street food scene.

Both Wuhan and Szechuan cuisine make extensive use of chilies to cleanse the palate and cope with the humid climate. The chef will cook the fresh noodles mixed with sesame oil in boiling water. When the noodles get cooked and cooled down, they become pliable. Before eating, the noodles will be cooked in the same process again. Finally, dressings including spring onion and sauce will be added.

The summer in Wuhan is extremely long, and the high temperature causes food’s rapid deterioration. As a result, people added dietary alkali into noodles to avoid deterioration, and this is the predecessor of hot dry noodles.

A widely circulated story as to the origins of the dish is that in the early 1930s, there was a small food stand operated by Bao Li, a hawker who made a living by selling bean noodles and noodle soups near a temple in Hankou. One day, Li poured sesame oil onto his noodles accidentally, and he boiled those noodles, then added shallot and other condiments on the next day and sold them the next morning hoping people would enjoy them. His noodles became very popular because of their unique taste, and customers asked Bao Li what kind of noodle it was, and Bao Li answered: Hot dry noodles.

Now, in searching out the most authentic recipe for this magnificent dish, I came across a recipe on reddit.com from u/mthmchris that is so good, so stringent in its requirements for authenticity, that I wish I had come up with it first! As such, my edits to his recipe are tiny, and I even hesitated to put my name on this, but decided the minor changes I made have indeed made it my own, though with a respectful bow to the Master in the process.

Reganmian, literally translated as ‘hot dry noodles’, is synonymous with the Hubei city of Wuhan. Starting from sun-up, vendors dot the city whipping together bowls for hungry commuters lining up for their morning fix. If I tell someone from Wuhan that I traveled up that way, one of the first questions from their mouth is “did you eat some reganmian?”

But before going to Wuhan, I honestly didn’t really get it. In China, you can absolutely find this noodle dish outside of Hubei – or at least cheap imitations. When I’d eat it where I live (Shenzhen), I was almost bewildered that it was… a thing. Seemed to me that hot dry noodles were simply some noodles mixed with a bit of sesame sauce, soy sauce, some accoutrements, and a drizzle of chili oil. Tasted fine of course, but how could that be such a much-beloved dish?

After you eat the real deal though, you immediately understand what you’ve been missing. See, a big component of hot dry noodles that most joints outside of Wuhan neglect is a lushui spiced braising liquid. Many of these hot dry noodle shops in Wuhan also sell braised beef, whether on the side or at a different time of day. They’ll take a big scoop of their spiced beef braising liquid and mix it in with the noodles – a spoonful of soy sauce is no substitute.

So this recipe is my best attempt to recreate that, the proper Wuhan hot dry noodles.

As to the noodles, you want to use fresh noodles if at all possible, preferably the alkaline ones sold in any good Chinese or Asian supermarket. These can be distinguished by their bright yellow color, which is not from eggs but due to a chemical reaction from the presence of a highly alkaline base in the pasta. Fresh ramen noodles are an excellent substitute, if they are thick enough. If for some reason you just can’t find any alkaline noodles, fear not as you can substitute fresh thick spaghetti, although the taste will not be quite the same.

There are a number of unique ingredients in this recipe, all of whom I am confident you will come to love as part of your culinary adventures with the Mighty One Himself! The spicy preserved radish that is one of the hallmarks of the recipe is very hard to find in the U.S., but you can buy it from here. The pickled long beans that are also a key ingredient are impossible to buy here, but I call for an ingenious and very close indeed substitute – pickled dilly beans, my preferred brand of which you can buy here.

In Wuhan, the recipe is classically prepared with a black sesame paste as opposed to the tahini we usually get here – thankfully, this ingredient may be easily purchased here. So a quick word on the name ‘hot dry noodles’ – the ‘hot’ refers to ‘re’ (热), that is temperature-hot, NOT spicy-hot. Everyone has their own heat tolerance, but generally you should only add enough chili oil to get this anywhere between ‘mild’ and ‘medium’ spicy for you. Best would obviously be a homemade chili oil, but the ever-popular ‘Laoganma Chili Crisps in Oil’ is a very good alternative.

Shanxi mature vinegar may be purchased here, my preferred brand of sesame oil is here, a decent shaoxing cooking wine may be bought here (though if you can find it, I prefer Pagoda brand, not this one), and dark soy sauce (not the same as regular soy sauce!) here. Also, an excellent quality of five spice powder is easily found here, as well. Note that the lushui braising liquid makes a LOT, but it freezes very well and will become a go-to for you in many dishes, I promise!

Citizens, I urge you to stay safe and not to panic during this coronavirus outbreak – so wear your masks outdoors, use gloves and carry LOTS of hand sanitizer. All will (hopefully) be well soon, and please think kindly on Wuhan and its citizens, they need our support during these trying times! I might recommend an excellent bowl of hot and sour soup alongside this, which was actually a medical prescription in its original form!