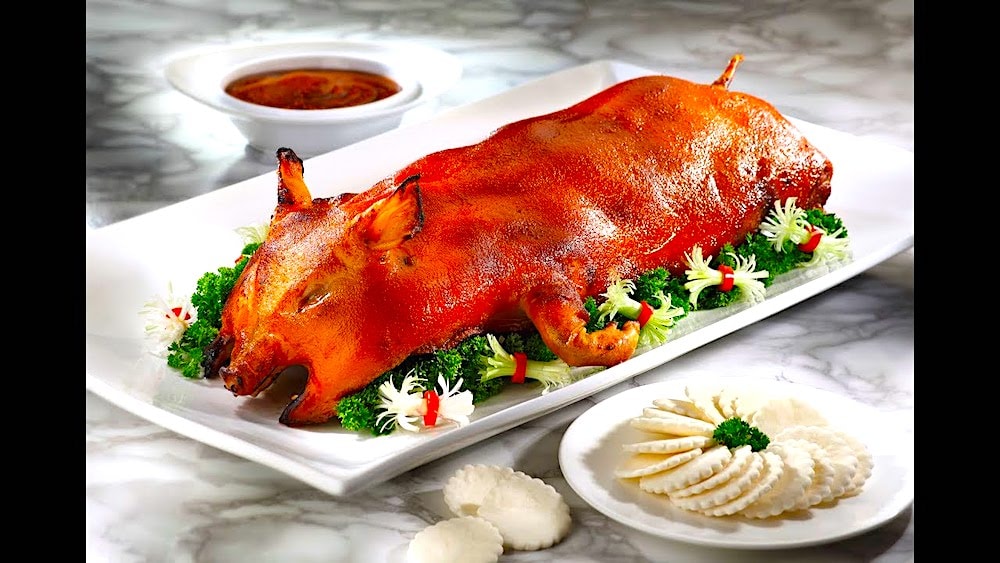 Citizens – allow me to say to all of you: 恭贺新禧 – respectful congratulations on the New Year!!!

Yes, today marks the start of the 2 weeks of celebration for the Chinese New Year – which according to the Chinese Zodiac is the year of the Earth Pig! It is for this reason we have been posting whole pig recipes here for the benefit of TFD Nation all week long! Today, we end on the ultimate destination for this series – Chinese roast pig!

Learn about the many customs surrounding Chinese New Year here.

Eating a whole pig is a VERY big deal in China. In various Chinese communities (especially in Southern China), a pig roast known as siu yuk is purchased for the sake of special family affairs, business openings, or as a ritualistic spiritual offering.

For example, a tradition is to offer one or several whole roast pigs to the Jade Emperor to celebrate a Chinese film’s opening with a roast pig; the pig is sacrificed to ward off evils to pray for the film’s success. One garnish used to make the dish look more appealing is a circular slice of pineapple and cherry and is often placed in a red box for luck.

As eruditely and eloquently written up by Christopher Tan on foodfella.com (this is lightly excerpted):

In the end, it all comes down to the sound. A discreetly dry, curt ripping, the noise of a cherub breaking the sound barrier, a micro-floe of ice breaking; the sound of ecstasy about to happen. Which it does, as your teeth gently rent the russet crispness and sink into a thin, pillowy layer of clean, sweet fat.

We’re talking about sucking pig, of course. (The Oxford Companion to Food helpfully points out the common error in calling it ‘suckling pig’ – in actual fact it is the mother pig who suckles, the infant who sucks).

Eighteenth century essayist Charles Lamb, who referred to himself as “the warmest of pig-lovers“, lyrically describes the joys of piglets in several letters to friends. “What a pity such buds should blow out into the maturity of rank bacon! …Was the crackling the colour of the ripe pomegranate?”

These sentiments have evidently been shared by humans in antiquity. Archaeological evidence suggests that pigs were domesticated in the Middle East and Mediterranean region between 7000 and 5000 years ago, and possibly even earlier, making the pig man’s next best friend after the dog.

That the old Chinese ideogram for the word ‘home’ is a combination of the ideograms for ‘pig’ and ‘roof’ indicates how far back and how important the roots of Chinese domestication of pigs.

Medieval and Renaissance recipes for sucking pig achieved an even higher level of flavour complexity. For example, French proto-gourmet Taillevent, includes in his Viandier cookbook of 1373 a highly elaborate preparation of pourcelet farci stuffed with cheese, egg yolks, chopped roast pork, chestnuts, and spices, then sewn up and roasted with bastings of vinegar, oil and salt.

Simpler versions of stuffed piglet are still important centrepieces at New Year festivities in Western and Eastern Europe, especially in Austria , for instance.

By virtue of its traits, the pig has much potential for being a vehicle for symbolism. It is extremely fecund, rudely large and physical, generally amiable, omnivorous, a rich source of protein and fat, and virtually entirely edible. Above all, it is delicious – but it may exact digestive retribution if improperly prepared.

Peoples’ attitudes toward the pig have therefore historically been somewhat ambivalent. The Greeks associated them with fertility rites and goddess cults, and pigs were used as sacrifices in both Egyptian and Graeco-Roman rites; conversely, Judaism and Islam are the best-known but not the only religions to attach culinary taboos to the pig. Across northern Europe , a Teutonic notion regards the pig as a bringer of good luck.

Regardless of its metaphysical attributes, all of the great pig-eating cultures – Italian, Spanish, Portuguese, Chinese, Balinese – have in their gallery of porcine greats a special pedestal for the sucking pig. Best when eaten at between 21 and 28 days old, it has a more dulcet character than the full-grown animal; its meat and fat have not yet taken on the more assertive flavour that solid feed produces.

Charles Lamb again: “O call it not fat – but an indefinable sweetness growing up to it – the tender blossoming of fat – fat cropped in the bud – taken in the shoot – in the first innocence – the cream and quintessence of the child-pig’s yet pure food – the lean, no lean, but a kind of animal manna – or, rather, fat and lean (if it must be so) so blended and running into each other, that both together make but one ambrosian result…”

Sucking pigs have been wedding fare since at least as far back as the Middle Ages, when ‘pigge ffarced’ was de rigeur at seriously grand banquets. As part of Chinese wedding custom, sucking pig is considered to represent the bride’s purity, perhaps more because of its rosy colour than anything else.

Traditional practices vary between dialect groups. For example, for some, a sucking pig is included in the dowry sent by the groom’s family to the bride’s house, a few days before the actual wedding; it may be cut up, the bride’s family keeping some and sending the rest back to the groom’s house.

For others, the groom presents a sucking pig to the bride’s family shortly after the wedding night, as a token to confirm that his beloved was indeed only his beloved. The added connotations of red as the colour of good fortune, and pork as signifying abundance – roast pork is often used as an offering to the gods in other household rituals – only serve to enrich the context.

Modern Chinese couples and families, it almost goes without saying, largely ignore the symbolic side of the sucking pig, and simply enjoy it for its own sake.

To properly make this feast, you will need one special implement, and it is NOT optional. To achieve the proper crackling skin that is the most cherished part of the meal to the Chinese, you must pierce it MANY times all over. Pig skin is very tough, but this implement makes it easy.

Unusual ingredients such as bean sauce,Chinese red vinegar, maltose, red fermented bean curd and dark soy sauce can all be found at their respective links. Please do also read the “master” instructions on how to prepare a whole pig here.

Again – Happy New Year of the Pig, – long life, happiness, wisdom, health and wealth to all of TFD Nation!