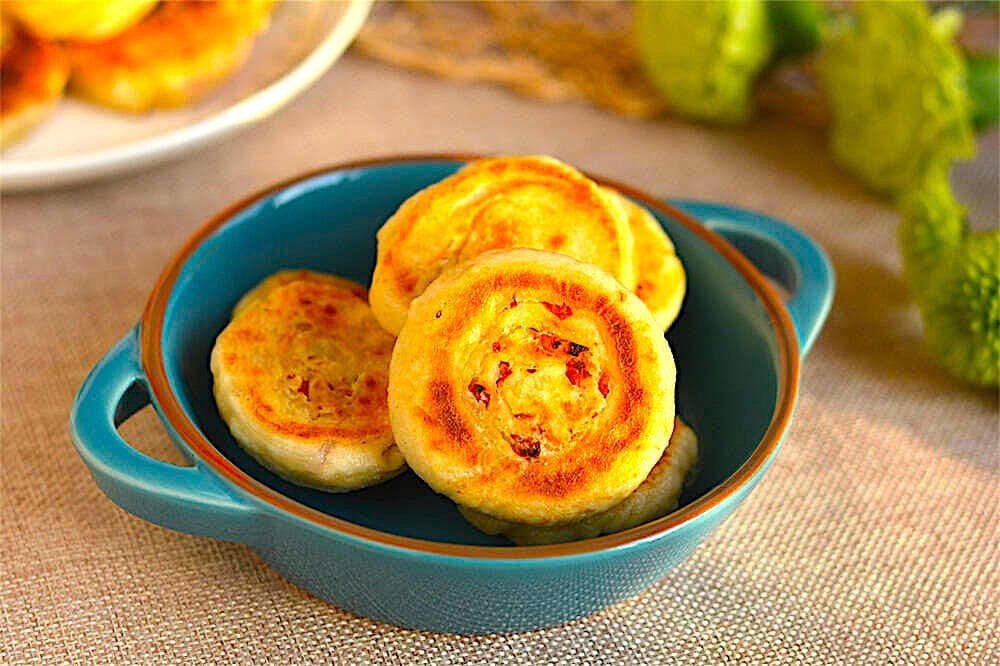 Citizens of TFD Nation! The Sagacious One – the incandescent and iridescent controlled explosion who alone is TFD! – salutes his fellow Americans on this day of independence! A day synonymous with good food, cold beer, and red-hot fireworks!

In the case of those living in Southern California, they were also just treated to a very long, protracted earthquake measuring 6.4 on the Richter scale only a few moments ago! That’s certainly one way to have a memorable holiday, though TFD prefers less movement of Terra Firma and more Aqua Vitae (aka strong alcohol) on this day of days!

Being the epitome of chaotic intent, I shall throw you a curve ball this Fourth of July and will avoid the obvious recipes for all-American apple pie, etc. – besides, I’ve already covered those in previous posts.

No, today I shall take you on a journey East – to the legendary home of fireworks themselves: China and to pan-fried scallion bread!

As noted in this highly excerpted article in Smithsonian magazine:

As early as 200 B.C., the Chinese were writing on green bamboo stalks and heating it on coals to dry. Sometimes if left too long over the heat, the wood expanded and even burst, with a bang of course. According to Scientific American, Chinese scholars noticed that the noises effectively scared off abnormally large mountain men. And, thus, the firecracker was born. By some accounts, fireworks were also thought to scare away evil spirits.

Sometime between 600 and 900 C.E., Chinese alchemists accidentally mixed saltpeter (or potassium nitrate) with sulfur and charcoal, inadvertently stumbling upon the crude chemical recipe for gunpowder. Supposedly, they had been searching for an elixir for immortality.

This “fire drug” (or huo yao) became an integral part of Chinese cultural celebrations. Stuffing the aforementioned bamboo tubes with gunpowder created a sort of sparkler. It wasn’t long before military engineers used the explosive chemical concoction to their advantage. The first recorded use of gunpowder weaponry in China dates to 1046 and references a crude gunpowder catapult. The Chinese also took traditional bamboo sparklers and attached them to arrows to rain down on their enemies. On a darker note, there are also accounts of fireworks being strapped to rats for use in medieval warfare.

A firework requires three key components: an oxidizer, a fuel and a chemical mixture to produce the color. The oxidizer breaks the chemical bonds in the fuel, releasing all of the energy that’s stored in those bonds. To ignite this chemical reaction, all you need is a bit of fire, in the form of a fuse or a direct flame.

In the case of early fireworks, saltpeter was the oxidizing ingredient that drove the reaction, as British scholar Roger Bacon figured out in the early 1200s. Interestingly, Bacon kept his findings a secret, writing them in code to keep them out of the wrong hands.

Firework color concoctions are comprised of different metal elements. When an element burns, its electrons get excited, and it releases energy in the form of light. Different chemicals burn at different wavelengths of light. Strontium and lithium compounds produce deep reds; copper produces blues; titanium and magnesium burn silver or white; calcium creates an orange color; sodium produces yellow pyrotechnics; and finally, barium burns green. Combining chlorine with barium or copper creates neon green and turquoise flames, respectively. Blue is apparently the most difficult to produce. Pyrotechnic stars comprised of these chemicals are typically propelled into the sky using an aerial shell.

Most modern fireworks displays use aerial shells, which resemble ice cream cones. Developed in the 1830s by Italian pyrotechnicians, the shells contain fuel in a cone bottom, while the “scoop” contains an outer layer of pyrotechnic stars, or tiny balls containing the chemicals needed to produce a desired color, and an inner bursting charge. Italians are also credited with figuring out that one could use metallic powders to create specific colors. Today, the shape that the firework produces is a product of the inner anatomy of the aerial shell or rocket.

Americans have been setting off fireworks to celebrate their independence since 1777, at least.

Even some of the very first Independence Day celebrations involved fireworks. On July 4, 1777, Philadelphia put together an elaborate day of festivities, notes American University historian James R. Heintze. The celebration included a 13 cannon display, a parade, a fancy dinner, toasts, music, musket salutes, “loud huzzas,” and of course fireworks. Heintze cites this description from the Virginia Gazette on July 18, 1777:

“The evening was closed with the ringing of bells, and at night there was a grand exhibition of fireworks, which began and concluded with thirteen rockets on the commons, and the city was beautifully illuminated. Every thing was conducted with the greatest order and decorum, and the face of joy and gladness was universal. Thus may the 4th of July, that glorious and ever memorable day, be celebrated through America, by the sons of freedom, from age to age till time shall be no more.”

There is a scholarly article I stumbled across that goes into great detail about how fireworks achieve their colors – read all about it here.

Before the 19th Century, the only colors that could be produced in fireworks were yellows and oranges, achieved through the use of steel and charcoal.

Later development involved Chlorates which introduced basic reds and greens to the repertoire. Good blues and purples were not developed until this century and the quest for the creation of a deep forest green-colored firework continues still to this very day.

Asian fireworks range from the most sublime ‘normal’ fireworks but can also be decidedly low-tech and still be absolutely stunning! See the art of Japanese fireworks in this video or watch Chinese blacksmiths make ‘fireworks’ by dashing white-hot liquid metal against a wall here.

Now that you have a proper appreciation for the history of fireworks from a Chinese perspective, let us tear into the steaming bread that is the heart of today’s posting: scallion bread!

This pan-fried savory delight is a rare bread from China – only Northerners enjoy wheat-based products, and bread like this is a hallmark of the cold Northeast, where a pan-fried scallion bread can warm you up in the sub-zero Winter cold.

My recipe is based very closely on one from the sadly departed Dr. Barbara Tropp of Princeton University, whose Chinese recipe books taught me so much about Chinese history, linguistics and tastes! Her scallion bread recipe makes a true bread, not the scallion pancakes so often seen in most Chinese restaurants in the States. She is truly missed.

I have tweaked her recipe in a few ways, not the least of which includes using Birch-smoked salt flakes, which add a smoky hit to the bread that is truly addictive. You can buy it here.

Citizens, this scallion bread will assuredly become your new favorite snack – of this, I have every possible confidence!