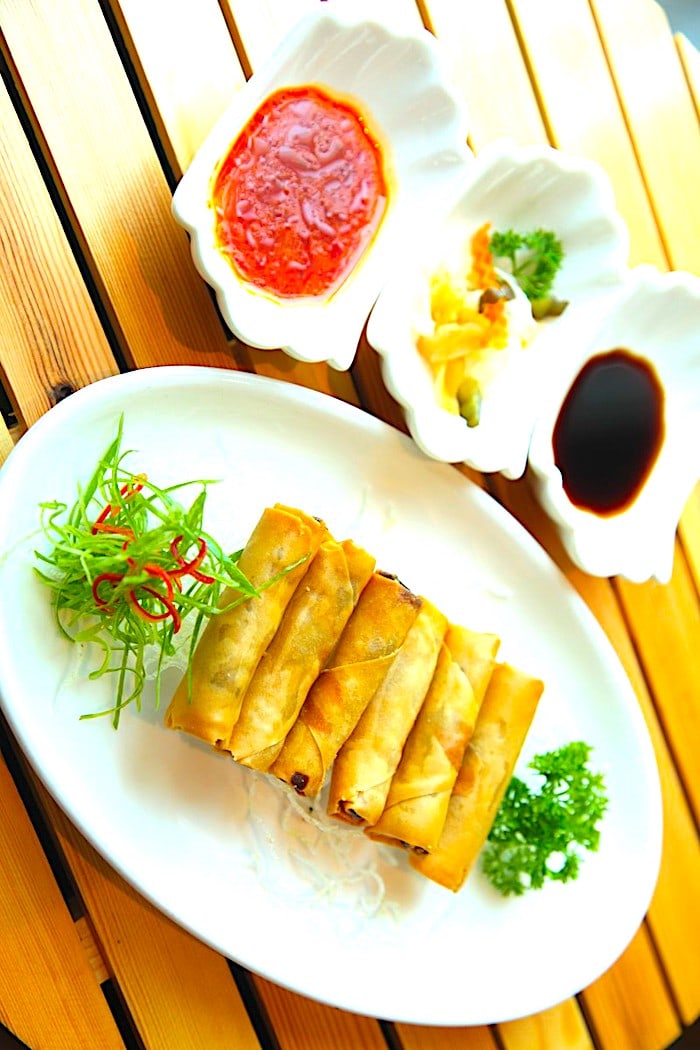 Citizens! The ourobouros of the Chinese Zodiac has at last come full circle, re-starting the eternal cycle of the 12 animals! Yes, tomorrow is indeed Chinese New Year and I wish to be the first to greet the proud members of TFD Nation with 新年快乐!, aka Xīnnián kuàilè in Mandarin and Gung hei fat choy in Cantonese – HAPPY NEW YEAR! There is much legend, lore and tradition surrounding this holiday, known as the ‘Spring Festival’ in today’s China. As such, we shall celebrate the advent of the Year of the Metal Rat with the very food item that is itself named after the festival – spring rolls! I – the Sinological Scholar who ALONE REIGNS as TFD! – shall be dropping some serious knowledge on you now, so buckle up! 😀

Chinese New Year (generally referred to as Lunar New Year globally) is the Chinese festival that celebrates the beginning of a new year based on the traditional Chinese Lunar calendar. China officially adopted the Gregorian calendar, used by the West, in 1912. After this, public celebrations of Chinese New Year waned or were even forbidden. In the late 20th century, however, the holiday was re-introduced to great acclaim as the ‘Spring Festival’.

According to the 2020 Chinese horoscope, the Lunar New Year starts in 2020 on Saturday, January 25th and ends on February 11th, 2021. The Rat is the first sign of the 12 animals zodiac cycle of Chinese astrology, and for this reason, 2020 is considered a year of new beginnings and renewals. Metal (Chinese: 金; pinyin: jīn), is the fourth phase of the Chinese philosophy of Wu Xing, and represents matter’s decline stage.

Metal is yin (cold) in character, its motion is inwards and its energy is contracting. It is associated with the autumn, the west, old age, the planet Venus, the color white, dry weather, and the White Tiger (Bai Hu) in Four Symbols. The archetypal metals are silver and gold. In Chinese Taoist thought, Metal attributes are considered to be firmness, rigidity, persistence, strength, and determination.

Chinese New Year is associated with innumerable myths and customs. The festival was traditionally a time to honor deities as well as ancestors. Within China, regional customs and traditions concerning the celebration of the New Year vary widely, and the evening preceding Chinese New Year’s Day is frequently regarded as an occasion for Chinese families to gather for the annual reunion dinner.

It is also traditional for every family to thoroughly clean their house, in order to sweep away any ill-fortune and to make way for incoming good luck. Another custom is the decoration of windows and doors with red paper-cuts and couplets. Popular themes among these paper-cuts and couplets include that of good fortune or happiness, wealth, and longevity. Other activities include lighting firecrackers and giving money in red paper envelopes.

According to ancient tales and hoary legend, the beginning of the Chinese New Year started with a mythical beast called the Nian during the annual Spring Festival. The Nian would eat villagers – especially children – in the middle of the night.

One year, all the villagers decided to go hide from the beast. An old man, Yanhuang, appeared before the villagers went into hiding and said that he would stay the night, and would get revenge on the Nian. All the villagers thought he was insane. The old man put red papers up and set off firecrackers.

The day after, the villagers came back to their town and saw that nothing had been destroyed. They assumed that the old man was a deity who came to save them. The villagers then understood that Yanhuang had discovered that the Nian was afraid of the color red and loud noises.

So the tradition grew that when New Year was approaching, the villagers would wear red clothes, hang red lanterns, and red spring scrolls on windows and doors. People also used firecrackers to frighten away the Nian. From then on, Nian never came to the village again. The Nian was eventually captured by Hongjun Laozu, an ancient Taoist monk. After that, Nian retreated to a nearby mountain. The name of the mountain has long been lost over the years

A reunion dinner (nián yè fàn) is traditionally held on New Year’s Eve, during which family members gather for a celebration. The venue will usually be in or near the home of the most senior member of the family. The New Year’s Eve dinner is very large and sumptuous and traditionally includes dishes of meat (namely, pork and chicken) and fish. Most reunion dinners also feature a communal hot pot as it is believed to signify the coming together of the family members for the meal.

Most reunion dinners (particularly in the Southern regions) also prominently feature specialty meats (e.g. wax-cured meats like duck and Chinese sausage) and seafood (e.g. lobster and abalone) that are usually reserved for this and other special occasions during the remainder of the year.

In most areas, fish (鱼; 魚; yú) is included, but not eaten completely (and the remainder is stored overnight), as the Chinese phrase “may there be surpluses every year” (年年有余; 年年有餘; niánnián yǒu yú) sounds the same as “let there be fish every year.” Eight individual dishes are served to reflect the belief of good fortune associated with the number. If in the previous year a death was experienced in the family, seven dishes are served.

Other traditional foods consists of noodles, fruits, dumplings, spring rolls (our reason for the post today!), and Tangyuan which are also known as sweet rice balls. Each dish served during Chinese New Year represents something special. For example, the noodles used to make longevity noodles are usually very thin, very long wheat noodles. These noodles are much longer than normal and are sometimes fried and served on a plate, or boiled and served in a bowl with its broth. Expectedly, the noodles symbolize the wish for a long life and are NEVER cut, as this implies cutting life short.

The fruits that are typically enjoyed on New Year would be oranges, tangerines, and pomelos as they are round and ‘golden’ color symbolizing fullness and wealth. Their lucky sound when spoken also brings good luck and fortune.

The Chinese pronunciation for orange is 橙 (chéng /chnng/), which sounds the same as the Chinese for ‘success’ (成). One of the ways to spell tangerine(桔 jú /jyoo/) contains the Chinese character for luck (吉 jí /jee/). Pomelo is believed to bring constant prosperity. Pomelo in Chinese (柚 yòu /yo/) sounds similar to ‘to have’ (有 yǒu), disregarding its tone, however it sounds exactly like ‘again’ (又 yòu). Dumplings and spring rolls symbolize wealth, whereas sweet rice balls symbolize family togetherness.

Red packets for the immediate family are sometimes distributed during the reunion dinner. These packets contain money in an amount that reflects good luck and honorability.

Now – as to spring rolls!

Spring rolls are a common appetizer in Chinese restaurants on the West Coast of the United States (the far thicker egg roll is the standard on the East Coast). Spring rolls in Cantonese are ‘chun geun’ (or ‘chun juan’, as it is known elsewhere in China) – ‘the roll of spring’. This is a highly-symbolic food to the Chinese, as the shape and color of a spring roll is reminiscent of a gold bar and is thus a harbinger of good fortune. It is synonymous with New Year’s Day and is enjoyed throughout the ensuing half-month celebration of the beginning of spring.

My version of the classic recipe is truly the spring roll of tradition – not the bastardized version served in Chinese-American restaurants. I choose to serve my spring rolls with not one but two sauces – a Worcestershire-based sauce that is very popular in Hong Kong and a chile-garlic sauce for a real kick! I strongly prefer Lan Chi brand Chinese chili sauce with garlic for this dipping sauce, you can buy it here.

Citizens, 2019 was a less than stellar year for the Mandarin of Might – I for one welcome the Year of the Metal Rat with open arms and a joyous countenance! I further take this opportunity to wish you and yours good fortune and good eating in 2020! Do try this with another classic Chinese New Year dish – Cantonese roast pig!