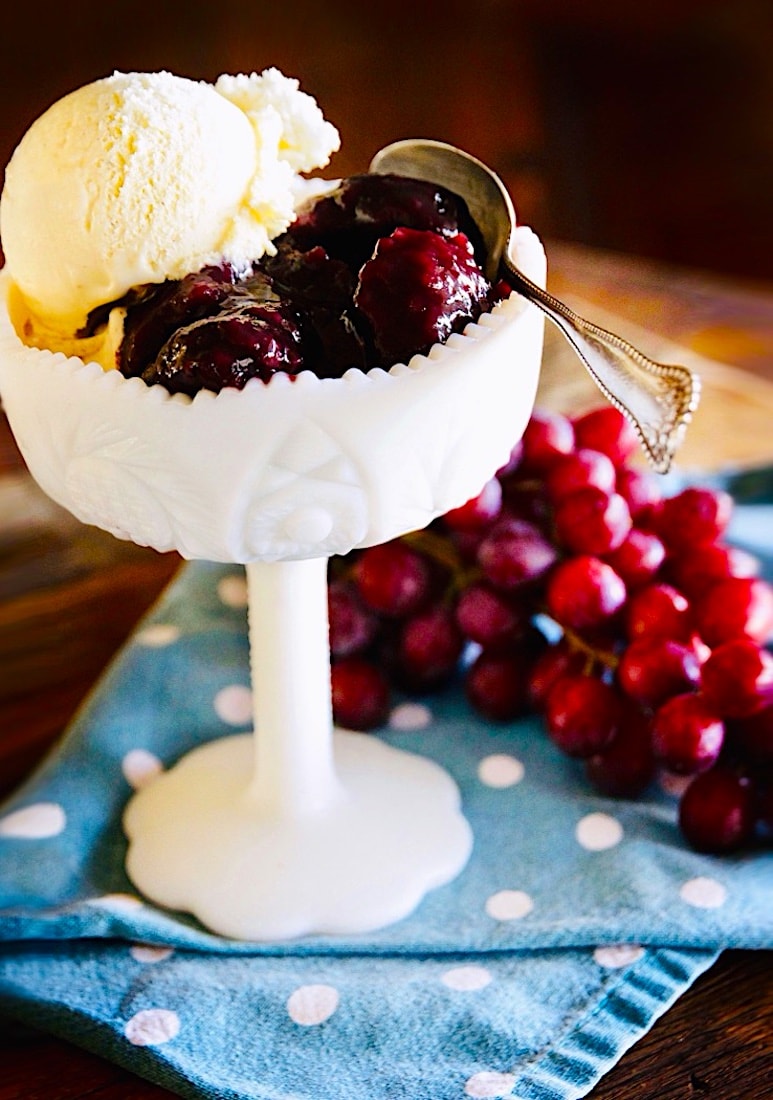 My Citizens, Autumn remains one of my two favorite seasons (Winter is the other – TFD does NOT suffer heat well) and as the weather cools, one very particular fruit comes into its brief, one-month season – I speak of nothing less than the Native American Scuppernong grape, also known as Purple Muscadine or ‘Possum’ grapes.

Indigineous to the U.S., what is quite possibly the oldest cultivated grapevine in the world is the 400-year-old scuppernong “Mother Vine” growing on Roanoke Island, North Carolina.

These grapes are the veritable definition of ‘grapey’ flavor, and the First Nation Cherokees enjoyed them a great deal after the first frost in September, when they turned sweet and delicious – and that time is NOW! So, allow the antiquarian who ALONE is TFD to share some history of the Cherokee with you and my version of this recipe!

The Cherokee are one of the indigenous people of the Southeastern Woodlands of the United States. Prior to the 18th century, they were concentrated in what is now southwestern North Carolina, southeastern Tennessee, and the tips of western South Carolina and northeastern Georgia.

A Cherokee language name for Cherokee people is Aniyvwiyaʔi (ᎠᏂᏴᏫᏯ), translating as “Principal People”. Tsalagi (ᏣᎳᎩ) is the Cherokee word for ‘Cherokee’.

By the 19th century, European settlers in the United States classified the Cherokee of the Southeast as one of the “Five Civilized Tribes”, because they were agrarian and lived in permanent villages and began to adopt some cultural and technological practices of the European American settlers.

Despite allying with the Americans against the British in the War of 1812 and having generally good relations with the fledgling U.S.A., the Cherokee were terribly mistreated after the War.

In 1838 and 1839, as part of Andrew Jackson’s Indian removal policy, the Cherokee nation was forced to give up its lands east of the Mississippi River and to migrate to an area in present-day Oklahoma. The Cherokee people called this journey the “Trail of Tears,” because of its devastating effects. The migrants faced hunger, disease, and exhaustion on the forced march. Over 4,000 out of 15,000 of the Cherokees died.

The Cherokee Nation has more than 300,000 tribal members, making it the largest of the 567 federally recognized tribes in the United States. In addition, numerous groups claim Cherokee lineage, and some of these are state-recognized. A total of more than 819,000 people are estimated to claim having Cherokee ancestry on the US census, which includes persons who are not enrolled members of any tribe.

Of the three federally recognized Cherokee tribes, the Cherokee Nation and the UKB have headquarters in Tahlequah, Oklahoma. The UKB are mostly descendants of “Old Settlers”, Cherokee who migrated to Arkansas and Oklahoma about 1817 prior to Indian Removal.

They are related to the Cherokee who were later forcibly relocated there in the 1830s under the Indian Removal Act. The Eastern Band of Cherokee Indians is on the Qualla Boundary in western North Carolina; their ancestors resisted or avoided relocation, remaining in the area.

Today, Cherokee (ᏣᎳᎩ ᎦᏬᏂᎯᏍᏗ, Tsalagi Gawonihisdi [dʒalaˈɡî ɡawónihisˈdî]) is an endangered to moribund Iroquoian language and the native language of the Cherokee people. Ethnologue states that there were 1,520 Cherokee speakers out of 376,000 Cherokee in 2018, while a tally by the three Cherokee tribes in 2019 recorded ~2,100 speakers.

His creation of the syllabary is particularly noteworthy in that he could not previously read any script. Sequoyah had some contact with English literacy and the Roman alphabet through his proximity to Fort Loundon, where he engaged in trade with Europeans. He was exposed to English literacy through his white father. His limited understanding of the Roman alphabet, including the ability to recognize the letters of his name, may have aided him in the creation of the Cherokee syllabary.

The number of Cherokee speakers is sadly today in intense decline – about 8 fluent speakers die each month, and only a handful of people under 40 are fluent. The dialect of Cherokee in Oklahoma is “definitely endangered”, and the one in North Carolina is “severely endangered” according to UNESCO. The Lower dialect, formerly spoken on the South Carolina–Georgia border, has been extinct since about 1900.

The dire situation regarding the future of the two remaining dialects prompted the Tri-Council of Cherokee tribes to declare a state of emergency in June 2019, with a call to enhance revitalization efforts. This call has only now just caught my attention and is why I have decided to post this particular recipe for you as a way to call attention to their plight!

Translating the name of this recipe was very difficult, given the limited number of native speakers and a paucity of information on the language that I could find. My translation of ‘Cherokee Grape Dumplings’ is ᏣᎳᎩ ᏖᎸᎳᏗ ᎠᏑᎨᏙᏗ – ‘Cherokee Grape Pan of Dough’ – it’s not perfect, but close enough for a native speaker to get the gist of it.

My recipe is basically one that I found on the excellent website globaltableadventure.com, but with two key changes. First, to add some additional complexity to the flavor and to offset some of the intense sweetness, I have called for some Black Walnut extract – Eastern Black Walnut being a native to the original Cherokee lands and a tree they utilized for food and medicine alike. You can buy a natural brand without artificial flavors here.

Second, rather than using just any old grape juice, I have called for the original grape the Cherokee used – the Scuppernong. It’s only in season this month, as previously mentioned, but I have mercifully found a source that ships during September – grab them while you can here! If you’re reading this out of season, I recommend using 100% Concord Grape juice – my personal favorite is this brand.

Citizens, the Cherokee First Nation has been ill-treated by our ancestors and while nothing can make up for their loss, I shall do all I can to call attention to their noble history, culture and cuisine! Please do try this seasonal and very easy recipe today – it pairs very nicely with this recipe for Cherokee huckleberry bread!