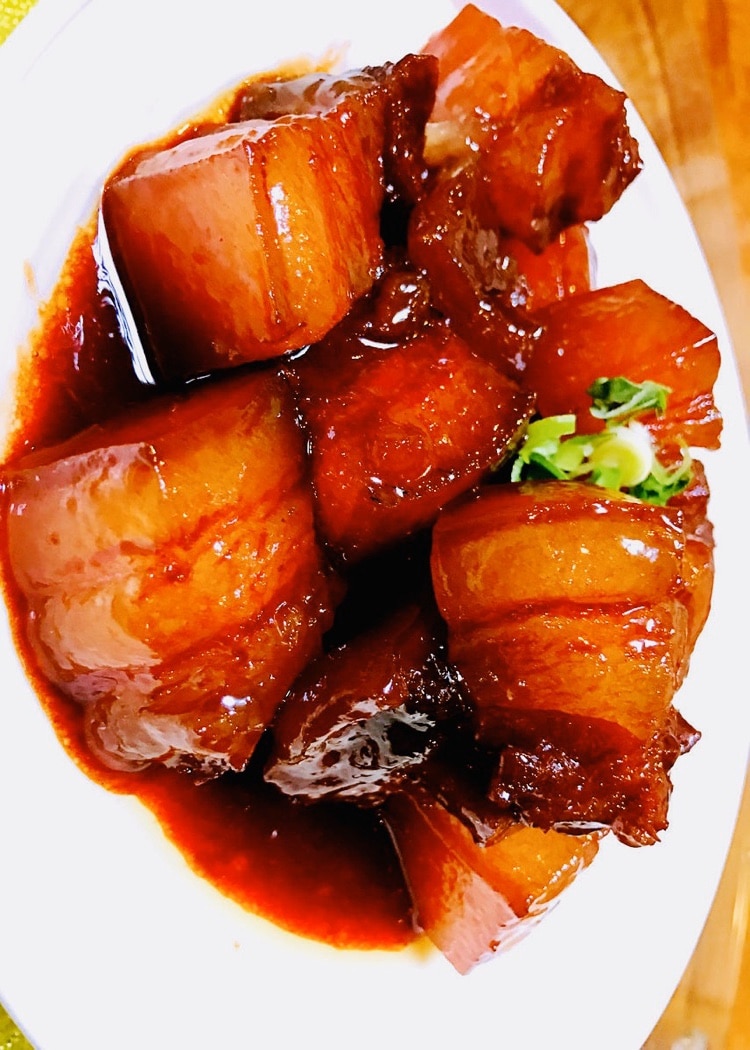 Citizens! The fervor of revolutionary zeal has reached a fever pitch here at the hidden lair of the Beloved Leader – YOUR TFD! – as I prepare my latest recipe for the superlative members of TFD Nation! In the long history of humankind, there are few recipes indeed that claim the iron-fisted imprimatur of a world leader – especially one with the checkered history of the Great Helmsman himself, Chairman Mao Zedong!

Red braised pork belly or hong shao rou (红烧肉 – hóngshāoròu) is a classic pork dish from mainland China, red cooked using pork belly and a combination of ginger, garlic, aromatic spices, chili peppers, sugar, star anise, light and dark soy sauce, and rice wine. This was – by far – the favorite recipe of Mao, who ate it literally every day as he claimed the fatty savor of red braised pork belly helped him maintain intellectual superiority against his enemies!

The pork belly is cooked until the fat and skin are gelatinous, soft, and melt easily in the mouth, while the sauce is usually thick, sweet and fairly sticky. The dish has a melt in the mouth texture that is formed as a result of a long braising process, during which the liquid reduces and becomes thick. It is generally served with steamed white rice and dark green vegetables.

Many Chinese provinces have slightly different versions, but the Hunanese one (often called “Mao’s family style red braised pork” (Chinese: 毛氏紅燒肉; pinyin: Máo shì hóngshāoròu)) is served at the many Hunan restaurants across China specialising in so called “Mao-style cuisine”.

As noted in an article from telegraph.co.uk:

In Mao’s home province of Hunan, much of the Great Helmsman’s success has been credited to his fondness for hong shao rou (red braised pork) cubes of braised pork belly glazed with caramelised sugar and Shaoxing rice wine. The dish is widely regarded as the “brain food” which provided Mao with the wits to defeat his enemies.

Now the local government in Hunan has sought to standardise the cooking of the dish, in order to stem the tide of imitations that crowd Chinese restaurants.

According to stringent instructions from the government’s food quality supervision and testing institute, true hong shao rou can only be made with the meat of rare pigs from Ningxiang county. Officials have designated the pig, which has been bred for nearly 1,000 years, as an “agricultural treasure”.

The Xiaoxiang Morning Herald, a local newspaper, said that three other dishes, including stir-fried peppers with pork, steamed pork with pickled cabbage and steamed fish head with peppers, had also been codified in the official recipe book. Restaurants which do not follow the correct procedures will not be allowed to title themselves as “authentically” Hunanese, said the guidelines.

“These rules are great. I’m pleased my home province can offer standards to all Chinese people for reference,” said one Hunanese native, named only as Mr Hu, to the newspaper.

Hunan has not been shy in cashing in on Chairman Mao’s fame. Last month, a 100-foot tall statue of Mao as a young man was unveiled in Changsha, while earlier this month the local tourism bureau proposed the designation of December 26, Mao’s birthday, as a new national holiday.

Red-colored meats are eaten for good luck because red is the color of fire, a symbol of good fortune and joy – plus the obvious Communist color symbology as well.

My version of this supremely succulent recipe hews closely indeed to tradition – there are, of course sprinklings of TFD seasoning magic throughout the ingredients and I am fully confident traditionalists will applaud my version! One slight deviation (totally optional) is that I incorporate a bit of the Eastern Chinese version of the recipe with my use of Chinese black vinegar – feel free to omit it if you so choose. You can buy an excellent-quality product here.

You MUST use skin-on pork belly for this recipe – if you can’t find it, don’t make it. Simple as that! I prefer to use the milder Ceylon cinnamon in this recipe, you can buy it here. Chinese yellow rock sugar is a needed ingredient here, as it adds an unmatched gloss to the sauce – you can buy some here.

Dark soy sauce is NOT the same as regular soy sauce, I prefer to use the mushroom-flavored version that you can buy here. Shaoxing (Chinese rice wine) of decent quality can be purchased here. Lastly, you will need red fermented tofu which is a key flavor profile and color ingredient for this dish – you can’t leave it out, but you can easily buy it here.

Citizens, this is truly one of the great (and certainly amongst the richest!) dishes in the entire Chinese gastronomic canon – I hope you enjoy it as much as I do! 🙂 This would be an outstanding dish to serve with some delicious hot and sour soup from neighboring Sichuan province!