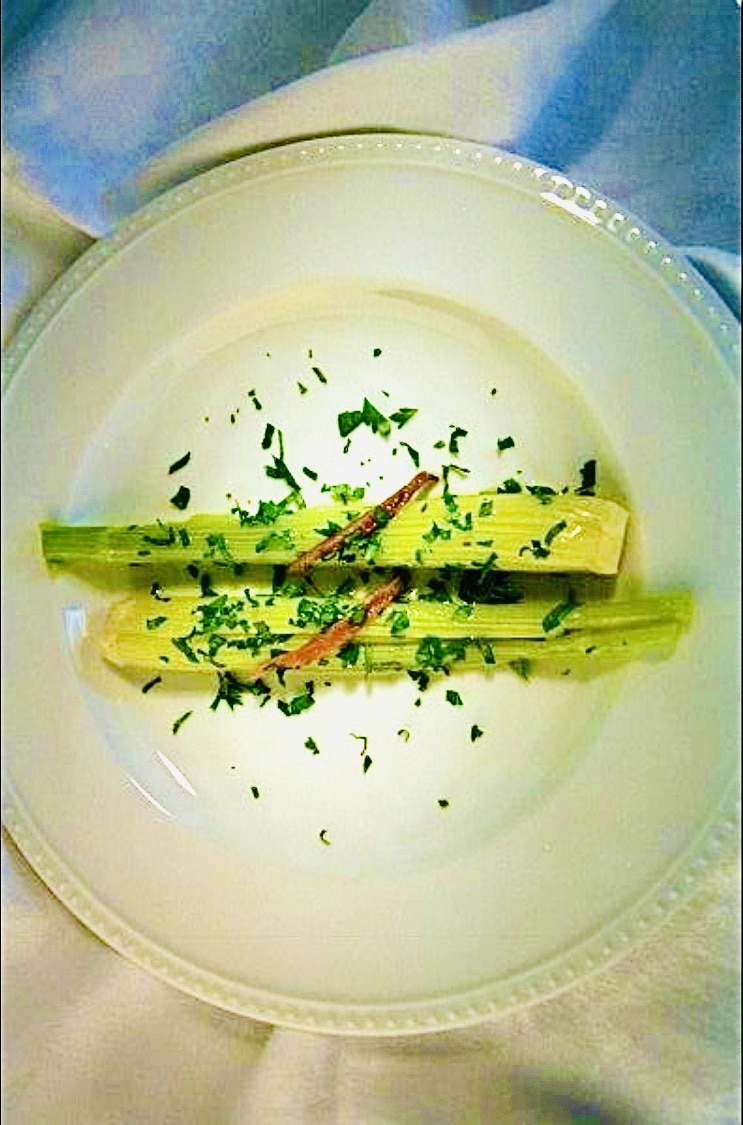 My Citizens, a confluence of recent events have simultaneously aligned for the Hetman of History, YOUR TFD – while self-isolating due to the pandemic, I find myself with an unexpected plethora of celery. This is not one of my most favorite vegetables, usually only used by me in tuna salad, Cajun recipes or in a stock. However, a dim memory suddenly sprang to electric brilliance in my cavernous cranium – a very old recipe from the early 20th century from right here in San Francisco for Celery Victor!

This recipe hits all my preferred powerful flavor notes and is nearly lost to time – a pity as it is truly delicious! Allow me to take this recipe off life support and return it to the ivory pedestal it once occupied in high society, Citizens!

The dish, an “American classic”, was popularized by author Clarence Edwords in his 1914 book, A Bohemian Guide to San Francisco Restaurants (a copy of which occupies a place of honor in TFD’s culinary library!).

To prepare, celery hearts are simmered in a veal, chicken, or beef stock, chilled and served with a thickly-emulsified tarragon vinaigrette and a garnish of celery leaves and served as a flavorful first course.

As noted in a fantastic article in the LA Times back in 1988:

There was a time when California cuisine did not mean goat cheese, grilled anything, baby produce and the rest of today’s trendy ideas.

In the past, some remarkable cooking took place in this state, dishes virtually forgotten in the contemporary rush toward smart new foods.

Now homage is being paid afresh to a chef of the past, a man whose taste and innovations established dining style in San Francisco in the first quarter of this century. He is the late Victor Hirtzler, legendary chef of the Hotel St. Francis and creator of such classics as Celery Victor and Peach Melba.

Born in Strasbourg in northeastern France, Hirtzler cooked there and in Paris, served as taster for Czar Nicholas II and as chef de cuisine to King Don Carlos of Portugal. Migrating to the United States, he found work at the Waldorf Astoria in New York. There he was discovered by James Woods, who had been named manager of the luxurious hotel that was being constructed on Union Square in San Francisco.

Bon vivant and companion to celebrities and society, the flamboyant Hirtzler was dedicated to his craft. In 1910, he produced a cookbook, “L’Art Culinaire, Hotel St. Francis Book of Recipes and Model Menus,” with wealthy San Francisco socialites as sponsors of the first privately published edition.

The recipes from this book formed the basis of a much larger work, the “Hotel St. Francis Cook Book,” which was published in 1919.

Citizens, this is by no means a difficult recipe and it calls for no outré ingredients, making it ideal for cooking from your pantry during COVID-19.

I have made a few changes to the recipe, per my norm – the edits as always are notes in the instructions. Anchovy is a crucial part of the flavor profile for this dish – I only endorse this brand.

Enjoy this memory from a bygone age and surprise your family with celery as a delicious vegetable/salad/first course today!