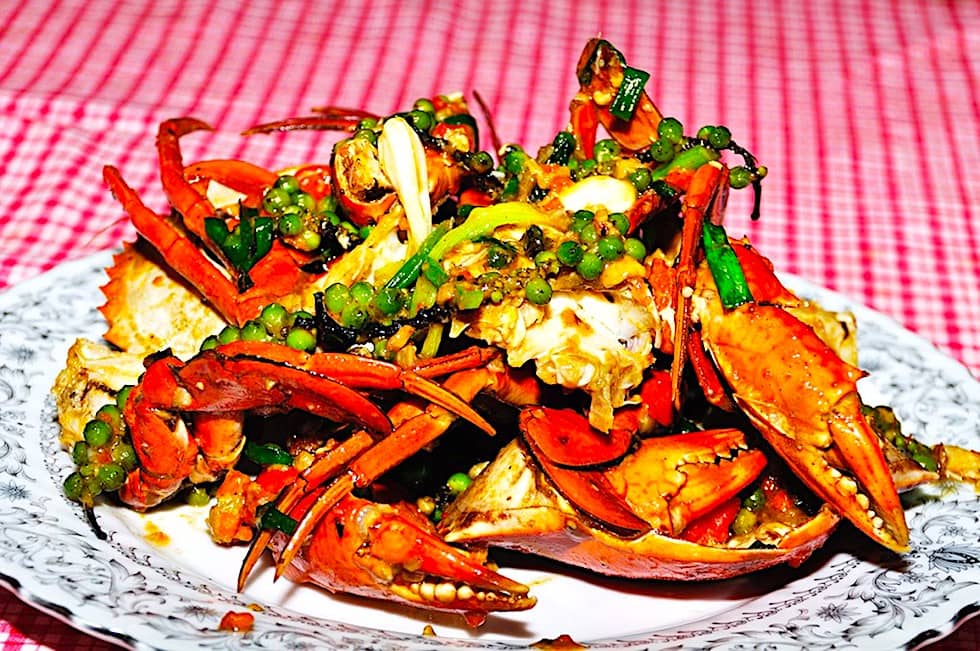 Citizens – you may not be aware that the exotic country of Cambodia is also the home to the world’s finest peppercorns! 😀

Kampot pepper is a cultivar of pepper (piper nigrum) grown and produced in Kampot Province, Cambodia. It is a certified appellation of origin product since 2010.

Kampot pepper is organically grown and produced and sold in green, black, white and red varieties, all from the same plant. The climate of Kampot Province offers perfect conditions for growing pepper and the quartz content of the soil in the foothills of the Elephant Mountains helps to give Kampot pepper its unique terroir.

Plantations are inspected by the Kampot Pepper Producers Association (KPPA) and by the independent certification body Eco-Cert. Only accredited members of the KPPA, adhering to the PGI criteria, are authorised to sell pepper using the “Kampot Pepper” appellation of origin. In 2015, a year of drought, the production amounted to 50 tonnes and it is expected to increase to 500 tonnes in 2018.

Kampot pepper cultivation has a long history and was first described in the 13th century, during the Angkorian era, when the Chinese diplomat Zhou Daguan visited the area. Modern intensive production was initiated under the French colonial rule in the 1870s and at the beginning of the 20th century, Cambodia harvested around 8,000 tons of Kampot pepper annually.

In the 1960s, there were still 1 million pepper poles in Kampot, producing around 1,000 tons per year, but the production was severely affected by the Cambodian civil war and only 4 tons per year were harvested by the end of the 1990s.

Kampot pepper production slowly gained momentum in the 2000s when previous pepper farmers gradually returned to their lands. As of July 2015, six districts in the southern province of Kampot have pepper farms, while the spice’s overseas market consists mostly of Europe, the United States, Japan, Korea, and Taiwan.

As the first Cambodian product, Kampot pepper obtained the World Trade Organization’s Geographical Indication (GI) status in 2010, tying the quality of the product to its origin.

International demand for the product has risen since then. However, annual export volume is still relatively small, i.e. 58 tonnes was produced on 25 hectares for the year 2014.

Apart from the peppercorns, the stalks of Kampot pepper are also eaten, as in Kep, Cambodia where they are pan fried with squid at the Crab Market.

This particular recipe calls for both green and black Kampot peppercorns, but since the green are still not available in cans in this country, I specify Madacascan green peppercorns in the can, available from Amazon here.

You can buy the black peppercorns from Kampot here.

This is a simple and delicious recipe – I hope you enjoy it as much as I do, ! 😀