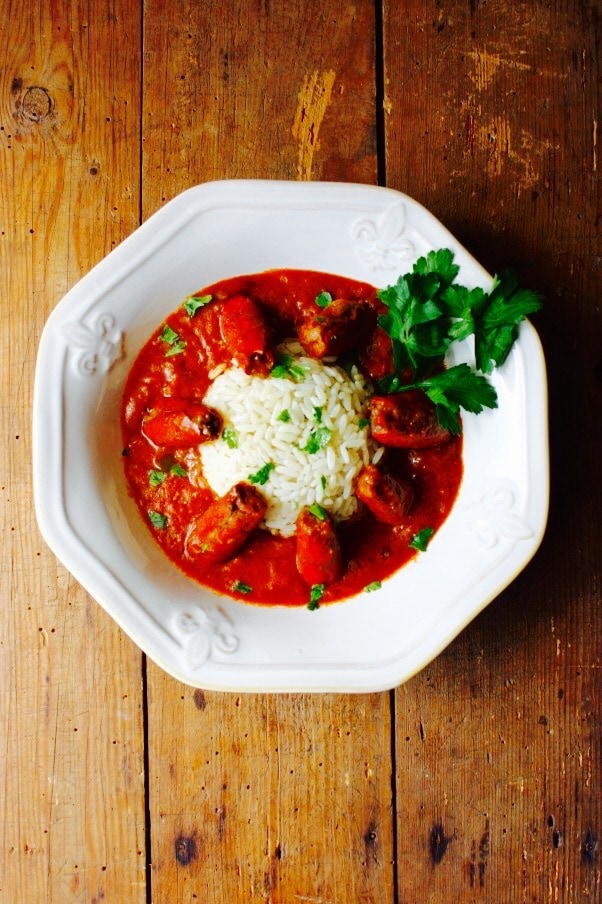 Citizens, New Orleans has perhaps the finest cuisine of any to be found in the United States and Crawfish Bisque is perhaps the ultimate expression of Accadian savor! 🙂

I found this wonderful historic description of crawfish eating in Louisiana at the Greater Baton Rouge Business Report:

Our tail-pinching, head-sucking love of crawfish might be a little odd, but it’s not new, as writer Sam Irwin explains in his latest work. Irwin was raised in Breaux Bridge, in the cradle of Louisiana crawfish culture. His grandfather, Joe Amy (pronounced ah-mee), was an industry pioneer, dealing crawfish from Amy’s Fisheries in Henderson as early as 1932. Louisiana Crawfish is available online from The History Press, and at better bookstores and bait shops.

The French settlers came here with the culture of eating crawfish; it was something they ate back in Europe. During the colonial period, there would be crawfish ponds behind plantation homes and things like that. Some of the early European settlers might have learned it from the Native Americans.

There are numerous references in newspapers to eating crawfish, starting in the 1890s. It was in the society pages. If you wanted to impress someone, you served crawfish. In 1932, there was a film made in Louisiana based on Evangeline: A Tale of Acadie, by Henry Wadsworth Longfellow. A state lawmaker hosted a premiere event, inviting dignitaries from Canada and around the state, and they served a crawfish bisque for 500 people on the banks of Bayou Teche in Breaux Bridge.

I think possibly some stigma may have been attached when the oilmen moved in; the rise of the crawfish business coincided with the rise of the oil industry in Louisiana. New arrivals probably said something like, “Oh, you eat that?” The Cajuns may have felt some embarrassment, but that didn’t stop them from eating crawfish.

The area near West End used to develop little ponds of water that were perfect habitats for crawfish, and a lot of people made extra money catching crawfish, crabs or shrimp. But by 1922, people started having to move farther and farther out, as far as Gentilly. Neighborhoods were being built, which changed the habitat.

By the 1950s and 1960s, restaurants were featuring them, and peeling plants for the restaurants were built in places like Henderson, Catahoula and Pierre Part. By the mid-1960s, crawfish had supplanted fish as the major industry of the Atchafalaya Basin.

When I-10 opened, suddenly almost 20,000 cars a day were passing Henderson. In the 1970s, aquaculture researchers started learning how to build crawfish ponds. Rice farmers really got involved during the 1980s when the price of rice dropped. The Crawfish Festival was a marketing force from 1960 until about 1984; this Breaux Bridge club put on a big party and had fun promoting the fact that they ate this funny little animal. They got press from all of the major networks.

Market forces and weather vary. We had three harsh cold spells this winter, and crawfish don’t move much in cold water. You can find them as early as November, but not everyone starts fishing or flooding their ponds that early. The Basin crop doesn’t really come in until the weather is good and warm in March or April. If the price of rice goes up, farmers might not raise as much crawfish. If the Chinese begin eating a lot of peeled crawfish, they might not export as much. So the crawfish story is being rewritten every year.

This bisque is universally considered one of the most complex recipes in the New Orleans recipe repertoire, especially the version that uses fried stuffed “heads” (actually the bodies).

My version uses a few high-end touches like cognac, a bit of roasted garlic and tarragon, but is otherwise a classic version of this most delicious of New Orleans soups! Please only make this if you can get fresh (or even better – live!) crawdads. You can order them from here.