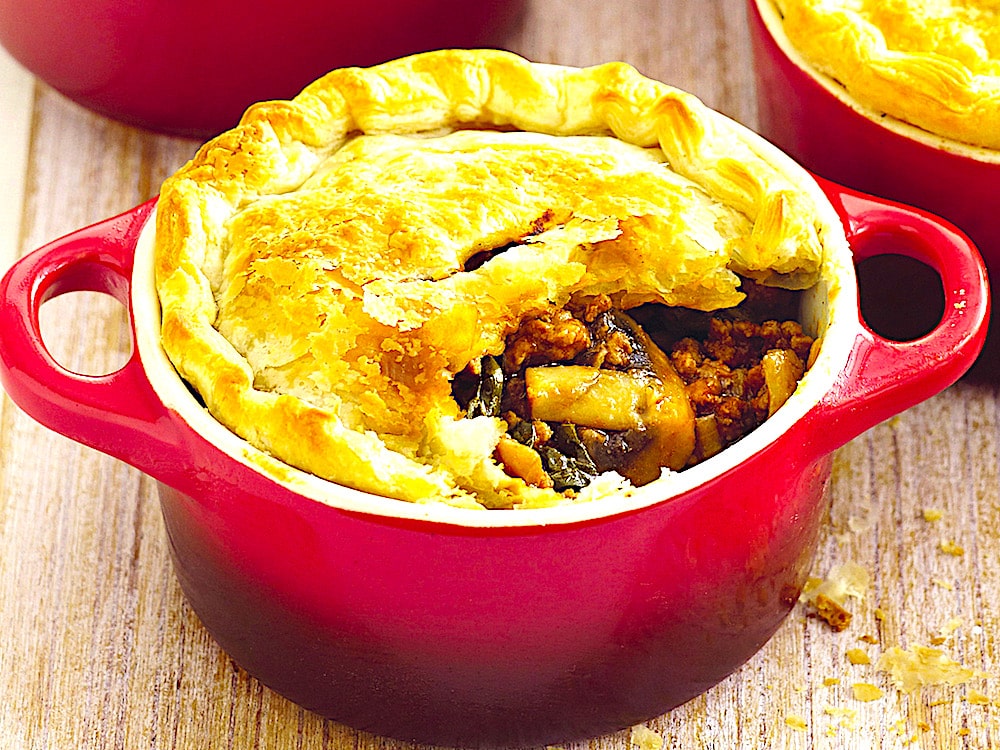 Citizens, the Imperial Majesty that is TFD wishes his fellow Royals Harry and Meghan Markle every imaginable happiness in their new lives together! To celebrate their nuptial bliss, I am proud to share that most quintessentially British recipe with you for steak and kidney pie!

The gravy typically consists of salted beef broth flavored with Worcestershire sauce and black pepper, and thickened with refined flour, beurre manié, or corn starch. The gravy may also contain ale or stout. Hot water crust pastry, puff pastry, and shortcrust pastry are among the pastry crusts prepared for steak and kidney pie.

Among the various vernacular rhyming slang names for steak and kidney pie are Kate and Sidney pie, snake and kiddy pie, and snake and pygmy pie.

Be it steak and kidney or a proper pork pie, the Great British pie is Britian on a plate. As simple as your favourite pies may seem, they have a rich history that traces back to the Neolithic Period, around 9500 BC.

Pie-like dishes have been around since the ancient Egyptians, but the idea of enclosing a filling inside a sort-of-pastry made from flour and oil actually originated in ancient Rome. The first published recipe featured rye dough filled with goat cheese and honey.

The pie we know and love today has its roots in Northern Europe. Back in the day, olive oil was harder to come by and butter or lard were the fats of choice in the colder areas north of the Mediterranean. The use of these solid fats created a pastry that could be rolled and moulded – and so the true pie was born!

The early “pyes” were of course predominately meat pies. In the 12th century, the need for nutritious, satisfying, long-lasting food that was easy to store and carry, particularly at sea, was initially solved by taking livestock along with a butcher or cook. Needless to say, the ships quickly became pretty cramped, so a solution was found – a crust. The hardened pastry containers were not really eaten at first – think of them as disposable medieval Tupperware that kept the meat filling fresh.

Missionaries and explorers spread the meat-based pie dish across the globe. The English Pilgrims of the North American colonies brought the recipes across the ocean with them. The crust of the pie was useful to preserve food during the long winter months in America.

The pie was not actually not very popular in America until the 1800s, and today meat pies have lost their popularity to be replaced with sweet pies. Fruit pies had made their very first appearance in the late 16th century, when Queen Elizabeth I was served the first cherry pie.

Citizens, I am very proud of my particular recipe as it is sumptuous beyond words and totally authentic as well! The eccentric but delicious touch of Gentleman’s Relish (an anchovy and butter spread) adds a hint of umami – trust me, you won’t taste any anchovy in this! 🙂

I also call for the extra steps (rarely if ever done, sadly) of cutting out the cores of the kidneys and leaching them overnight. This prevents any hint of gaminess and “other unwanted flavors”. 😉