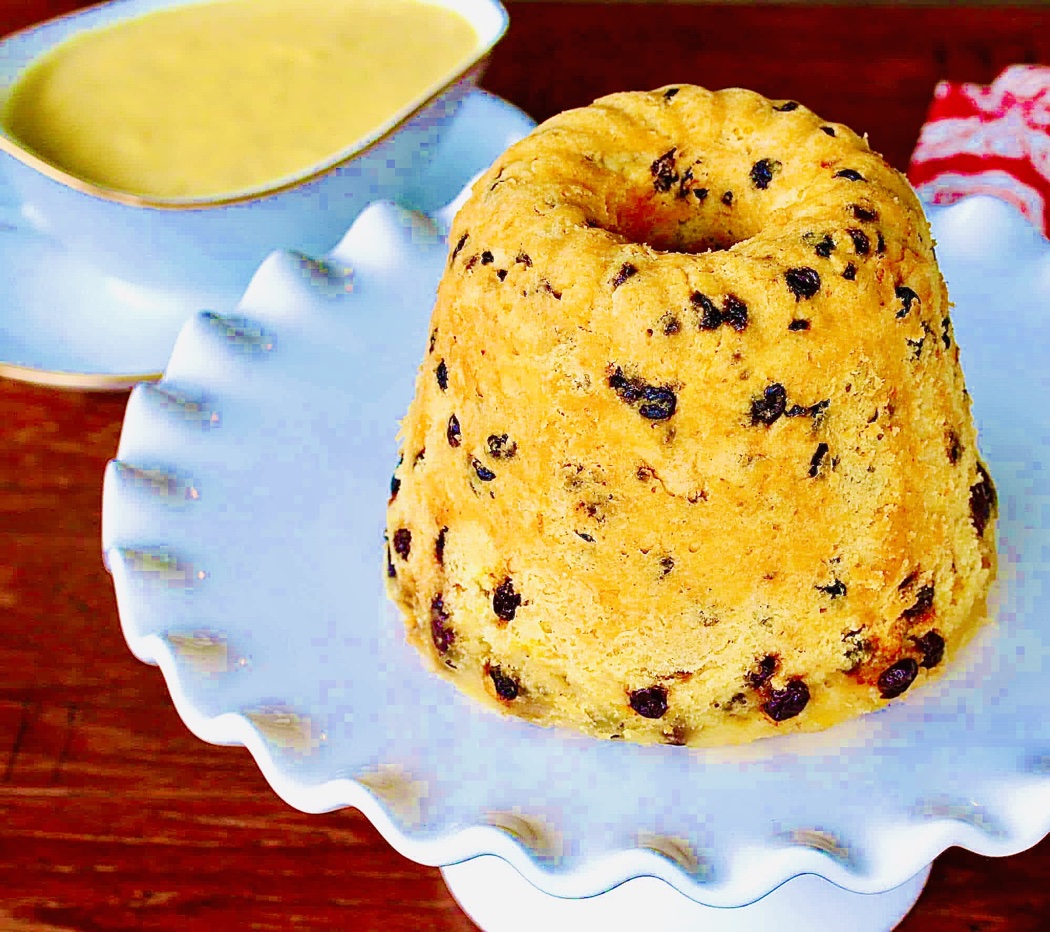 My Citizens, today is the second installment of our series of posts on ‘British recipes with odd names’ with the O.G. of strangely-named dishes – I speak of nothing less than the infamous and unnecessarily maligned dessert that is spotted dick!

Yes, people of all ages have been sniggering about this name for literally centuries – but American English hilarity aside, the etymological truth is far more sanguine than might otherwise be assumed. Allow the Mufti of Magnificence, the Emir of Etymology – YOUR TFD! – to show you the one true path of gastronomic history and one hell of a delicious recipe to boot!

Mentioning this pudding to people unfamiliar with British food always generates great amusement. Its etymology is indeed the culprit, though an entirely innocent explanation can be provided: ‘dick’ is simply an old dialect pronunciation of ‘dough’, just like ‘duff’ in plum duff. Spotted dick (also known as “spotted dog” or “railway cake”) is a traditional British pudding, traditionally made with suet and dried fruit (usually currants or raisins) and often served with custard.

While “spotted” is a clear reference to the dried fruit in the pudding (which resemble spots), “dick” and “dog” were dialectal terms widely used for pudding, from the same etymology as “dough” (i.e., the modern equivalent name would be “spotted pudding”). In late 19th century Huddersfield, for instance, a glossary of local terms described: “Dick, plain pudding. If with treacle sauce, treacle dick.”

The dish is first attested in Alexis Soyer’s The modern Housewife or ménagère, published in 1849, in which he described a recipe for “Plum Bolster, or Spotted Dick. The name “spotted dog” first appeared in 1855, in C.M. Smith’s “Working-men’s Way in the World” where it was described as a “very marly species of plum-pudding”. This name, along with “railway cake”, is most common in Ireland where it is made more similar to a soda bread loaf with the addition of currants.

The Pall Mall Gazette reported in 1892 that “the Kilburn Sisters … daily satisfied hundreds of dockers with…Spotted Dick” – proof that by the 19th century, double entendres using this name were already in mainstream use (one might argue that this was indeed subtly calling out the Killburn Sisters as whores and the dock workers as having venereal disease – or perhaps that is just the sick mind of TFD at work…).

The name has indeed long been a source of amusement and double entendres; reportedly restaurant staff in the Houses of Parliament decided to rename it “Spotted Richard” so it was “less likely to cause a stir”.

There is a long and proud history in Britain of comparing the term ‘pudding’ to the male genitalia (sorry, bad pun), as noted in this fascinating article from inews.co.uk:

‘Pudding’ comes from the Middle English ‘poding’ and the Old French ‘boudin’, both of which mean a sausage, so it should come as absolutely no surprise that ‘pudding’ has been common slang for the penis since at least the fifteenth century (Green, 2010); as this jolly song attests:

for he may helpe me at my need

Therfore I pray you now let me spede” (succeed)

“Merry Dialogue between a Maid and her Master” (1674) tells how the master gave the maid ‘a breakfast as she did it call. He gave her a pudding, but that was small’.

Thomas D’Urfey goes even further in 1682 and complained that too much sex ‘left little more than the skin of his pudding’, and John Cooke made jokes about ‘insatiable women, whom two puddings would not satisfy’ in 1611.

But penises don’t have it all their own way. ‘Pudding’ as slang for the vulva dates to at least 1535, when J. Bale Comedye wrote about eating “durty puddynges”.

In 1681, ‘The Old Pudding-Pye Woman’ writes that “If any young man have a mind to such a rare prize, / He shall have her Daughter and all her Pudding-pyes.”

Whilst we might understand why “pudding” would mean a penis (it looked like one), quite why vulvas got in on the act is less clear.

Nowadays, the pudding is sold in tins all over the country, a reminder of how the English searched for a way to have their puddings without having to spend the time making them! It was in fact as a child in NYC that I first spotted a tin of this in some random supermarket and embarrassed my parents by falling to the ground in sheer hilarity. Yes, TFD as a child (and adult) was/is possessed of a mighty sense of childish humor in every aspect imaginable. 😉 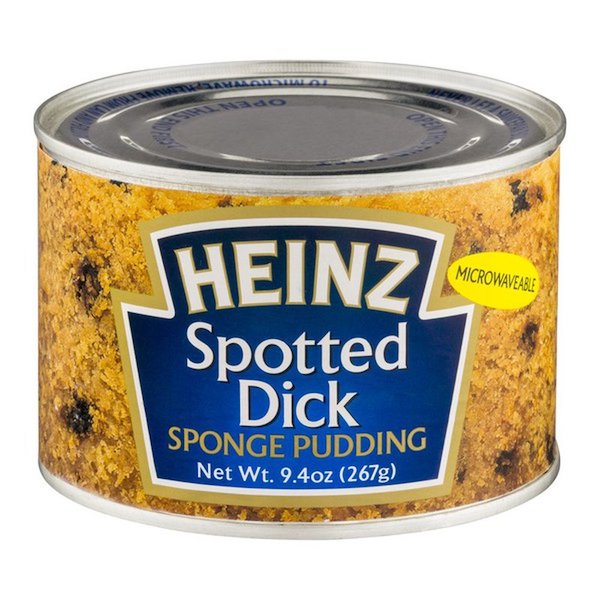 Spotted dick was also a popular school-dinner pudding; many people who were young in the sixties and seventies will remember them well, all covered in custard. Any self-respecting Brit would always serve this with Bird’s Custard, a popular brand of instant custard in the UK. Being TFD – I eschew this in favor of making it with a proper custard, one straight from the 18th century!

My version – of course – demands that it be made ONLY with proper suet, aka beef fat. It adds a richness that cannot be obtained by any other fat – I only recommend this brand, which is used in the UK. It is shelf-stable and can be used in many other recipes, including the only proper way to make a Yorkshire Pudding! I also call for turbinado sugar (known as demerara sugar in the UK), which has a touch of molasses still in it and makes for a better pud’, IMHO. Buy my preferred brand here. Currants, which are somewhat like a better-flavored raisin, are easily available here.

One change I’ve made to the classic recipe may not be greeted well by staunch traditionalists, but I find adding a small amount of coconut oil sits very nicely indeed with my palate – you can simply leave it out and replace it with an equal amount of beef suet if you are so inclined. Lastly, you’ll want a proper pudding mold – this one is nice.

Citizens – this dish may be oddly-named to modern sensibilities, but it is a recipe with at least a century of provenance and it is supremely delicious to boot! Keep the chuckles to a minimum and follow my lead – sally forth and enjoy this delightful British recipe forthwith! To close this post in the proper spirit of double entendre that is endemic to this dish, I’d personally serve it at the close of a classic British dinner – with roast pork as the main dish! 😉