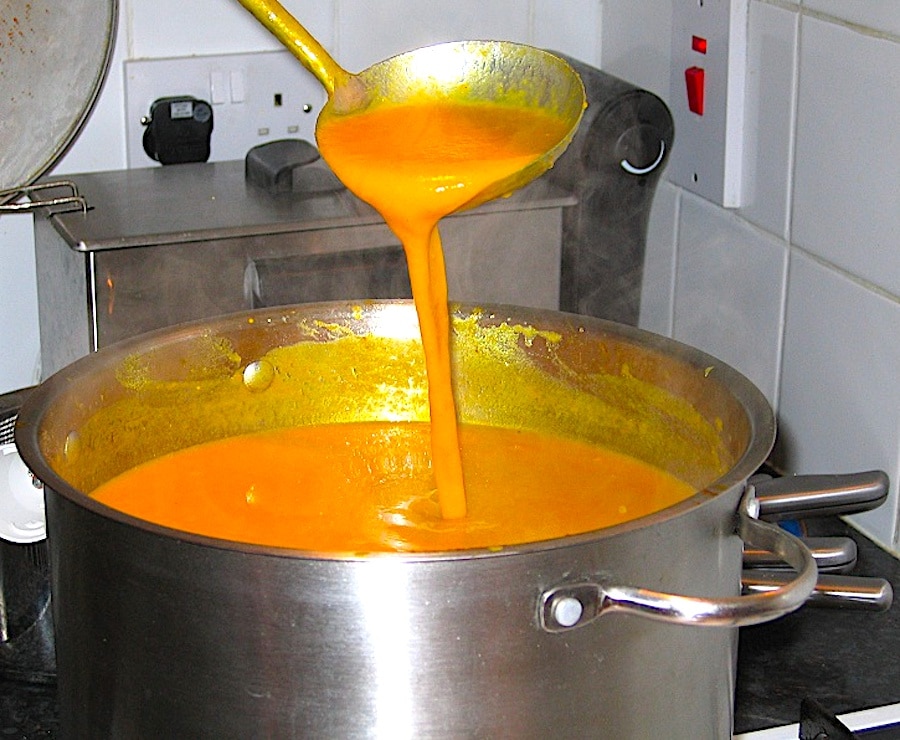 Curry Base Image Used Under Creative Commons License From curry-recipes.co.uk

My Citizens – the Maestro of Magnificence, the Suzerain of Spice – YOUR TFD was privileged to join one of my closest friends from the UK for a proper curry dinner last night, where he regaled his wife and me with stories of his 20-year quest to find good British curry in the States.

We are both huge fans of British Indian Restaurant (BIR)-style curries, which are very different from Indian curries. There is a unique texture and flavor profile found in BIR curries that are the result of an amalgamation of British and Indian taste sensibilities that I find intoxicating. It all comes down to the classic curry ‘base’ that is the foundation of all good British-style curries!

Since it is so difficult to find real BIR curry or curry base here, I have taken on the yoke of responsibility to teach you how to do it as well as anything you’d find in the UK!

As noted in this great (excerpted) article from NPR:

The modern British curry house, however, has working-class origins. And a very narrow lineage. More than 80 percent of curry house owners in the UK can trace their roots back to Sylhet, a city in the east of what is now Bangladesh, Collingham explains in Curry.

Sylhet’s waterways were key to trade during the Raj, hundreds of Sylhetis ended up working on British steamships. “They often had the horrible jobs of working in the engine rooms,” Collingham says. “So quite a lot of them tended to jump ship.”

They had a tough time finding work in England, and many of them ended up in restaurant kitchens. “Some of these immigrants saved up enough money to then open their own restaurants,” Collingham says. In the 1940s, they bought bombed-out fish-and-chip shops, selling curry and rice alongside traditional British favorites.

Many of these immigrant restaurateurs were self-taught, Collingham says. “They’d copy the menus from existing Indian restaurants because they know that’s what sells.”

And that is why, nowadays, you can wander into pretty much any curry house in any part of the United Kingdom, “and you can have a vindaloo or a korma or a chicken tikka,” Collingham says. “That’s what the customers expect and so that’s what they get.”

In 2001, the UK’s foreign secretary, Robin Cook, said that chicken tikka masala is a “a true British national dish,” epitomizing “multiculturalism as a positive force for our economy and society.”

The story goes that a British customer at a curry house complained that his marinated, baked chicken was too dry. So the chef mixed up some canned tomato soup with yogurt and spices to create a sauce. Glasgow, Birmingham, Manchester and Leicester all lay claim to its invention. In any case, chicken tikka masala was a hit. “For a while it was the most common dish ordered in England,” Collingham says.

“It’s nothing like what you’d find in India,” says Syed Belal Ahmed, who runs the trade publication Curry Life Magazine. “But I don’t see anything wrong with that.”

British curry isn’t a dish but a cuisine, Ahmed says — a distinct cuisine that’s a testament to the innovation of Indian immigrants in the UK. A British curry house menu may feature an Anglicized korma (featuring South Indian flavors) alongside rogan josh (originally a Kashmiri dish).

Naan — which traditionally was only consumed in Iran and parts of north India — is a staple at the British curry house. “And all of these dishes are inspired by Indian dishes, but they’ve developed into something different in this country,” Ahmed says.

Take Balti, for instance — a style of curry that gets its name from the steel bowls in which it is served. “Balti is a cuisine from a region of Pakistan, from the Northeast frontier,” Ahmed explains.

But British Balti is something else altogether; it’s an approach to cooking invented by Pakistani restaurateurs in Birmingham that involves quickly assembling together pre-cooked meats with pre-made curry sauce, to serve the hungry hoards of Britons queuing up for a post-pub nosh. As Collingham writes in her book, it “unashamedly makes a virtue of restaurant shortcuts.”

There are 4 quintessentially BIR curries, IMHO – the most popular is Chicken Tikka Masala, and I have already posted a recipe for it. The other 3 range from very mild to so spicy it will literally strip paint from the wall if you breathe on it – in order, these are Korma, Madras, and Phall. Over this and the next 3 posts, I will teach you how to properly make each one using curry base so that even the most finicky UK citizen will proclaim you to be an honorary Brit. 🙂

The key to all BIR curries is two-fold: the curry base, which serves as the foundation of the sauce for most of them; and the pre-cooking of the meats. Between these two shortcuts and armed with the proper finishing spices for each specific dish, a restaurant can serve any delicious curry on its menu within 15 minutes!

First – you should read this tutorial in its entirety – it will start you on the one true path to BIR nirvana! This author really knows their stuff and I simply can’t improve on their techniques and instructions when it comes to curry and the base.

Now that you’ve done that, I will teach you how to make my version of curry base, which will serve as the foundation recipe for the next few posts! It is – unsurprisingly – a more complex version of the curry base used in most curry houses, using Indian Akhni spiced broth instead of just plain water.

Be advised that this makes a LOT of base – but the good news is that it freezes perfectly. Once you’ve gone to the trouble of creating the curry base, you can literally have dinner on the table in 15 minutes and in near-infinite variety by varying finishing spices and meats.

Citizens, I hope you find this a wonderful taste of home if you’re a British ex-pat – and even if you’re not, this curry base will become a go-to recipe for you, I promise!