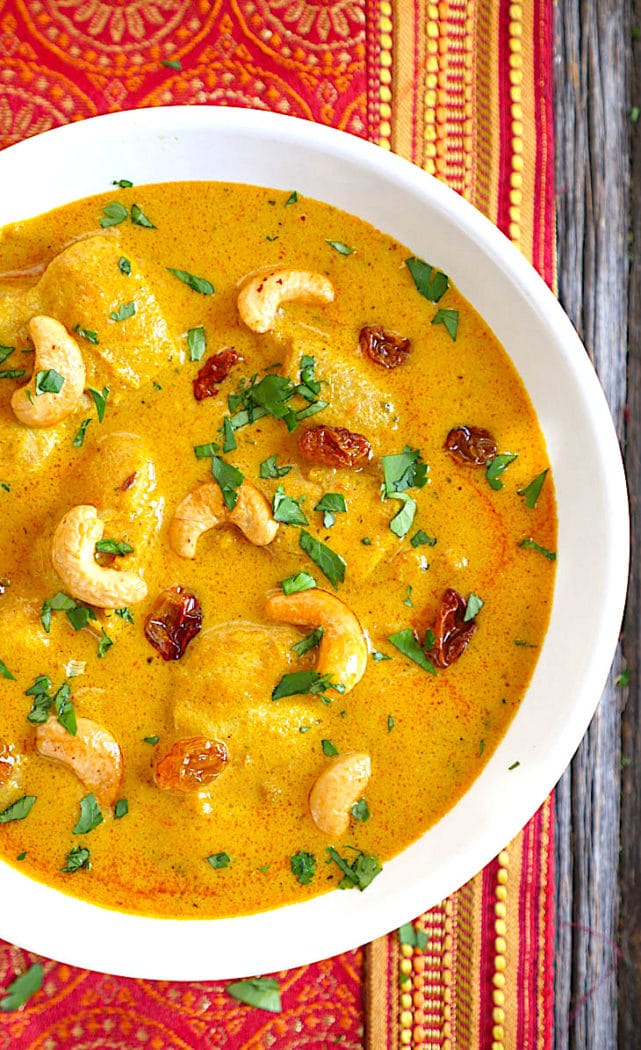 Citizens, welcome to the final installment of our series on how to make a proper British Indian Restaurant (BIR)-style curry – we conclude with the mildest curry of the lot: chicken korma!

The Satan-born hellfire of phall may indeed make you bleed from all your orifices, and the Madras packs a good kick as well – but Korma is incredibly mild and ideal for those with spice intolerance.

BIR-style chicken korma is fascinating to me, as it is the closest to its distant ancestor from India – phall, Madras and tikka masala have no real analogues in Indian cuisine, but chicken korma is actually quite close indeed.

What differentiates BIR korma is the use of the ubiquitous curry base that is the foundation of all BIR curries – this is what gives it the distinctive flavor profile that Commonwealth curry lovers find intoxicating and irresistible.

In the United Kingdom, a korma as served in curry houses is a mildly spiced dish with a thick sauce that often features almonds, cashews or other nuts, and coconut or coconut milk. In the 21st-century, chicken korma has several times been cited as the most popular curry in the UK, replacing chicken tikka masala in surveys of public eating habits.

The Indian version has deep historical roots with Muslim Maharajahs of the classical period. The English name is an anglicization of Urdu قورمہ, more accurately transliterated qormā, and derived from a Turkic root.

The word korma is derived from Urdu qormā, ḳormā or ḳormah, meaning “braise”, and refers to the cooking technique used in the dish.

The Ain-e-Akbari (life chronicles of the emperor Akbar written by Abul Fazl) suggests that Korma was created in the royal kitchens of Akbar the great, and though Korma is not one of the 30 recipes mentioned in the Ain-e-Akbari (Akbarnama), it is safe to assume that its cooking method and ingredients have remained the same for more than 500 years.

The Indian version of this dish was always white to symbolize purity and the divine nature of the Emperor, but the British version is typically colored yellow.

As noted in a fantastic article on dawn.com, the history of chicken korma is inextricably tied to the royal Moghul court of India.

But some believe that the Korma has central Asian roots and is referred to askhorma, qorma, kurma and kavurma and its mughlai version was created in the 16th century through the experimentation of Rajput cooks in the royal kitchens of Akbar the Great, under the supervision of Mir Bakawal, the master of kitchens and one of the court navratans (Akbar’s nine gems).

The Rajput cooks on creating the dish, named it Korma, in honour of the warrior Rajput ‘Kurma’ tribe.

Korma literally means braising the meat, and the method for cooking Korma was initial braising of meat in ghee (clarified butter), yogurt and spices and then simmering it in water until completion; blanched and finely ground nuts were also used as thickening agents.

It is said that the cooks in the royal kitchens marinated the meat in yogurt, fried onions and spices before cooking it for the emperor’s dinner table, and after the initial braising of the meat, the dum-pukth method was initiated until completion, or open lid simmering, but the temperature was always controlled hence the yogurt was never allowed to curd.

The BIR chicken korma recipe I’ve created is 90% true to the UK original – I have, however, deviated from the norm with two heretical touches (both are optional). The first is that instead of coloring the dish yellow with food coloring (the normal way it’s done in curry houses), I instead call for saffron water, which is far more Indian.

I also call for golden raisins as a garnish, which is typical of the Indian chicken korma but not of the BIR version. I happen to like them in this recipe – if you so prefer, you can garnish with food-grade dried rose petals.

As with the other BIR recipes in the series, I strongly encourage you to read this fantastic tutorial before starting this or any of the other curries – it will give you the confidence to do it right!

Citizens, I am so happy you have joined me on this journey into the world of British curries – I hope you have learned a lot, eat well from it and teach others the unmitigated joys of chicken korma in the BIR-style! 🙂