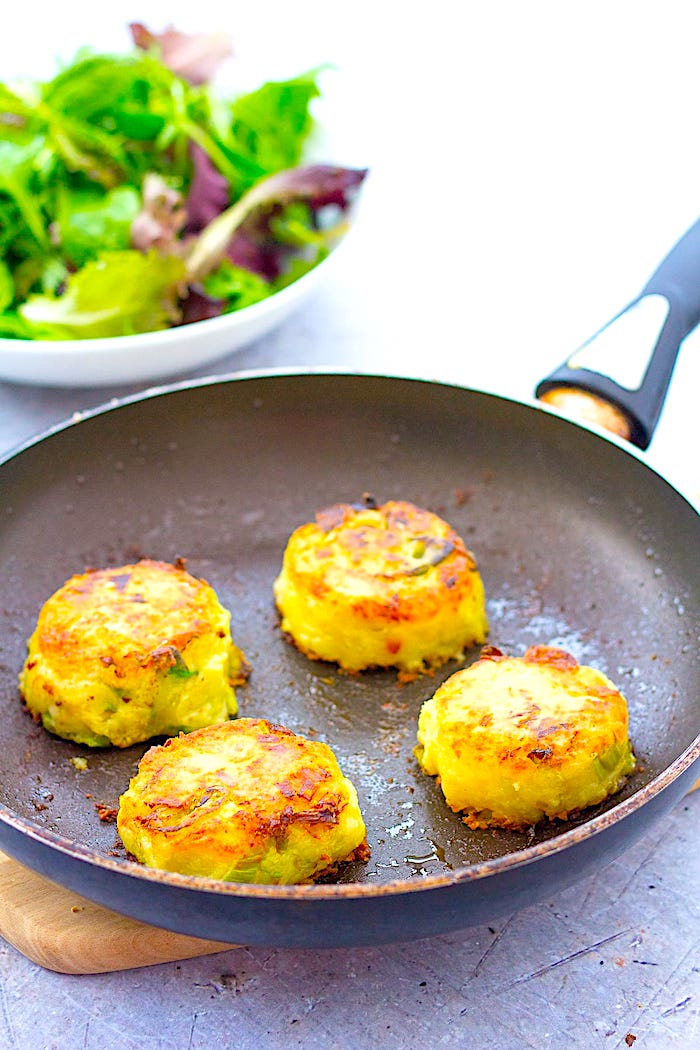 My Citizens! We continue our journey together, seeking out British recipes possessing unusual names with all alacrity and gravitas, and today is a doozy for those of you who enjoy ‘cute’ food names.

I speak of nothing less than that comforting and timeless classic of English cuisine known as bubble and squeak – a truly efficient (and delicious) way to use up your holiday leftovers in truly savory fashion! Stay with me at My right hand as we walk together on the royal road of British cuisine, though this particular recipe comes from the most humble origins imaginable – but it is still royal in my book! 😀

Bubble and squeak is a British dish made from cooked potatoes and cabbage, mixed together and fried. The food writer Howard Hillman classes it as one of the “great peasant dishes of the world”. The dish has been known since at least the 18th century, and in its early versions it contained cooked beef, however by the mid-20th century the two vegetables had become the principal ingredients.

The name of the dish, according to the Oxford English Dictionary (OED), alludes to the sounds made by the ingredients when being fried. The first recorded use of the name listed in the OED dates from 1762; The St James’s Chronicle, recording the dishes served at a banquet, included “Bubble and Squeak, garnish’d with Eddowes Cow Bumbo, and Tongue”.

A correspondent in The Public Advertiser two years later reported making “a very hearty Meal on fryed Beef and Cabbage; though I could not have touched it had my Wife recommended it to me under the fashionable Appellation of Bubble and Squeak”. In 1791 another London paper recorded the quarterly meeting of the Bubble and Squeak Society at Smithfield.

The dish as it is made in modern times differs considerably from its first recorded versions, in which cooked beef was the main ingredient and potatoes did not feature. The earliest-known recipe is in Mrs Rundell’s A New System of Domestic Cookery, published in 1806. It consists wholly of cabbage and rare roast beef, seasoned and fried, as noted in the image below.

This method is followed by William Kitchiner in his book Apicius Redivivus, or The Cook’s Oracle (1817); in later editions he adds a couplet at the top of his recipe:

When ‘midst the frying Pan in accents savage,
The Beef, so surly, quarrels with the Cabbage.

Mrs Beeton’s recipe in her Book of Household Management (1861) similarly combines cooked beef with cabbage (and, in her recipe, onions) but no potato. An 1848 recipe from the US is similar, but adds chopped carrots. In all of these, the meat and vegetables are served next to each other, and not mixed together.

In 1872 a Lancashire newspaper offered a recipe for “delicious bubble and squeak”, consisting of thinly-sliced beef fried with cabbage and carrot, but not potatoes, although by then they had been a major crop in Lancashire for decades. In the 1880s potatoes began to appear in recipes. In 1882 the “Household” column of The Manchester Times suggested:

Bubble and Squeak. – Mash four potatoes, chop a plateful of cold greens, season with a small saltspoonful of salt and the same of pepper; mix well together, and fry in dissolved dripping or butter (three ounces), stirring all the time. Cut about three-quarters of a pound of cold, boiled beef into neat, thin slices. Fry slightly over a slow fire six minutes. Put the vegetables round the dish and the meat in the centre. Serve very hot.

Potatoes featured in a recipe printed in a Yorkshire paper in 1892 but, as in earlier versions, the main ingredients were beef and cabbage. Possibly because of the scarcity of beef during food rationing in and after the Second World War, by the latter half of the 20th century the basic ingredients were widely considered to be cooked and mashed (or coarsely crushed) potato and chopped cooked cabbage.

Fiona Beckett (2008), like Smith and Dickson Wright, stipulates no ingredients other than potato and cabbage, but there are many published variants of the basic recipe. Gary Rhodes, for example, favors sliced brussels sprouts rather than cabbage with gently cooked sliced onions and mashed potato, fried in butter – a version I heartily endorse.

He comments that although the basic ingredients of bubble and squeak and colcannon are similar, the two are very different dishes, the former being traditionally made from leftovers and fried to give a brown crust, and the latter “a completely separate dish of potato, spring onion and cabbage, served almost as creamed potatoes”.

My version of this recipe closely hews to tradition and to make sure, I use a BBC recipe as my base to adapt from. My changes are to optionally add a few fresh herbs and a bit of roasted garlic to the mix and to – again optionally – add some bacon fat to the butter when you fry it up to add some smoky savor (along with the bacon to the final product!).

This is an incredibly easy dish to make (yes, I’m surprised too, given my usual magnetic pull to complex recipes) and it is a great favorite of mine during the holiday season, when I have tons of mashed potatoes to use up somehow.

I truly hope you enjoy bubble and squeak as a true taste of England, my Citizens – until our next parlay, I wish you well! 😀 Consider making this as part of a delicious English post-holiday brunch, perhaps served with some classic British Brown Sauce on the side!