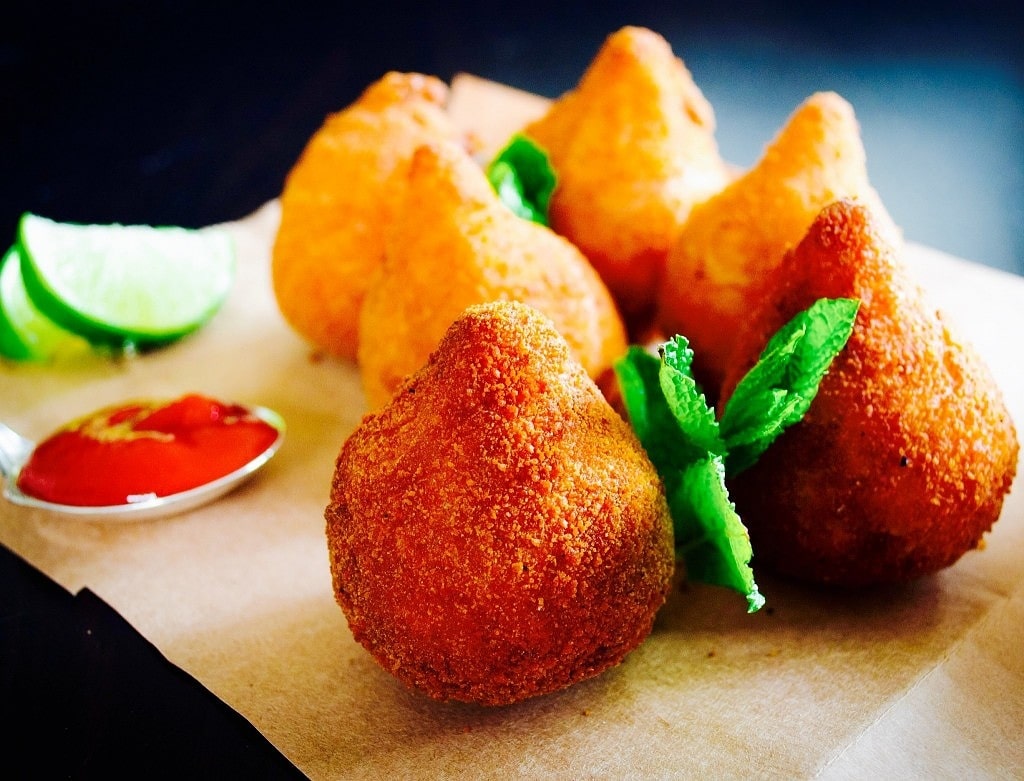 Citizens, today I give you a truly delicious recipe from Brazil with a fascinating Royal pedigree!

Coxinhas are a popular street food in Brazil, consisting of a filling made with chopped or shredded chicken meat, covered in dough, molded into a shape resembling a chicken leg or a teardrop, then battered and fried.

Specifically, the coxinhas are made with dough made from wheat flour and chicken broth and optionally mashed potato, which is filled with shredded spiced chicken meat.

The filling consists of chicken, and onions, parsley and scallions, and occasionally tomato sauce, turmeric and catupiry cheese. The coxinha is coated in batter, then in bread crumbs or manioc flour and deep fried.

It is shaped to roughly resemble a chicken leg. The dough used to coat the filling is generally prepared with the broth of the chicken, enhancing the flavor of the coating.

As noted in a fascinating blog post on flavorsofbrazil.blogspot.com, there is a remarkable story associated with this dish:

With that in mind, perhaps you might enjoy this possibly apocryphal fairy-tale story of how the coxinha was invented in Brazil more than one hundred years ago. We learned the tale in a recent issue of Brazilian magazine Gula, which incidentally featured a number of articles on the coxinha. The story goes something like this:

One upon a time (actually toward the end of the 19th Century) in the small city of Limeira, Brazil, lived a princess named Isabel. She was normally called simply Princess Isabel, though her real name was Princess Imperial Isabel Cristina Leopoldina Augusta Micaela Gabriela Rafaela Gonzaga.

She was their heir to the Brazilian throne, and was married to a European count, Gaston d’Orléans, Count of Eu. The couple lived on an estate called Morro Azul (Blue Hill) in this small town.

The count and the princess had four sons. One of the boys was kept out of public view, as he suffered from mental illness.

This young prince refused to eat anything other than chicken thighs (coxa is the Portuguese word for thigh, and coxinha means “little thigh.”) , Because he was a prince, the boy’s strange dietary habits were indulged and the cook of the estate prepared chicken thighs daily for him.

One fine day, the cook found that she didn’t have any chicken thighs for the boy, though there was plenty of chicken meat left over from the previous day’s feast. In desperation, she shredded some left-over chicken meat, wrapped it in a ball of dough and then shaped the dough into the form of a chicken thigh.

She breaded the concoction and fried it, then presented it to the young prince. She told him that it was a special little thigh (coxinha) fit only for a prince. He so loved the treat that from that day forward his diet changed from real chicken thighs to his cook’s coxinha. He would eat nothing else.

Soon, other family members began to demand these coxinhas, and word spread throughout Limeira about the cook’s marvelous invention. The fame of the coxinha grew and grew, and eventually its fame and its recipe traveled all throughout the country. And everyone lived happily every after (while snacking on coxinhas, of course).

My version of Coxinha is resolutely traditional and supremely delicious – be sure and serve it with an artisinal hot sauce and plenty of beer, as they do on the streets of Rio! This is truly one of my all-time favorite dishes from ANY cuisine, and I hope you see fit to try it at your earliest possible convenience, my Citizens! 🙂 These would be enahnced by the spicy heat of these Brazilian pickled peppers served on the side!