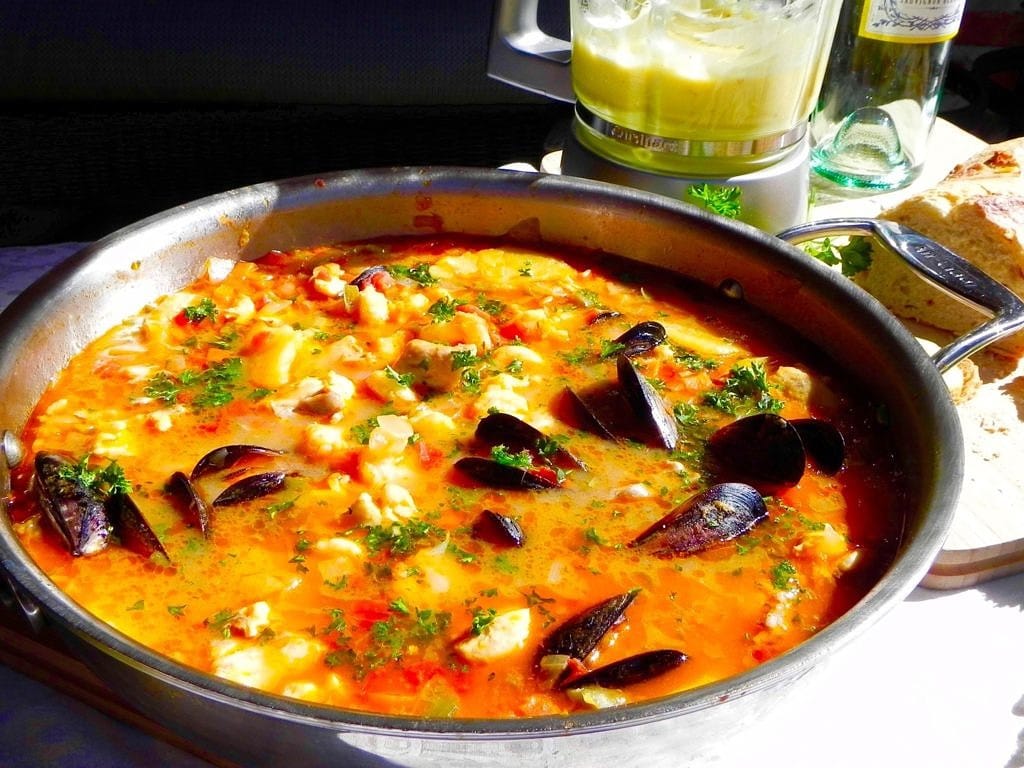 Citizens! Bouillabaisse, a rich and fragrant fish soup, is the most famous product of Marseille, the oldest city in France and a rare treat to be enjoyed amongst the finest of company and with much celebration and joie de vivre!

In fact, bouillabaisse may be as old as the city — some guesses place the dish’s origins with the seventh-century B.C. Greeks who founded the city, maybe bringing with them the fish stew they called kakavia.

Others say it may have been born of a 19th-century French restaurateur’s desire to use as many of the Provençal fish as possible. Or from a fisherman’s need to use the fish that no one else would.

The French and English form of bouillabaisse comes from the Provençal Occitan word bolhabaissa, a compound that consists of the two verbs bolhir (to boil) and abaissar (to reduce heat or simmer).

Like its origins, what makes a “true” bouillabaisse is heavily debated. The Marseillais will say that the real thing is only made with an assortment of seven fishes, including the incredibly hideous rockfish (not often found in the U.S.).

Others define bouillabaisse not by the fish, but by the unique combination of flavors: saffron, olive oil and a strong licorice flavor from Pernod (I personally prefer and use Absinthe).

The broth is traditionally served with a rouille, a mayonnaise made of olive oil, garlic, saffron, and cayenne pepper on grilled slices of bread.

What makes a bouillabaisse different from other fish soups is the selection of Provençal herbs and spices in the broth; the use of bony local Mediterranean fish; the way the fish are added one at a time, and brought to a boil; and the method of serving.

In Marseille, the broth is served first in a soup plate with slices of bread and rouille, then the fish is served separately on a large platter or, more simply, as Julia Child suggests, the fish and broth are brought to the table separately and served together in large soup plates.

My recipe is based closely on one by Alain Sailhac, the legendary French chef who started in the four-star kitchens of Le Cygne and Le Cirque and then became executive vice president and senior dean of studies at the French Culinary Institute in New York.

Alain Sailhac’s Bouillabaisse is as canonical as it gets – I’ve adjusted some seasonings, and most ingeniously (IMHO) added some purée of uni that I feel adds the true breath of the sea to the soup’s aroma. It also helps to color the soup, thus serving double-duty!

Rouille (pronounced ROO-ee), which means “rust” in French, is a necessity in any true bouillabaisse and gets its name from its lovely red-orange color. However, it’s the flavor that makes rouille the classic companion to bouillabaisse. Made with hot chiles or cayenne pepper, raw garlic, saffron, and in my version, thickened with cooked potatoes, it’s served on a piece of toasted baguette, floating in the sea of the stew.

, but it is delicious beyond measure! I hope you will give it a try! 🙂