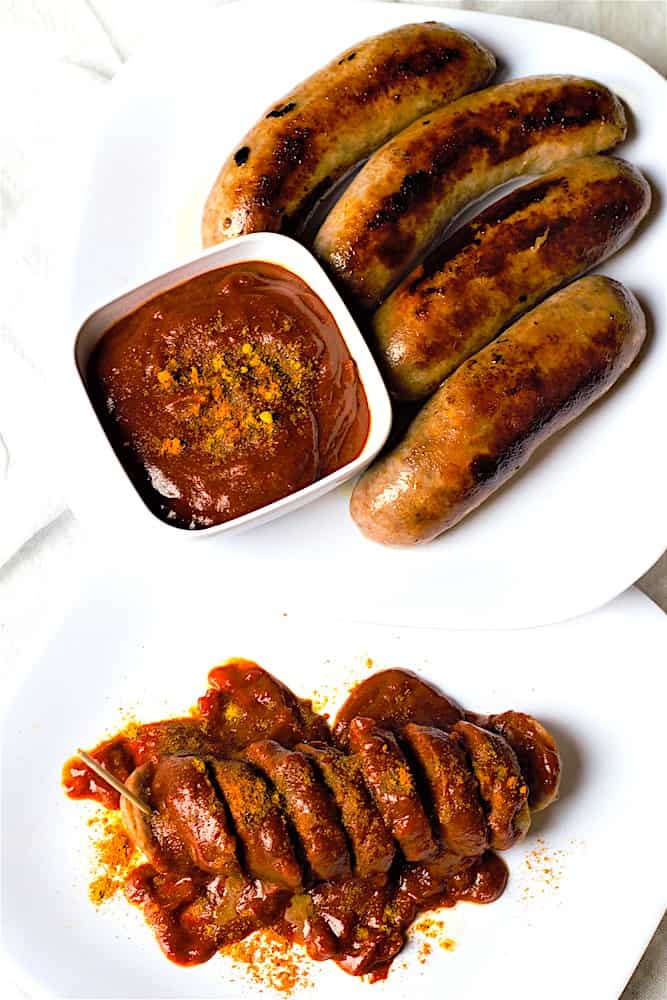 Citizens, your ageless and semi-Divine Leader – the demigod who ALONE is TFD! – has seen many days behind Him, and I remember well that fateful day when the Berlin Wall finally fell!

I have been privileged to have visited Berlin many times, both before and after the Wall and I ALWAYS dine at least twice while there on the city’s best street food – currywurst!

What is currywurst, you ask? Allow the sagacious one to enlighten you, my gastronomic acolytes!

Currywurst is a fast food dish of German origin consisting of steamed, then fried pork sausage (German: Bratwurst) typically cut into slices and seasoned with curry ketchup, a sauce based on spiced ketchup or tomato paste, itself topped with curry powder, or a ready-made ketchup seasoned with curry and other spices. The dish is often served with French fries.

The invention of currywurst is attributed to Herta Heuwer in Berlin in 1949, after she obtained ketchup (or possibly Worcestershire sauce) and curry powder from British soldiers in Germany.

She mixed these ingredients with other spices and poured it over grilled pork sausage. Heuwer started selling the cheap but filling snack at a street stand in the Charlottenburg district of Berlin, where it became popular with construction workers rebuilding the devastated city.

She patented her sauce under the name “Chillup” in 1951. At its height the stand was selling 10,000 servings per week. She later opened a small restaurant which operated until 1974. On 30 June 2013 Heuwer’s 100th birthday was celebrated with a Google Doodle.

Today, currywurst is often sold as a take-out/take-away food, Schnellimbisse (snack stands), at diners or “greasy spoons,” on children’s menus in restaurants, or as a street food and usually served with french fries or bread rolls (Brötchen).

It is popular all over Germany but especially in the metropolitan areas of Berlin, Hamburg and the Ruhr Area. Considerable variation, both in the type of sausage used and the ingredients of the sauce, occurs between these areas.

Common variations include the addition of paprika or chopped onions; halal food stands often prepare currywurst with beef sausage. Often currywurst is sold in food booths, sometimes using a special machine to slice it into pieces, and served on a paper plate with a little wooden or plastic fork, mostly a Currywurst fork. It is also sold as a supermarket-shelf product to prepare at home, such as Meica CurryKing.

The currywurst is an icon of German popular culture. Former Chancellor Gerhard Schröder is a noted fan of currywurst. By tradition, every candidate for the mayor of Berlin is photographed at a currywurst stand.

The Deutsches Currywurst Museum opened in Berlin on 15 August 2009, commemorating the 60th anniversary of its creation. Curator Martin Loewer said “No other national German dish inspires so much history and has so many well-known fans”. The museum receives approximately 350,000 visitors annually.

Citizens, my currywurst recipe is authentic to the Nth degree – it is not difficult to make and I have every confidence you will love this tasteful recipe bridging east and west! The sauce is a TFD original and I am certain you will love it – but there is one unusual ingredient: a hint of baking soda. This is used in some recipes for currywurst sauce to neutralize the excess acidity of ketchup and I find it works well in that capacity.

I am very particular about my ketchup, which is the base of this sauce – and this is the only brand I can recommend using.

One should – of course – use only German mustard in this as well. Dusseldorf-style is my choice for this recipe.

Lastly, the curry powder. This is the heart and soul of the dish, and it is imperative you use only the best, IMHO. My choice is this one.

I have every confidence you will love this recipe – please attend and give it your every consideration!